The Spy Who Stayed Out in the Heat

In case you were wondering, (not) I've decided to describe our most recent travels while they are still fresh, and then I will return to our teaching experience in China and travels to other parts of Asia.

We are on the road again, or rather we have just returned from an 11 week jaunt to Southeast Asia. At the suggestion of so many of our Burmese refugee English students, including our favorite monks, we began this latest excursion with a visit to their troubled country. 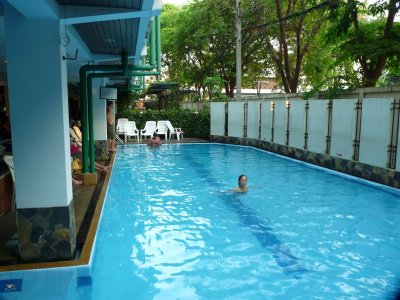 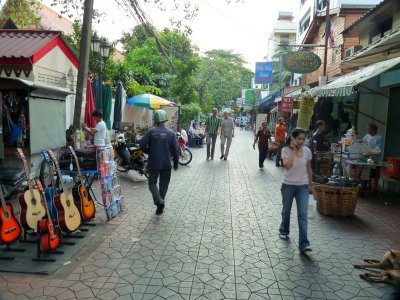 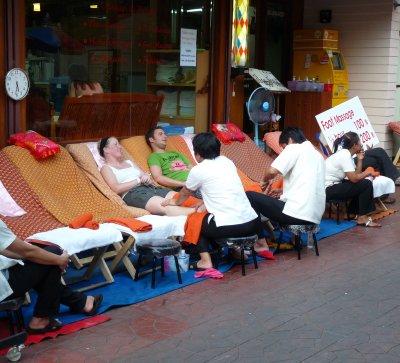 I am reading The Forever War, about Iraq and Afganistan, and am reminded how US soldiers came here for R@R from Vietnam. Now it is mostly young backpackers and families resting up in between their travels. Iraq is too far away for these new soldiers, but with the cheap street food, Thai prostitutes, cluster bombs and phosphorus, jihadis instead of gooks, the sense of historical deja vu is nearly complete. The only thing missing is the napalm, but you don't need that in the desert. The jaunty disco music in the background rounds out the picture. Fuck You, Fuck You, very, very much. I kid you not.

In our bathroom the sign reads: To Flash Toilet Push Handle Until Finish.

After a couple of semi-comatose days recovering from the 26 hour flight, we took a long taxi ride to the only Burmese Monastery in Bangkok, which just happens to be run by the nephew of my English student, the Sayadow or head monk, here in Rensselaer. 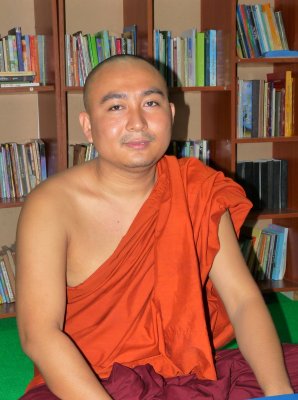 He has a boyish, infectious energy, just like his Uncle, and was quite pleased to see us, especially as we had agreed to sponsor him for a visit to the US. Also there was an ex-professor of ethnobiology, Dr Myint, who seemed quite knowledgeable about many things, and who spoke English well. He said he had a wife and daughter in Yangon and was planning to return in a few days. Another gentlemen, with even better English told us he had been living in Thailand for 10 years, but was hoping to gain political asylum in Copenhagen.

In typical Burmese fashion, they fed us a huge meal, though I ate little, already having some stomach problems adjusting to the food.

The beds at New Siam were much harder than I remembered, or was I just getting older?

Jon, your politics are time-warped and wrong in many many ways - I'm really surprised at you.. Your comparison of the wars in Afghanistan and Iraq to the US War in Vietnam is amazingly uninformed (I'm being very polite) and is wrong is not only in the obvious geo-political and moral but also the conduct of the war. Just because that corner of the world looks like the 60's the rest of the world is not. (our age excepted). Otherwise, have a great trip ! -- Dave

Hey Dave,
Good to hear from you, but you're starting to sound like a, gasp, Republican. Smarter people than I have pointed out some of the parallels between these wars, but to mention a few of the obvious ones: 1, in Iraq we were lied to about WMD's just like we were lied to about the Gulf of Tonkin, and for the same reasons, a bunch of arrogant policy wonks wanted to go in there for a long time and needed an excuse, 2, there never was any connection between Sadaam and Al-Queda, just like the domino theory, it was a bunch of hogwash, 3, we killed lots of civilians in all three places thus alienating the local population, most of whom didn't want us there in the first place: 4, we never learn from history, ie, French in Vietnam, British in Iraq and Russians in Afganistan. What makes us think we can succeed when they failed? In Afganistan,5, we are backing a corrupt and drug supported government, Karzai, just as we did in Vietnam. This is not to say we should do nothing about Muslim extremists, but as long as we continue to back corrupt and dictatorial regimes all over the Middle-East, ie Egypt, Saudi Arabia, Yemen, etc, we don't stand a chance of defeating them. And of course,we are indirectly financing them through US petrodollars spent in Saudi Arabia.

I have reread your blog I think it is very good, humoristics and describes "The real Bangkok"
Elona