Yangon or is Rangoon?

Show me the Money

We arrived in Burma/Myanmar a couple of days ago after a short and cheap flight. The mysterious Dr. Myint, who we met at the monastery in Bangkok, was on our AirAsia flight. A bit of coincidence you say. He then called our hotel, Panda, and left a message that the phone number he had given us was no longer valid because he wasn't staying with his wife. He left another number and suggested we get together. We returned his call, but couldn't reach him. The next day he showed up unannounced, early in the morning, just as we were headed for the hotel breakfast. Okay, so we invited him to come with us, and in a rather untypical fashion, for the Burmese, he let us pay. The conversation at breakfast was innocent enough. Where were we going? What did we want to see? etc., but the whole thing struck me as a bit odd. The coincidence of the plane, just showing up at our hotel, the wrong phone number. What did it all mean? I wasn't sure, but I began to have doubts that Dr. Myint was who he said he was. We had been warned not to discuss politics, but of course we figured we were among friends in the monastery, and we had not been the ones to bring it up.

Later in the day we met with another Myint, which happens to be a very common name in Burma. I'll explain later. Aung Myint is the brother of one of our English students. He is 33, single, and ekes out a living as a one man publisher, historian and photographer. He came with his 70 year old uncle, whose English was much better. In Burma it is often the older folks who speak English, partly because Burma used to be a British colony, but also because there were a number of good missionary schools that taught English, most of which are long gone. Although English is now taught in school, generally the schools are really bad, deliberately kept that way by the military government. They want to keep people as uninformed as possible so that no one questions what they do.


Aung gave us a whirlwind tour of the city. First stop, a moderately upscale Burmese restaurant where we ordered far too much, not knowing that rice and other side dishes were served along with prawns, spicy meat, beans, dumplings etc. All was spread out buffet style, though it still wasn't easy to tell what everything was. Tasty, but not exactly the same Burmese food we were used to being served by our students at home. From there it was on to the used books stalls on the side streets of downtown. Most of the books were propaganda or well worn and ancient comic books. There were not many customers. The buildings of the city were dilapidated and moldy, concrete, with the occasional ornate, red brick, British Raj structure, for the most part, equally dilapidated. 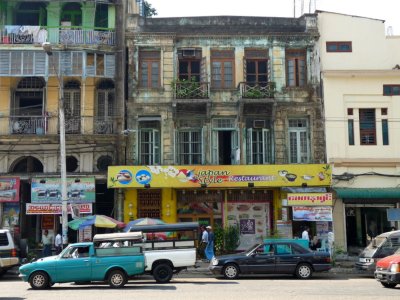 Some were still in use, the Justice Department for example, or should I say, Injustice Department, but the old Rolex building was empty and obviously not in the best of shape. 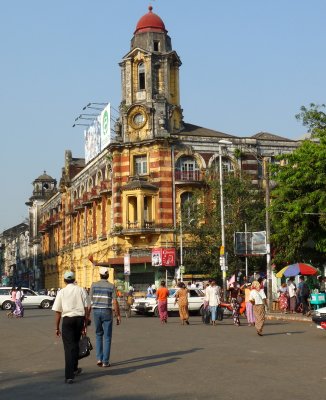 The streets were crowded with ancient cars and people, some in longyis, including Aung and his uncle, and others in western attire. You had to watch where you placed your feet if you didn't want to fall into the man eating cracks on the uneven sidewalks, or the occasional open sewers on the sides of the road. 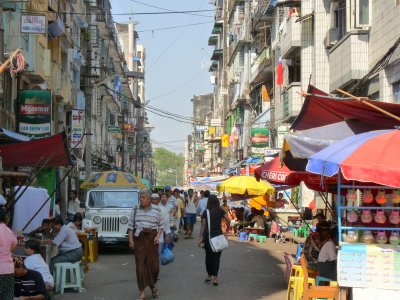 We went to some nearby art galleries, difficult to see because of the very spotty electricity. A mix of styles, some abstract, along with portraits of ethnic peoples. The owner was a friend of Aung's, and was very friendly to us. He spoke English well, and got into a lengthy conversation with Nanette about the work.


After a while, we stopped for coffee while Aung went to trade some of our dolllars for Burmese kyat, pronouced chat. The official exchange rate is 6.5 kyat to the dollar, but on the black market it is more like 1000. Of course, everyone uses the black market. Who control's that? Anyone's guess, but mine would be the government. On the black market, they only accept perfect US dollars, unfolded and uncreased, and for that matter only certain serial numbers. We knew this ahead of time, luckily. We figured we better cash $1500 US, because we planned to be in the country several weeks, and Rangoon seemed like the place with the best rate. No only that, tourists are often cheated, so we thought that it would be better to have Aung do it for us, and he was happy to oblige. Perhaps 15 minutes later he came back with a big, heavy sack of dirty money. We had to give them clean, new money, and they gave us back dirty (literally) money. I guess that fits. What did I expect? The largest bill is 1000 kyat, so Aung handed me a lot of them.

Is there honor among thieves? I doubt it, but the bills were stacked in 15 piles held together by rubber bands. Well it looks right I thought, and heaved the money into my backpack. We were also carrying another $2500 US in cash. There are no ATM's in Burma. The good news is that there is very little street crime, thanks to the repressive government.

Shortly thereafter, the uncle, who was understandably tired after walking around in the heat, took his leave. Did I mention the heat? Sweat, sweat, sweat, all day long. Sun like the proverbial knife. And this was only the beginning of the trip. Did I get used to it? Hell no. The best time to go is November through mid January, their "winter." I can't say that the monks in the US didn't warn us, but we wanted to go during the worst part of our winter.

Before uncle left, Nanette had spotted an English copy of Lord of the Flies, that had somehow been overlooked by the censors. Probably they couldn't read it. She gave it to him for a present. It was cheap, but something he could never afford on his pittance of a pension. He seemed quite pleased, and said he would read it and then translate it.

Needing a break, we stopped off at one of the ubiquitous street side tea houses, which sell snacks and samosas, served on tiny plastic tables and chairs, just the right size for a two or three year old. It was here that Aung explained Burmese names to us. It was an interesting conversation since his spoken English is quite poor, but after a few cups of tea, we finally got it. It seemed to us that people from the same family had different surnames. As it turns out nobody has a last name in Burma, and most people are named for the day of the week they are born, not unlike the Sherpas in Nepal. So Aung is Sunday, and Myint is Thursday, but Aung also means success. Neither of these is a surname. So how does anyone know who is related to whom? There is no way to know from their names. Things are made more complex by the fact that each day of the week has several names. There are perhaps 20 or 30 combinations of names that almost everyone in the country has, male and female. No wonder they all sounded similar to us.


Then it was on to Sule Pagoda. Of indeterminate age, though not terribly old, it is a peaceful oasis in the middle of the din of downtown. It contains some interesting Buddha images and pictures of "power men," as Aung put it, princes and politicians from ancient times.

Looking Out Over the City Toward Sule in the Distance 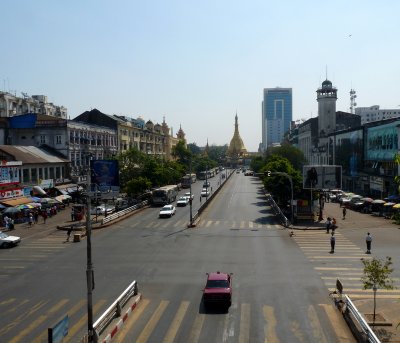 Nanette and Aung at Sule 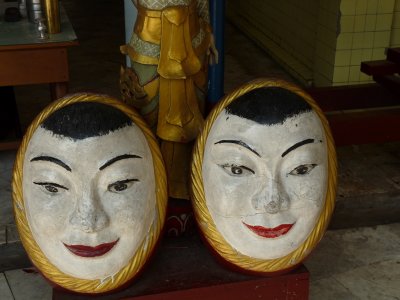 Hey Jon, thank you for your always interesting stories. I am waiting for your 'China Post'

Hi Jon and Nanette, we are following your travels with interest.
David and Grace in nz