The Panda was an interesting hotel, not at all like the usual backpacker places we often stay. At $30, by Yangon standards it was somewhat upscale, and seemed like it was full of Chinese businessmen. This is not really surprising when you consider that China is Burma's major trading partner, followed by North Korea for their weapons. We were the only westerners in the place, and I'm not sure what the staff thought about us. Why did these farangs keep getting so many calls from locals? And the concierge often got stuck translating for us on the phone. It seemed like each time we went out there was another message from a different relative of one of our English students. They all seemed to know when we were arriving, and they were coming out of the woodwork to meet us and show us around. And yes, we did have three sealed letters in Burmese to deliver to people in various parts of the country. We assumed they were personal messages for friends and family, but what did we know? Maybe they contained clandestine information. EVEN I WOULD HAVE BEEN SUSPICIOUS. No wonder DR. MYINT was following us. And where was he today? Was he going to show up again on our doorstep and invite himself to lunch this time? I was almost looking forward to another encounter, but I digress.

Late in the day we went with Aung Myint to Shwedagon. Having trouble keeping track of who's who here? Welcome to Burma where everyone, as previously mentioned, has the same name. As a reminder, Aung is the younger brother of one of our students, and not the aforementioned illustrious spy.

Shwedagon, as some of you may know, is the holiest pagoda in all of Burma. It is not just one pagoda, but a self contained city of pagodas, high on a hill overlooking the city. Some say it is more than 2500 years old while others claim it was built in the 5th or 6th century. No matter, it is breathtaking, especially at sunset, as the golden dome gleams in the fading light. There are major entrances at the four compass points, with long steps guarded by enormous lions. 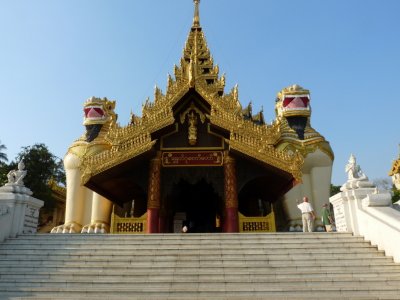 Looking Out Over Entrance From the Top 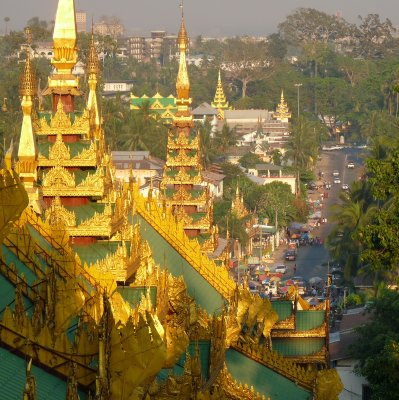 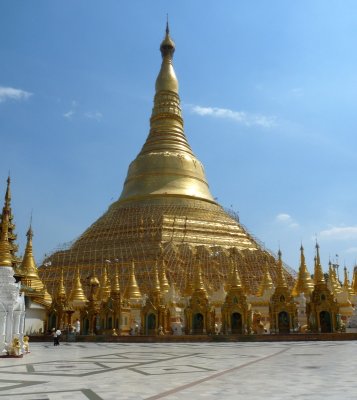 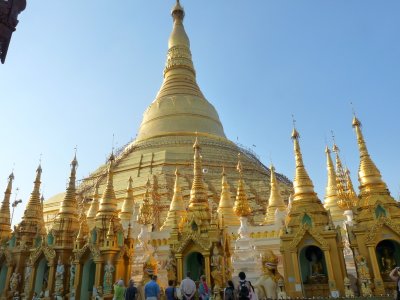 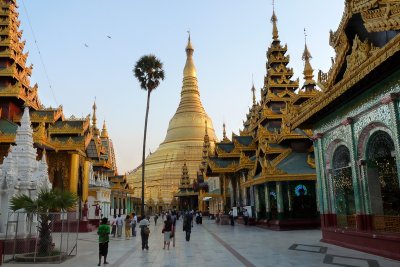 One of Many Small Pagodas On Main Plaza
' 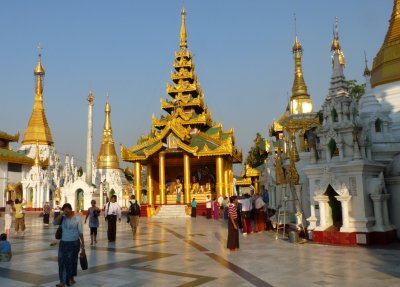 There are Buddhas and Arhats of all shapes and sizes, mythical beasts and elephants along with mirrored and tiled halls, many with commanding views of the city bellow. We wandered here for a couple of hours, awestruck by the dazzling beauty and opulence of the place, which stands in such contrast to the poverty all around.

Monk with Nanette and YuYu's Mother with Buddha Looking On 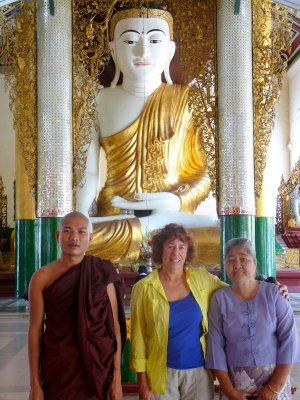 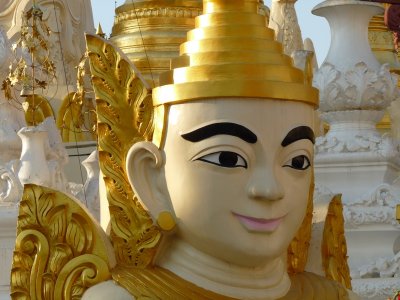 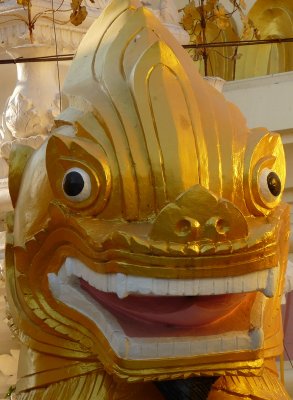 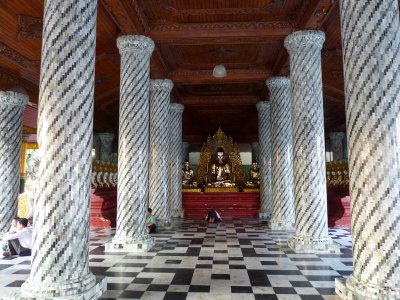 There were many tourists here, Europeans, though plenty of Burmese as well, thrilled no doubt to be in this holiest of places. There were monks of course, one seemingly near death as he simply stared at the pagoda while tourists obscenely took his picture. Others were old, and hobbled on canes as they shuffled across the wide open tile plazas. Still more, children really, 8 or 9 years old, hid between the gold and white columns giggling and bumping into each other as I took pictures. 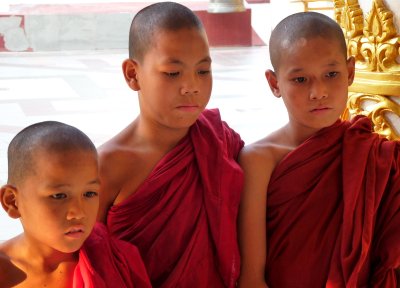 The setting sun created brilliant light and long shadows in between the domes and spires. We stopped our perambulations to sit and listen to a group of chanting nuns, as it dropped below the horizon. The lights slowly came on, illuminating the main pagoda, the military apparently making sure that the electricity worked here.

As we started to leave, the monks prepared to light, by hand, seven thousand oil lamps surrounding the dome.

Shwedagon has a shimmering, unreal quality to it, hovering over the city below with its dirt and despair. Here that seems far off, as the faithful genuflect in front of the many Buddhas, wishing for a better existence, or perhaps an end to all existence. Nibbana. 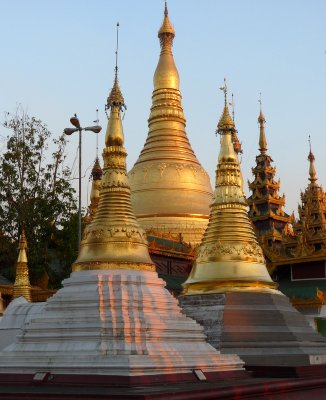 Another, smaller pagoda, built by General Ne Win ( father of the current regime) to improve his karma, seems to wink at us as we clamor into a taxi, exhausted after a very long day.

Hi John,
As usual, am so fascinated by the places you go to... and this is one place that I have been thinking of going to for the longest time .....
Loved this piece ( and your sense of humor)... saw Nanette in one of the pics too... do give my regards to her and tell her i'll write soon
till then.. take care... keep writing your blog

Thanks Pramila. Always glad to hear that people are reading blog. Jon

Hi Jon..Your writing is wonderful, both the great lead-in to what promises to be a very interesting story and your travel observations and commentary! And Shwedagon is awesome, perhaps even more powerful than the Potala Palace (or at least the view of it that the Chinese allow us) - and your photos are great too! Talk soon. Love, Suzanne

Thanks again to everyone who has written to me with comments, Jon

Hi Jon & Nanette - Wow! Those temples are truly amazing and now I feel like I've been there thru your great pictures & description of the sunset. Seems like you found Shambhala! Rhinda