Pakse to Tat lo: On the Bolaven Plateau, Laos

After an uneventful night in Bangkok, I flew to Ubon Ratchathani in northeastern Thailand, and then took a four hour bus ride across the boarder to Pakse in southern Laos. Pakse, a city of perhaps 80,000 to 100,000, is fast becoming the commercial hub of this part of the country. It remains a rather nondescript and hot, dusty place at this time of year, despite its location on the Mekong. New and rather expensive hotels are however springing up and tourists are coming to town to sample the pleasures of the Bolaven and Don Dhet, which are quite nearby. Based on the recommendations of Chee, who I met on the bus, I ended up at the Lankham Hotel. Nothing to rave about, but centrally located and cheap. On the other hand, the staff at this family run place were wonderful, very friendly and welcoming and right next door is one of the best noodle shops in town, open for breakfast and lunch. Interestingly, there are a couple of Indian restaurants across the street which are open for dinner.

Chee is a Malaysian national making a visa run from Thailand to Laos, and seemed quite knowledgeable about Pakse and surrounds. He told a rather mysterious tale of volunteering in northern Thailand for a year, after running his own computer business in Malaysia. His wife was still there, but was intending to join him in Thailand. He indicated that slowly the Malaysian government was caving in to Muslim extremists and that the country was becoming more Islamic, making things difficult for Buddhists like himself. He didn't say this, but perhaps his intention was to immigrate to Thailand on a more permanent basis and his volunteering was a way to do it. He left early the next morning to return to Ubon.

Also on the bus was Elona, a single, Israeli woman about my age. She had come from a 4 month stint in Nepal. volunteering in an orphanage in the mountains, and was traveling for several more months. Since she was headed for the same places in Laos as I was, we became traveling companions. The next morning we spent several hours checking out local tours to the Bolaven, which seemed highly commercial and expensive, and so we eventually opted to take the local bus to Tat lo, about two hours away.

We were dropped off a couple of klicks outside of town, but luckily a sangthaew came quickly by to take us the rest of the way. This was actually prearranged by Anselm, aka Ben, a French expat in his mid 20's who had been in Tat lo for some six months. 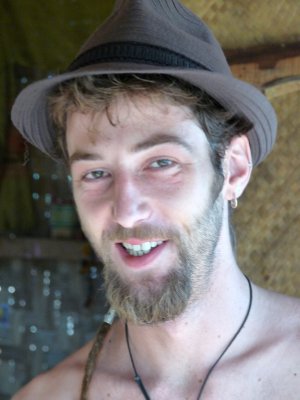 An interesting character, he has learned a fair bit of Lao and built himself a bamboo bungalow on land owned by the guest house where we are now staying, based of course, on his recommendations. 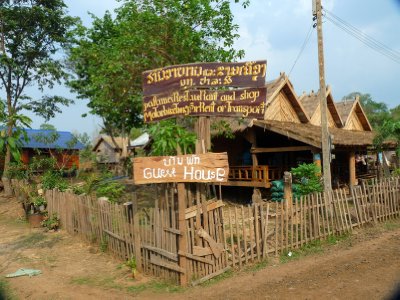 With a little barter, the people here helped him to build it. Every six months or so, he returns to France to make jewelery with stones purchased in India. On one of his trips he happened onto Tat lo and fell in love with the Lao people. Here, as in so many places in small town Laos, everyone seems to smile and wants to make conversation over rice wine, even with very little English. 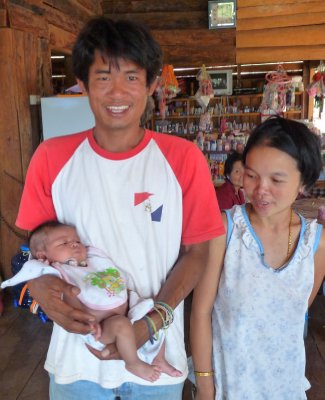 Tat lo is a very relaxed village on the plateau, with one main street and an idyllic setting on a river. 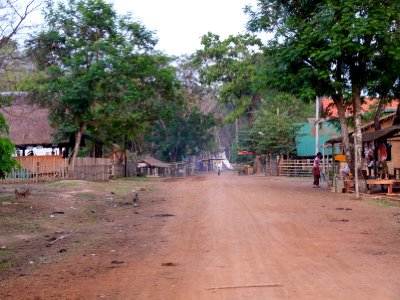 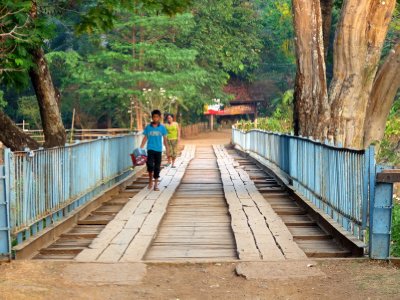 There are several waterfalls on the edge of town and it is easy to while away a few days here swimming and sunning on the rocks. It is just now being discovered and will likely change dramatically in the next few years. Right now it is one of those places where parents farm and take care of children and then children take care of them. No one has much, but they seem to have what they need. School is a low priority it seems, as many children spend all day playing in the river. Naked young boys and fully dressed teenagers of both sexes, push and flirt while frolicking in the many rock pools. 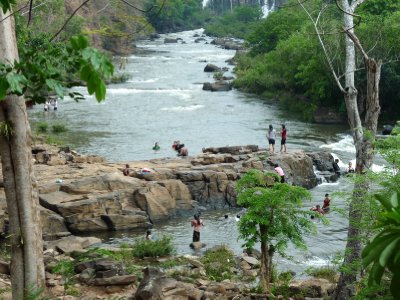 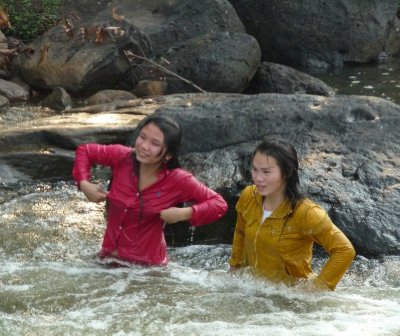 Occasionally an elephant passes by, owned by a nearby and relatively upscale resort. 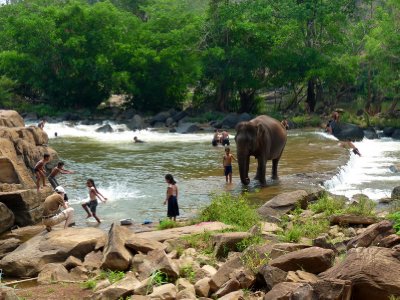 
View of Swimming Hole at Sunset from Deck 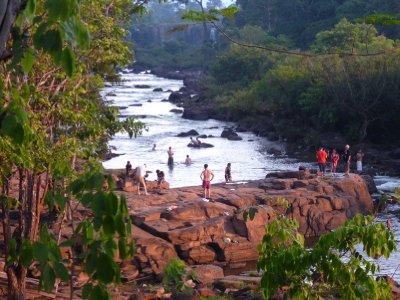 It was hot here, though not as oppressive as Pakse. We did manage a few treks along the river to view other falls and see some nearby villages. 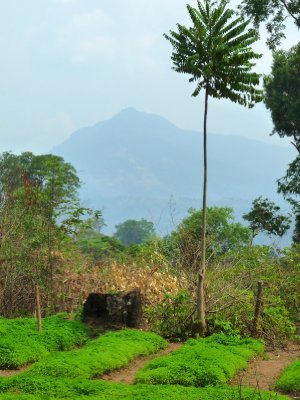 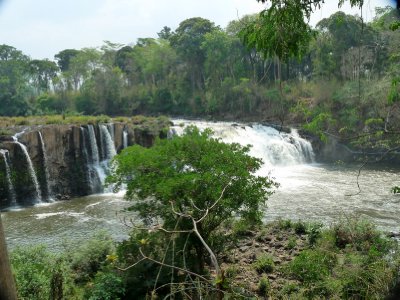 Dinner was usually at a variety of local eateries with an assortment of Euro travelers and various locals who happened by. Occasionally though, Elona and I opted for slightly more upscale fare. My favorite was always the spicy papaya salad, and I don't even like papaya.

Pap had long since disappeared, but mama served up huge and cheap portions to many a wanderer who happened in there based on Anselm's recommendation. We ate by candlelight since there was usually no electric. 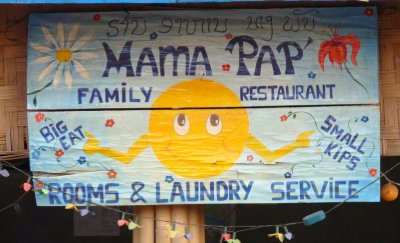