The next morning we set out for Paleochora, following the same route we had taken to Elafonisi two days earlier. This time, instead of stopping at the cave church we went for a walk in the gorge, until we came to a old stone bridge, thick with cedar and other deciduous trees. 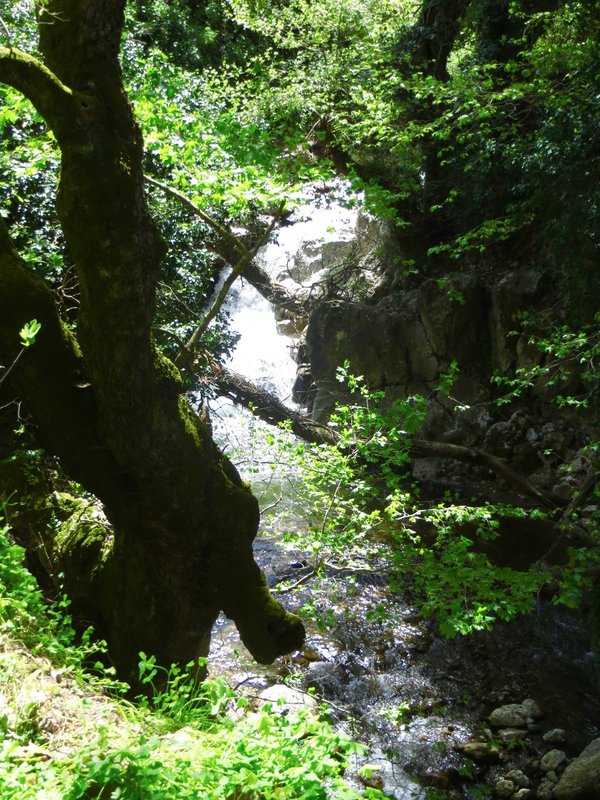 On the way back, we were careful not to step on the bees which swarmed around the clover. We saw more wild, bright red/orange poppies moving in the stiff breeze and the small, but intense yellow and white flowers. We made a short detour to stop back in Elos for another plate of boureki, but the taverna was closed, and we had to make due with one of their competitors. We drove on through forests of evergreens and olive plantations, and briefly stopped in Kandanos, site of a big resistance battle during WW 2. Today, after being rebuilt, it is a sleepy, tidy place with folks, well men, sitting outside a small cafe. 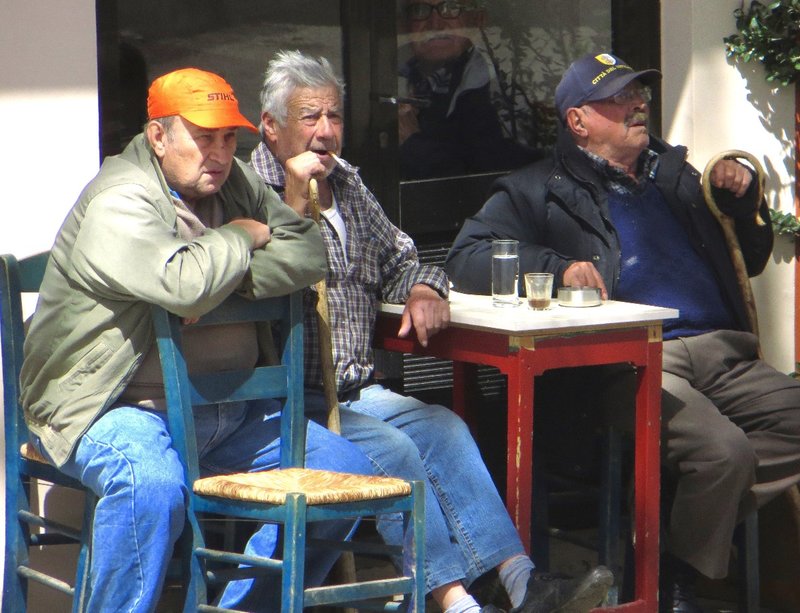 A few kilometers further, at the end of the road, we arrived at our destination, Paleohora.

It has about two thousand residents, and plenty of small hotels, guest houses, and tavernas, enough to handle the larger crowds of summer. It is slowly being developed as a resort area, but still manages, at least thus far, to hold onto its small town charms. 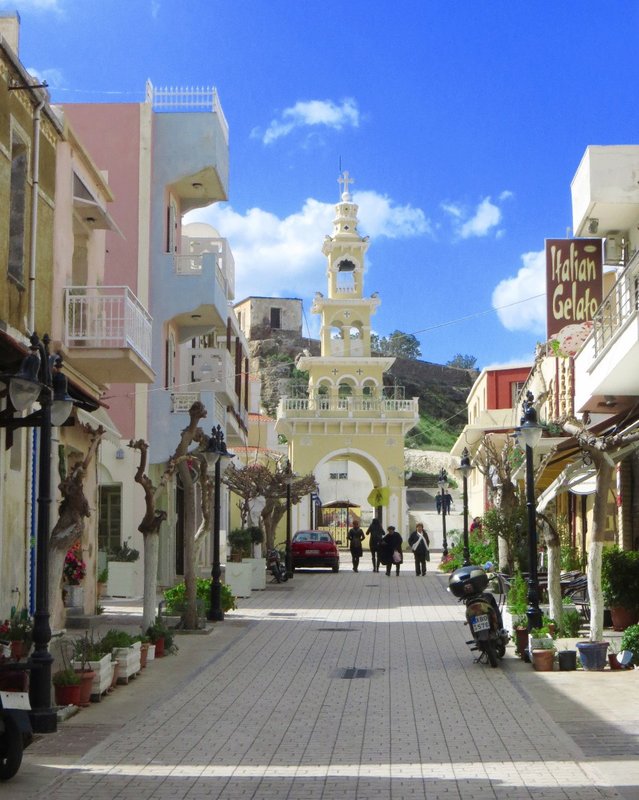 Our guest house, where we rented a small apartment for a week, is about as cute as can be, and serves up what is probably the world's best breakfast. Not a exaggeration.

Manto, who is also a Byzantine style artist, moved to Paleohora from Athens with her husband several years ago in order to build the place. 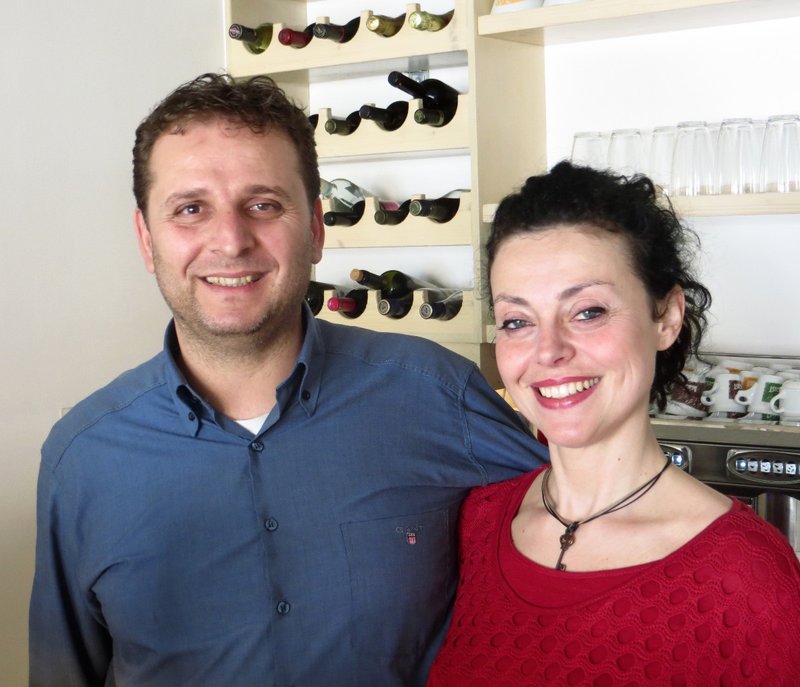 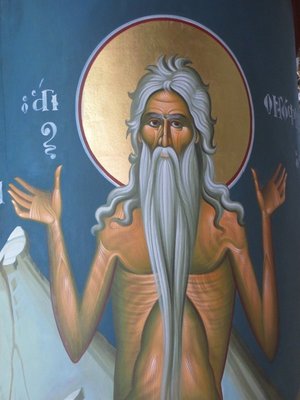 Unfortunately, as has been the case for most of this trip, the weather in Paleochora has not lived up to its billing as the warmest place in Europe during the winter and early spring. When the sun is out things are fine, but the weather can change in an instant, and the wind can blow fiercely. Yesterday, in anticipation of bad weather today, we undertook the 11K hike to Sougia, where we planned to take the ferry back to Paleochora at the end of the day. It was a highly enjoyable walk across the volcanic rocks near the beach, and then up and over some of the headlands nearby. 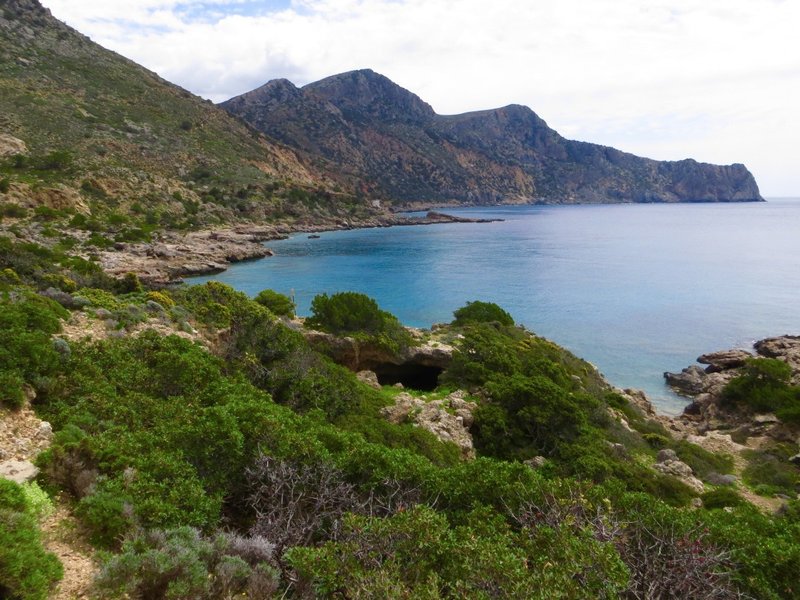 When the clouds parted, there were views of snow covered mountains in the distance. 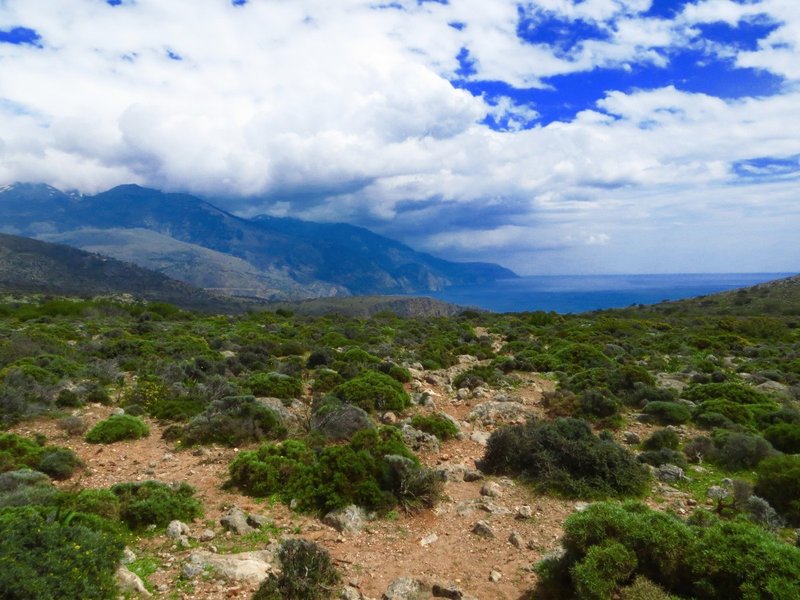 About 3/4ths of the way, we came upon Lissos, an ancient Minoan site, which was later occupied by the Greeks and the Romans. The original askepolis is still somewhat intact, as are the Roman mosaics on the floor. 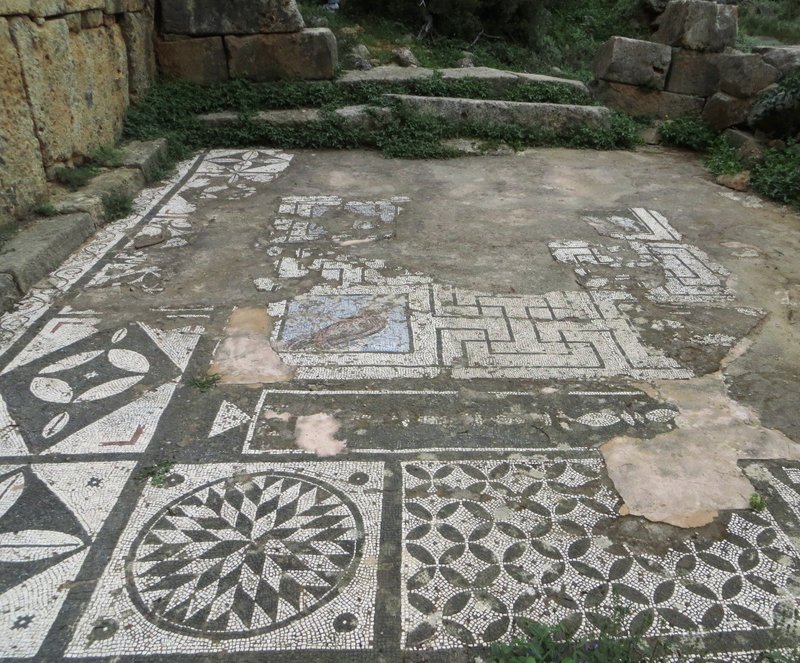 Greek letters on a nearby wall 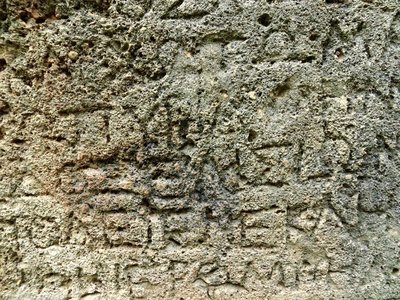 There were also numerous cave-like burial mounds scattered about, and the setting, below two rocky promontories, and not far from a small beach, seemed ideal for defending against enemies from all directions. To us, the place had an almost spiritual vibe, much more so than the famous Knossos, which is more extensive, but not nearly as beautiful. 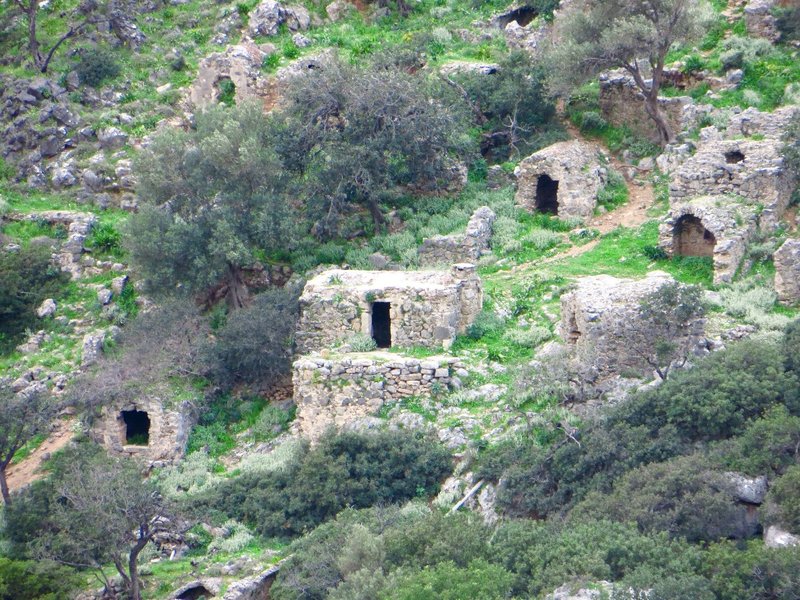 Extensive grounds of Lissos from higher up on the trail 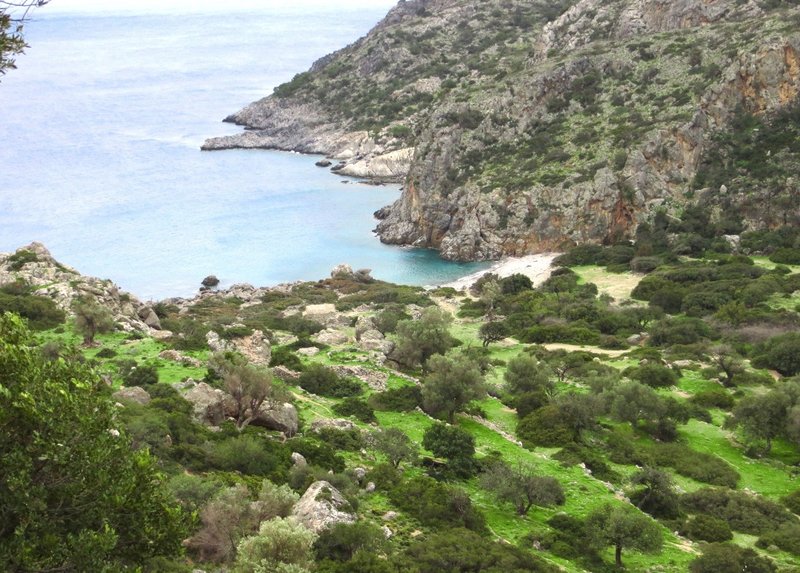 From Lissos we continued through an immense walled canyon, and fortunately we chose the right way, and arrived in the tiny village of Sougia, around 4:30 PM. There was time for a late lunch of fish soup and moussaka, before we walked over to the ferry dock. By now the wind had picked up considerably, and it started raining. The ticket seller let us wait in his small kiosk, after we heard him playing the mandolin. Trying to keep warm as the ferry was late, we chatted with a friendly Swiss woman, perhaps 10 years younger than us, who had taken the boat over in the morning.

The seas were not as rough as they could have been considering the weather, and we made it back to town without getting seasick. By then, the winds were practically gale force, and it was a struggle just to walk back to Manto's.

Although there was more rain in the night, the next day was largely dry, although the cold wind blew unceasingly for a full 24 hours. It reminded us of our time in El Chaten, in Patagonia. Tired of being cooped up for most of the day, we managed a short, blustery walk through town.

Choppy sea even in the harbor on that very windy day 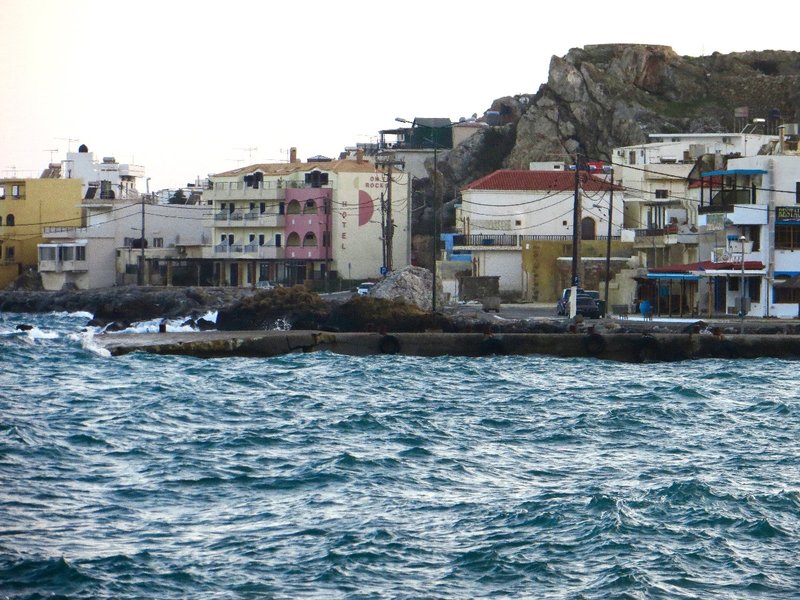 We stopped for coffee in a newer place next door to our favorite bakery. It had big plate glass windows facing the sea, and the gusts were strong enough to rattle the glass. At times, it felt like it might crack and shatter. Despite the wind, the place was crowded. Cretans are a very social lot, and often spend many hours sipping a coffee, or drinking raki in a cafe, chatting with their friends, and no doubt catching up on the local gossip. As time has gone on, we have fallen into this lifestyle ourselves, going for a late lunch, and sitting around with a cappuccino. We usually are not able to make it to the 10 or 11 PM Greek dinner time, and instead make due with an evening snack, after having a big mid-day meal.

View of the sea and mountains, just outside the cafe 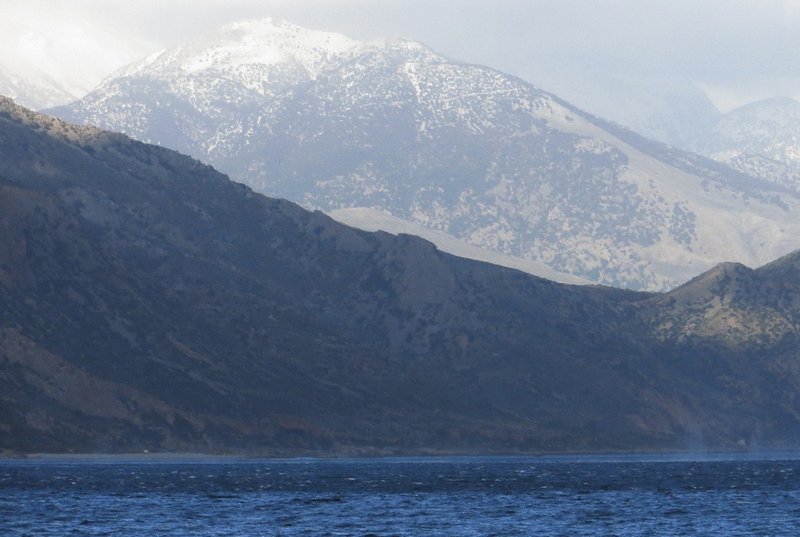 Paleohora has lots of great hikes. On another day, this one bright and sunny, we went along the shore in the opposite direction, towards Elafonisi. The sea was a clear, intense blue, and turquoise near the shore. 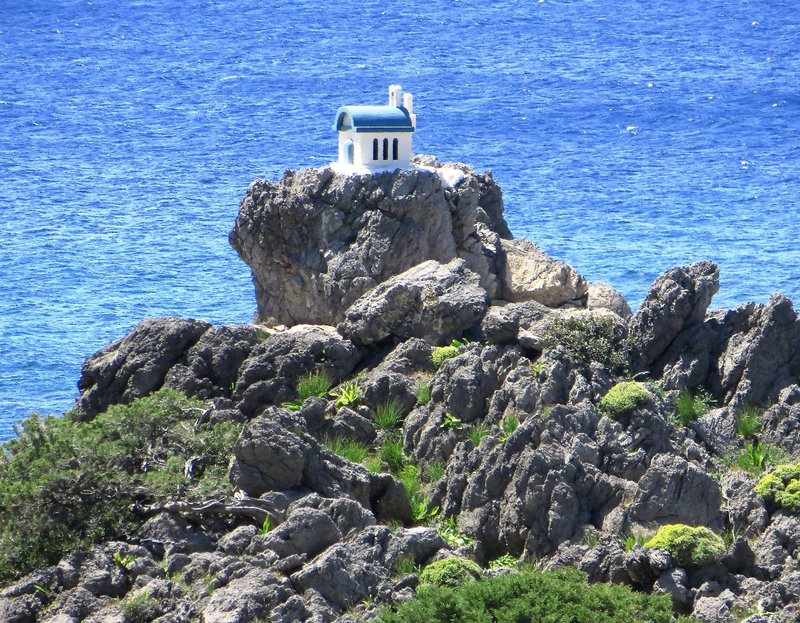 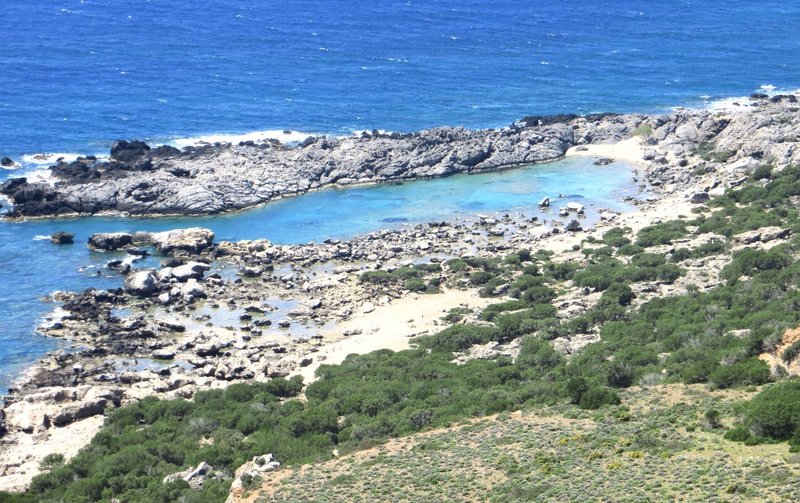 It is visible from most any vantage point, along with sharp and oddly shaped volcanic rocks that lie in the water, and across the smooth stone beaches that appear amongst the scrub vegetation at every turn. 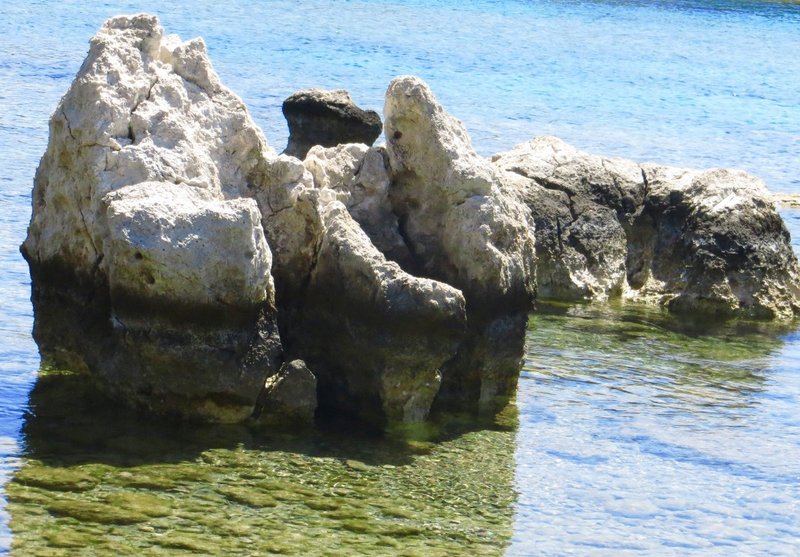 In the distance, also visible from many places along the trail, the snowy peaks of the Leki Ori Mountains stand in stark relief to the water. Rocky promontories stretch out like bony fingers, reaching toward the African shores of the Libyan Sea. Here we found Viena, the ruins of another Hellenic city. Though not as impressive as Lissos, which at one point had over 30,000 people, we saw parts of Greek columns lying on the beach near the water, and others that were partially submerged. None of this was even mentioned in our guide book. It seems that no matter what direction you choose to walk, there are ancient discoveries to be made. 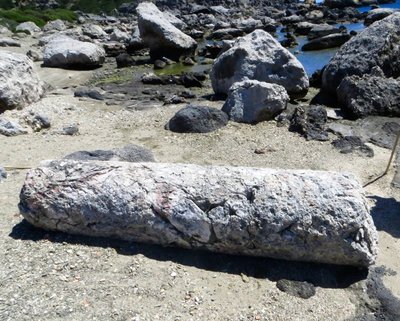 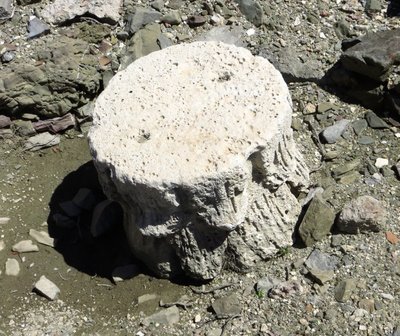 We spent some time just sitting on one of the larger deserted pebble beaches, feeling the soothing smoothness of the rounded stones. There is something comforting about holding the stones in hand, and of course, skimming the flat ones into the calm water.

It was easy to think about Odysseus plying these craggy shores more than 4000 years ago.

Shadows on the beach 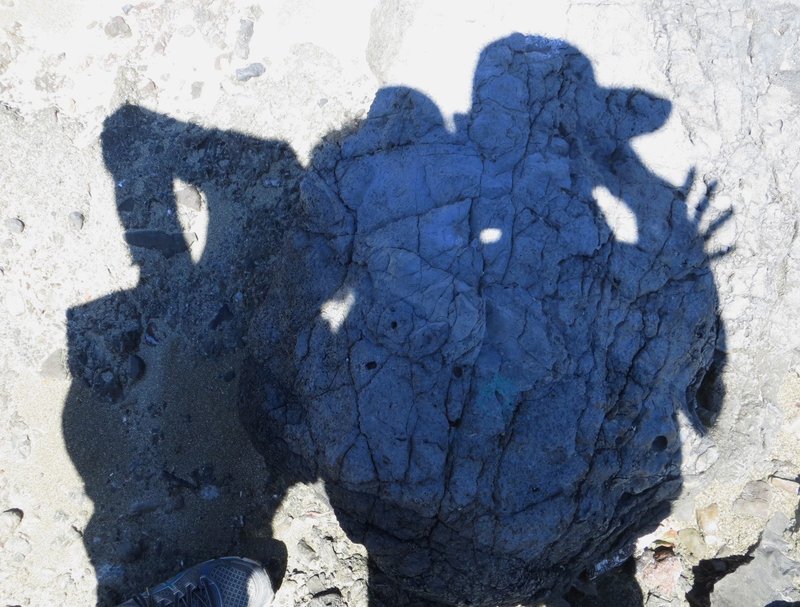 Returning to town, we had the traditional roasted lamb dinner in one of the few tavernas still open on Greek Easter Sunday. Afterwords, we strolled along the seawall, and heard a young mother calling out to her young son, Orfeo, Orfeo, as he trotted along the sidewalk as fast as he could. Another reminder of the ancient heritage of this island. One has the feeling that despite the economic problems, the Cretans,and probably most Greeks, feel very proud of their ancestors, and the rich culture they created.

At night, there were fireworks and a bonfire, along with a parade of Judas down the small streets of Paleochora.. Unfortunately, it didn't start until midnight and we didn't make it. In the evening of Good Friday, a few days before, there was a small candlelight procession with an effigy of the dead Jesus, who was carried from one church to another. Most of the candles had been blown out because of the wind, and it was cold so I didn't stick around for long. 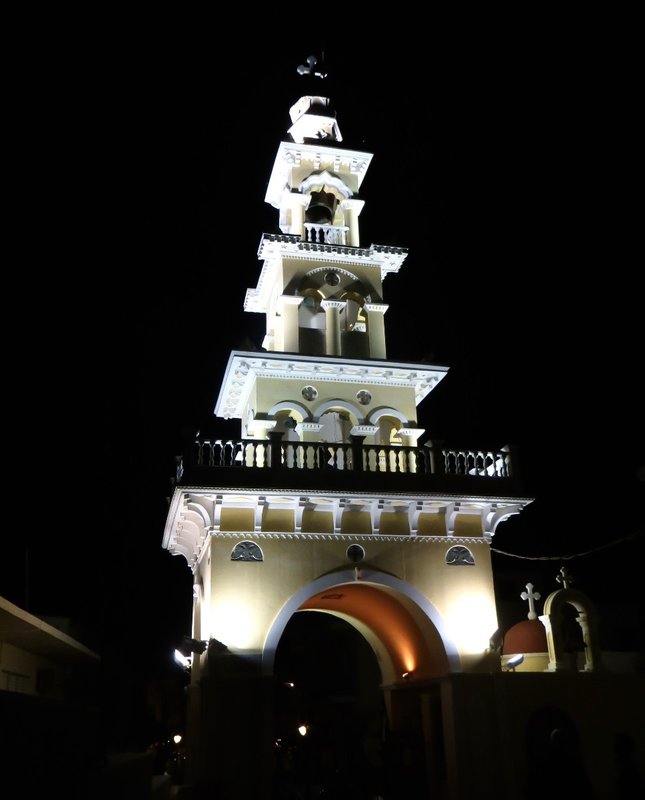 Our trip is coming to a close. Tomorrow we leave for Chania, and then fly to Athens at night. When the weather is good, which has been true the last two days, I am in no rush to return. In bad weather, a not infrequent occurrence on this trip, then home, with its added comforts, seems like a good idea after 10 weeks on the road. The Greek food continues to impress, as do the Greek people. They are always trying to feed you more. After every meal, raki and desert, even if you order another desert. Most everyone has continued to be extremely friendly and welcoming, including the folks at Manto's place. I will be sad to say goodbye.