It feels good to be back "home" in our little apartment, though it is strange indeed to contemplate our return to our real home in less than two weeks.

We have continued our explorations of the neighborhoods of Buenos, and spent an enjoyable afternoon at the Modern Art Museum and playing in the nearby greenspace.

Another day was spent in the leather shops of Calle Florida. We must have gone into at least half dozen places and there were many more. Ultimately we settled on one store which seemed to have the softest leather. We blew some bucks, and each ordered a custom jacket to be ready in 48 hours. 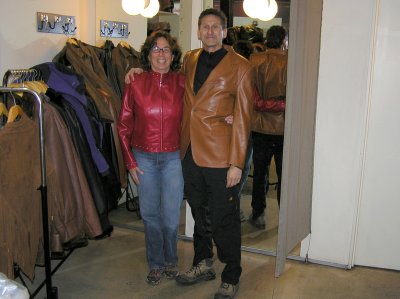 We met up (for the third time) with our friends EJ and Michael, who treated us to a lovely meal and at least three bottles of Malbec. They have shipped their Land Cruiser back home to England, full of chocolate from Bariloche, (which we heard melted in the heat of late Spring) and left for home yesterday.

We strolled along the Rio de la Plata eating choripan, a sausage and potato sandwich, which is sold in the many stalls nearby. Not good for you, but very good tasting. La Plata is a river in the sense that that the Saint Lawrence Seaway is one. Estuary is probably a better term. From there we walked to a nearby park and got a view of the city skyline through marsh grasses. 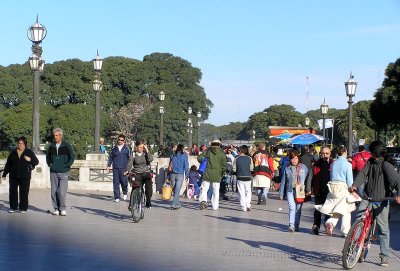 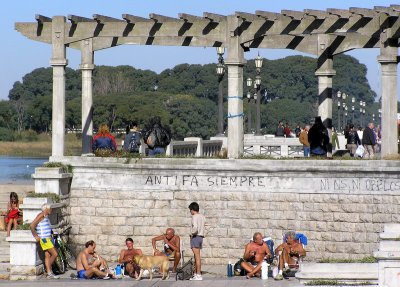 Intrepid Sun Worshippers by the Rio 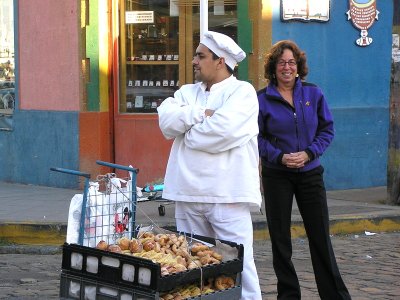 This Guy was selling donuts, but he seemed not to notice Nanette
Standing Behind Him. 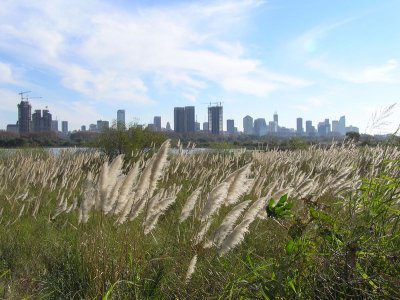 On one of our other wanderings, we took the subte to Recoleta, the cemetery of the rich and famous. It is like a small town with alleyways, ornate mausoleums, and saintly Catholic sculpture. "Saint" Evita is buried here, somewhat ironically, given her dedication to the poor and downtrodden. She is apparently in a crypt that could withstand a bomb attack, and there is good reason for that.

Evita was embalmed at the time of her early death in 1953, and then kept by a Peronist union organization while a special burial place was being prepared for her. When the army overthrew Peron in 1955, General and President Aramburu was concerned that her body would become a rallying point for the outlawed Peronist Party. Hence he had it shipped off to a secret location in Europe, purportedly in Italy. There it remained for many years. In 1970 the Montoneros, a left wing guerrilla group, kidnapped Aramburu, and killed him when he refused to reveal Evita's whereabouts. They tried to arrange a his and hers body exchange, but this never took place. In 1971 the army, apparently in a peace gesture, had it shipped to Peron's residence in Spain, though by this time he was remarried. He returned to Argentina a few years later, but without the body. It was not until after his death that Isabelita, his third wife, had it brought back. Evita was then interred in her final (until now at least) resting place. In another ironic twist, Aramburu is also buried in Recoleta.

At one point we thought we saw him, but it was hard to tell for sure. 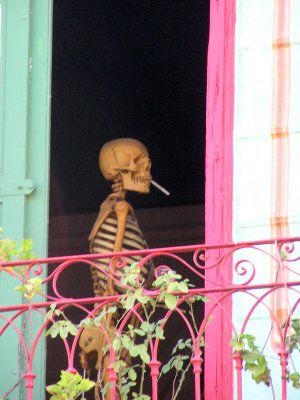 Juan Peron's body is in another location, and there have been issues with that too. In the 80's thieves broke into the crypt and sawed off his hands. They have never been found. (Sources for the above info include, Moon Travel Guide to Argentina, Washington Post, January 1, 1997, Scandalous Women, A Blog, October 17, 2008, by Laurel Thatcher Ullrich, as well as NY Times cited below).

According to psychologist Alberto Parkes, as quoted in the NY Times, October 13, 1996, the Argentine obsession with the dead is because of their inability to come to terms with their troubled past. Possible I admit, but also understandable is why there are more shrinks per capita in Buenos Aires than anywhere else in the world, including New York. In Argentina the (dead) body politic takes on a whole new meaning.

While we were in Buenos it seemed positively sacrilegious not to attend a tango performance. The Tango, by the way, was very much a lower class thing for years. It was a long time before it was seen as respectable, and became the national symbol that it is today. We had hoped to go to a Milonga, which are authentic public dances, often with lessons, and attended mostly by locals. The problem was they all seemed to start at midnight, and we old fogies just couldn't wait up. Instead we went to Cafe Tortoni and saw a more touristy production. Okay, but hokey. 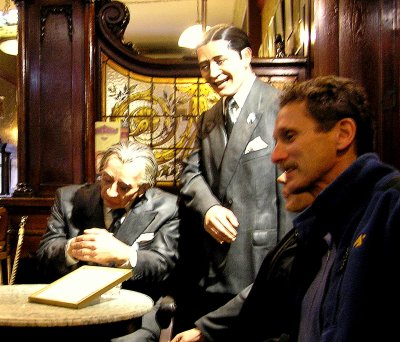 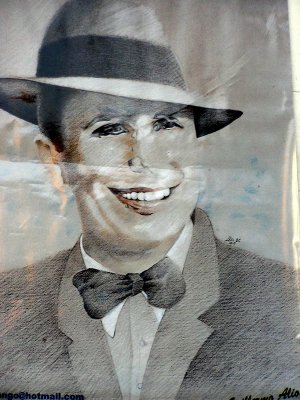 Another picture of Guardel, the Most Famous Tango Singer in Argentina,
though he was born in France.

On a different walk, we happened to pass a small downtown concert hall and saw that there was a tango concert that evening. That was the real deal. It was great, but unfortunately no dancing. We had seen some street dancing in San Telmo and LaBoca, and so didn't feel deprived. 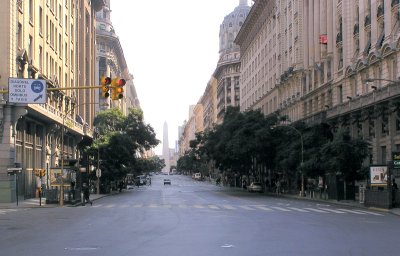 Deserted Downtown on the Weekend 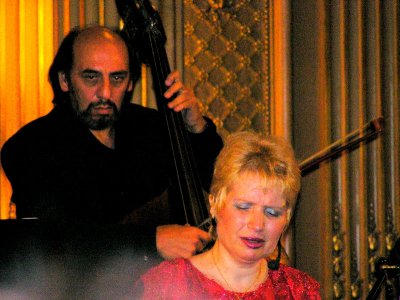 On our final excursion, we crossed over the Rio Plata into Uruguay to Colonia. This is easy to do and takes anywhere from one to three hours, depending on the type of boat you take. Colonia is a charming, and yes, colonial city, that is fun to walk around. It is full of old stone houses, cobblestone streets and byways; a very relaxing place to spend the afternoon. 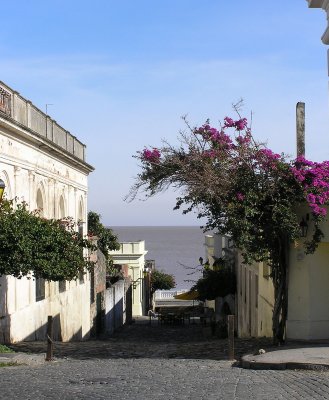 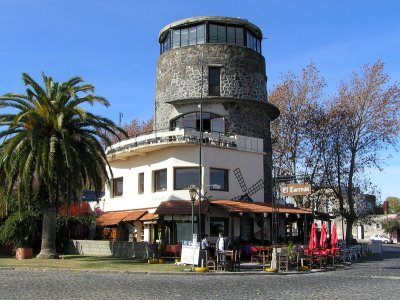 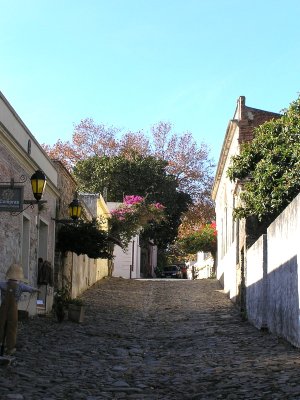 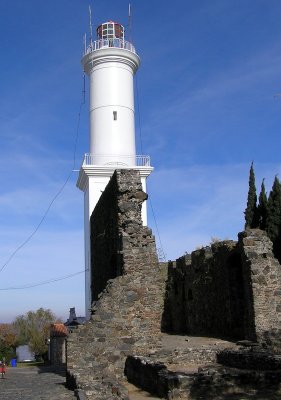 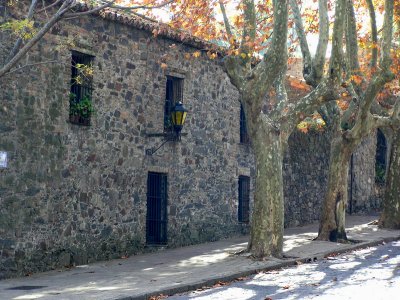 Strange indeed. We leave tonight, and as the trip is drawing to a close my experience of it, as with any period of time in the past, is becoming condensed. A little like an accordion being played at the last tango concert, some of the air is being pushed out. Is this the nature of all past experience? Does it all tend to run together over time with certain obvious exceptions? Does it all occupy the same psychological space?

Obviously some things we remember while others we don't. Is it the specific memory of something which gives it meaning? Is what we remember significant, and what we forget unimportant. It's not that simple. Sometimes I remember a detail or a sight that when I reflect upon it seems trivial. For example, I have been known to remember the name of a restaurant years later, and while I concede that food is of the utmost importance to me, I think the name is not. So the memory per se doesn't always confer meaning or imply importance. And besides, as I get older my memory is not as good as it was, and it was never that great.

So where is the meaning to be found? Is it in the sheer number or variety of experience? We all tend to limit the kinds and amount of experience we allow ourselves, and it is also limited by circumstances beyond our control. Should we all become peak baggers, ( like Adirondack Mountain Club 46ers), climbing as many peaks of experience as possible so that we can tally them up and keep track of them. Is travel like that too; like so many stickers on a suitcase, on the back of a car, or patches on a backpack?

I have to admit that I feel a certain amount of "pride" when I look through my passport and see all those country stamps in there. A little like "this car climbed Mount Washington, or Pike's Peak." How ridiculous. Who really gives a f...... (okay if the New Yorker can say it I can too), fuck. Alright, maybe I consider myself a kind of experience junkie. That's pretty silly too when I think about it. Really just a variation of been there, done that.

So what am I really trying to say here? The experiences that seems to matter are those that push us. These can be what we usually think of as bad, such as my prostate cancer for example, or they can be good, like a particular ski run down a steep mountain bowl, where every motion feels like flying. Either way, they challenge us physically, emotionally, or spiritually.

How does travel fit in? Travel pushes you. I want to be clear about this. Travel is not the only way to be pushed. There are obviously many ways, some planned, some not. Travel is one way. It is full of surprises. You don't really know what a place will be like until you get there, guidebooks notwithstanding. It is often challenging; dealing with poverty in Peru or illness in Bolivia. Sometimes just communicating in Spanish, and finding your way around a new place can be challenging. The point is that you are exposed to new things that are literally extra-ordinary.

As I think about this trip, I realize that this is what gives it meaning. It has pushed me in a variety of ways, many of which I can't even articulate or categorize now. I do know that I have certainly been very uncomfortable at times, really joyful at others, and sometimes amazed in a kind of WOW, LOOK AT THAT, way. So yes I have been pushed by much of the last 8+ months, and even before, just getting ready to leave. This has made me grow and expand to incorporate it all and I suspect that process will continue for a while now. In the end, it has made me feel more ALIVE, and GRATEFUL, as I've said before, for the opportunity to undertake this journey.


CODA: Well not really. In the immortal words of Daffy Duck, THAT'S NOT ALL FOLKS. By the time most of you read this we will be on our way to Burma to travel and visit U Kumala, one of the monks that we have taught English to over the past year or so. Now I know that all of you, my faithful readers, have been waiting with baited breath for me to answer the question, WHAT MONKS HAVE TO DO WITH IT? Now you know the answer, sort of. At any rate, I was hoping to blog this trip live as it were, but given the political situation over there, this does not seem advisable. And besides, I have to tell you all about last years trip to teach English in China, and travel to Southeast Asia, as well as trekking in the Indian Himalaya. So you can look forward to more postings from Vagabonding at 60. Actually, though I hate to admit it, I am now 61, but that's okay. I've decided that 59, and definitely 60, is OLD ENOUGH. However, as my late father used to say, consider the alternative.

SO NOW THAT I'VE GOT YOU INTERESTED, PLEASE STICK AROUND AND DON'T CONSIDER THE OTHER ALTERNATIVE (OR ANY OTHERS FOR THAT MATTER)


HOPING YOUR OWN ADVENTURES GO WELL AND CURIOUSLY


PS I LOVE GETTING YOUR COMMENTS. AND YOU KNOW WHO YOU ARE, OR COULD BE FOR THAT MATTER.

KEEP IT UP AND KEEP 'EM COMING