The Olympics and the Earthquake

On Tuesday we all trooped down to the ring road by the beach to watch the Olympic Torch Relay. It was a mob scene and it was impossible to tell whether or not the torch runners actually went by. About all we could see were a couple of Samsung and Lenovo floats with pretty girls waving to us from on high. The crowd was unruly, pushing and shoving. The police, who were few in number, tried to control the thousands of people, but were unable to keep them away from the path where the runners were supposed to be. What kind of a police state is this anyway? We later heard that because of the crowd, the runners were put in a bus and never did actually run along the intended path. Everyone was screaming GO CHINA and waving Chinese flags of all sizes. People were everywhere, including in the small trees along the road, some of which couldn't bear the weight and lost big branches.


The summer games are a very big deal here in China. Most people see this as their world debut and are very concerned that it comes off flawlessly. They have been deeply embarassed about the Tibetan demonstrations which, almost universally, they feel are unwarranted. 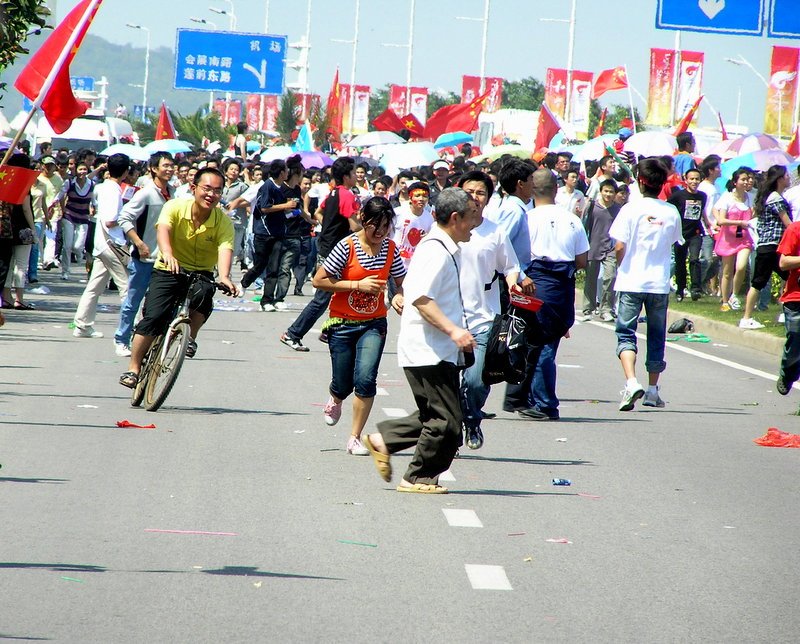 The next day we read about the big earthquake in Chengdu which didn't effect us at all in Xiamen. At first it didn't seem that bad, because the city itself was largely spared the worst of the damage. After a few days, however, it looks as though more than 50,000 people lost their lives, including many Tibetans. The Chinese press has been open about the whole thing, in contrast to previous disasters, and the premier flew out there and has spent a lot of time appearing on TV comforting babies and old people. They are obviously trying to prove to the world that they know how to handle themselves when something like this happens. The government is probably more sensitive to pr issues after their heavily criticized response to the Tibet demonstrations and their less than optimal response to the winter blizzards.


Many of the students seem openly moved by the loss of life, even to the point of tears. This is in marked contrast to their usual non-emotional demeanors. They have taken up a collection at the school to donate to the victims. On the other hand, they didn't really react to the loss of life in Myanmar, and the recent cyclone there, Nargis. They are much more focused on events in their own country, but perhaps this is no different than in most countries.

As one of the more mature students put it, this has been a difficult year for China. They thought they were going to have a smooth coming out party, but it has not worked out that way.

As a postscript, we learned that many local school children died in sub-standard buildings which didn't conform to code. In the school buildings built for the kids of government officials, almost no one died. There were many demonstrations in the weeks following the earthquake when this became apparent. A few low level officials paid the ultimate price, but when the demonstrations did not abate, higher ups in the party intervened and they were quashed by the army.

Last night, we went out to a classical symphony concert with a few of the other teachers. The soloist was a violinist from Chendgu, who played a very moving encore dedicated to the victims of the Sichuan earthquake. It turns out that the piece was orginally written to commemorate the holocaust. On the bus ride home, we sat next to a member of the orchestra who told us this.