In and Around Ubud

Ubud is a very new age, shop til you drop town, with an assortment of foreign restaurants, health food stores, yoga centers and spas. There are many small boutiques, art galleries, fabric stores, and even chain outlets such as Ralph Lauren. We saw more Americans here than in any other part of our travels, and there seem to be a significant number of folks who spend the winter. For me it would be too touristy and too hot, but at the same time, there is a vibrant cultural life , with dance and music performances almost every night, several good museums, and opportunities to take arts and craft courses.

The main streets are jammed with motorbikes and people, though nearby Monkey Forest is calm and serene, especially in the morning. This is true unless you happen to be carrying a bunch of bananas, in which case the monkeys consider you fair game. 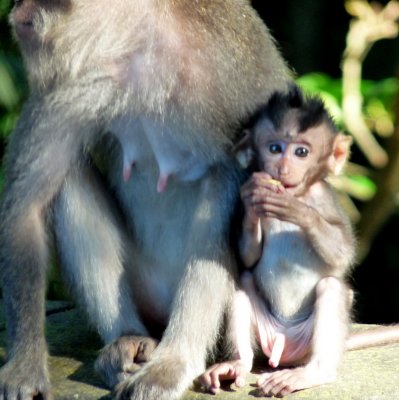 There is a stream running through the park, and many stone sculptures. 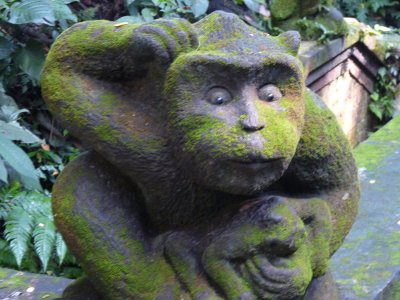 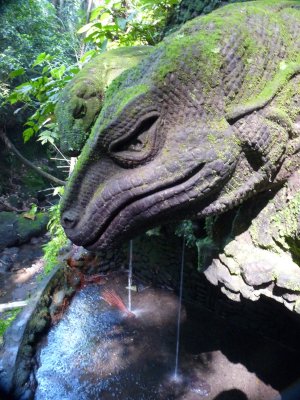 On one day, while Nanette took a batik class, I went on a bicycle tour. After we were dropped off by the van, it was blissfully all downhill. I was the only customer as Dewa had recently started his own company. We began with breakfast at a restaurant over looking two very green volcanoes. The lower one had a major eruption in 1975 killing thousands, and I could just about make out the lava track. 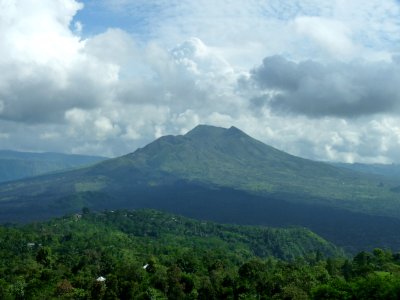 The higher of the two, Gunung Agung, was mostly in the clouds. 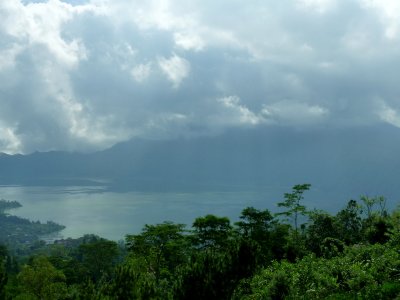 It was partially overcast for most of the ride, helping to shield us from the hot, tropical sun. The narrow road was bumpy, though mostly paved with little traffic, and led through rice fields and villages. Each village had three temples, Dewa explained, one for Brahma, Vishnu, and Shiva. 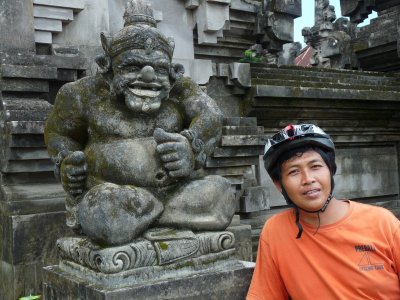 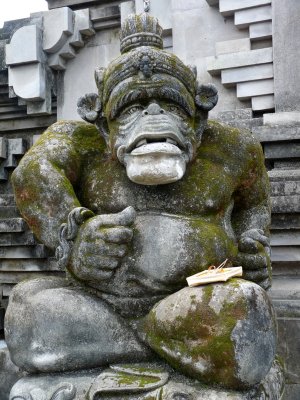 We had a couple of intentional detours through narrow dirt tracks in the jungle, as an added thrill, and wound up back in Ubud for a Balinese lunch at the family compound, prepared by Dewa's wife. Just now I am sitting on my terrace back at Raka's place, overlooking the gardens and koi pond, surrounded by banana palms and other broad leafed vegetation. I gaze out at sea of rust colored terra cotta roofs as a cool, moisture laden breeze blows, and the first shower since the beginning of our trip in Burma, falls gently from the sky.


That evening we attended a dance performance. The first part was a retelling of the Ramayana. 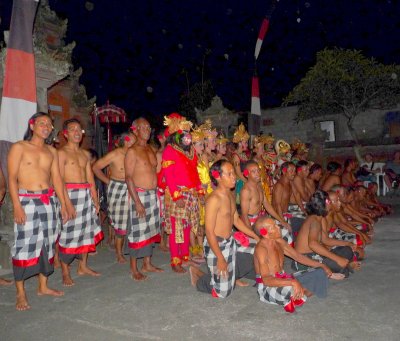 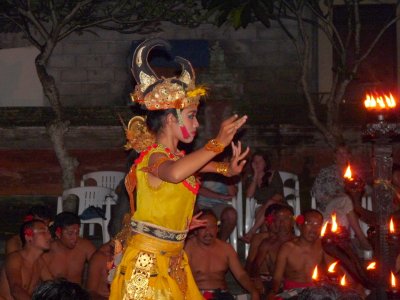 The second and very spectacular Trance Dance was next, with one dancer scampering and jumping amidst burning coconut shells for what seemed like 20 minutes. 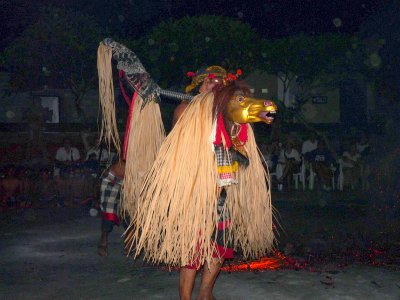 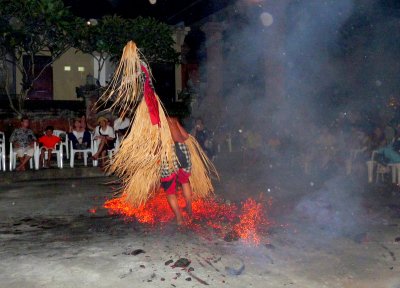 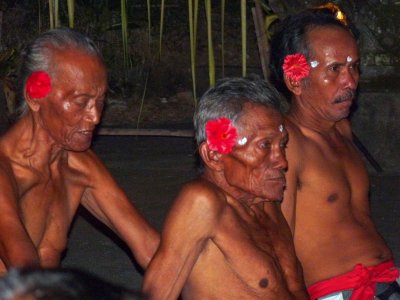 Ahh Bali. The very word conjures up exotic images of swaying palms, friendly people, frangipani, and the hypnotic sounds of gongs and gamelons. Yes, some of this is true, but after many years of tourism it feels more like a cross between the surfing culture of Southern California and the new age characteristics of Sidona, with a touch of the third world.

We decided to skip the crowded beaches of Kuta and Seminyak, full of drunk Aussies, or so we were told, and head directly for Ubud, at the foot of the mountains. We were extremely lucky to land at Raka House, a small family run guest house in an alley not far from the main drag. Complete with a small swimming pool, koi pond and views of the terra cotta roofs of the town, it was exactly what we needed. 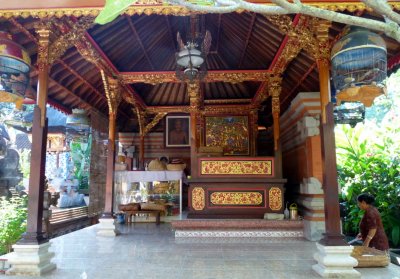 View from the Terrace 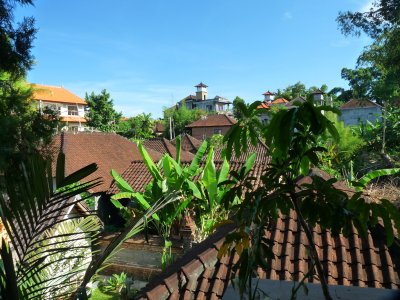 It was run by, you guessed it, Raka, a man around our age who spoke a little English. He used to be a cab driver, until he got a micro-loan to open his guest house in the family compoun. He was in the habit of referring to himself in the third person. "Raka think you like some tea?" "Raka tell you how to walk town." It was all part of his charm. 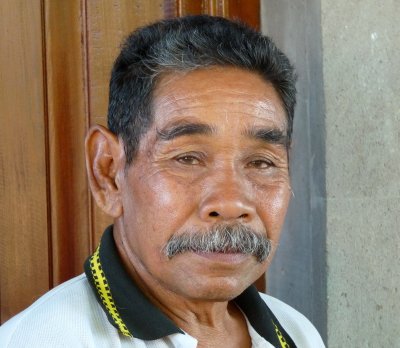 Unbeknownst to us, we happened to arrive the afternoon before Nyepi, Balinese New Year. This is a very holy day in Bali, and no one is allowed to roam the streets, travel, etc. However Nyepi is preceded by a big parade, especially in Ubud, of wicked spirits. 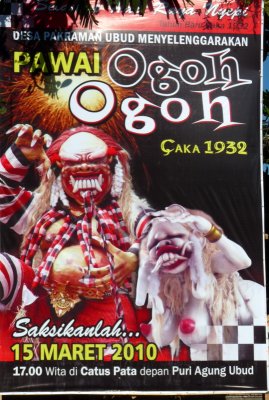 Ogoh Ogoh, as the spirits are called, must be cleansed from the earth before the New Year begins. What happens is that elaborate paper mache figures, 20-40 feet tall, are paraded about to the accompaniment of gongs and drums, and then burned at sunset. Many are somewhat androgynous, often with huge breasts and penis' They are made anew each year in a time consuming process by the men of the village.

How serendipitous to arrive just as this parade was about to take place. 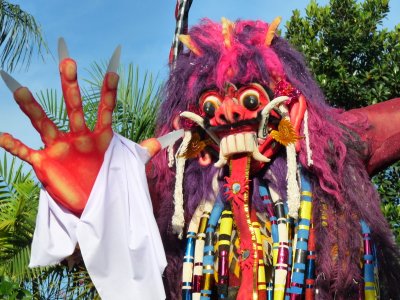 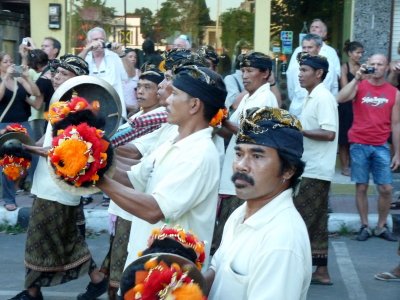 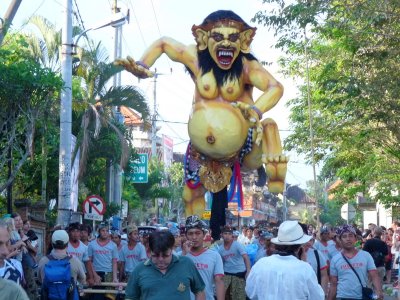 After several hours the figures are brought to a field in the center of town where beer and food is consumed, speeches are made, and the images burned. 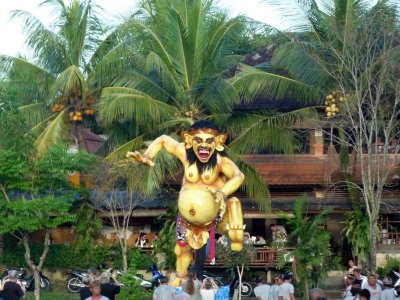 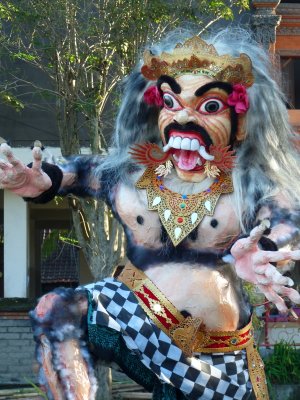 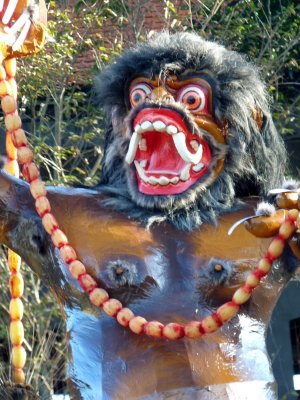 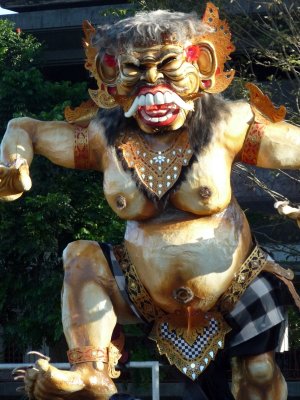 The next day, Nyepi proper, we were more or less cloistered within the walls of the compound. It seems that Raka was personally held responsible for our behavior, and would have been fined had we gone out on the streets. We spent our time reading, swimming, and chatting with the other guests, including a young American couple who had been teaching for two years in Korea, as well as another two American guys, both single, in their 50's. They had each been coming to Ubud for the winter for several years. In the summer Tom was a boat and tour guide on the inside passage of Alaska, based in Juneau, and wrote children's books. Chris was a contractor. They were very much interested in women, but not marriage, though Chris was in long distance and relatively long term relationship. During Nyepi, they had arranged a feast which was catered by a local French restaurant, in a nearby guest house. This was just down the alley from us which was why it wasn't a problem for them to "sneak" out. Chances are the Nyepi "police" wouldn't notice. The rest of us had to make due with considerably simpler fare supplied gratis by Raka. All in all, it was a relaxing day after the rigors of travel and parade watching the day before.

Still suffering from intermittent stomach problems, we returned to Rangoon, hotter than ever, to a coterie of relatives that wanted to see us before we left the country. Based on recommendations from other travelers, we stayed at Motherland 2, an inexpensive backpacker hotel. This was a mistake. We were tortured for most of the night by a leaky aircon, and I don't mean a little. There were big pools of water all over the floor in the morning. The constant drip kept us awake, but when I finally did fall asleep in an Ambien induced half slumber, I dreamt that my bed was submerged and I was drowning. I was sure that our spy, Dr. Myint, had struck again. First it was the POISON FISH, and now BURMESE WATER TORTURE.

Having survived the night, barely, we were met in the late morning by a different niece of one of our U.S. students, since Sue Wei Wei had given birth during our absence. She was accompanied by the young, half Chinese friend, Aung Ko, who we had met earlier, and who continued to act as translator. 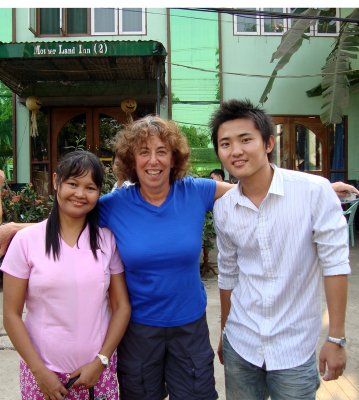 We suggested going to movies as a way to get out of the heat. Sherlock Homes was playing and we asked if there were English subtitles.

"No, No English subtitles because the movie is in English," Aung Ko said.

When we got to the nearly empty theater, it was cold inside, not unlike the bus ride to Mandalay. As it turned out, there were no Burmese subtitles either.

We asked how anyone local could understand it.

"Oh, they get some of it. The movies are almost always in English."

How or why the Burmese would want to go to a movie without subtitles in their own language is hard to understand. It was an experience to see a Hollywood production, with British English accents, in a place where no one would know what the characters were saying, or for that matter, even know about Sherlock Homes.

The next day, our last in Burma, Yu Yu's mother came to see us again, and brought us to her house where there were still more relatives waiting. This house had been in the family for many years. Of course they fed us more ice-cream than we could possible eat. It is expensive here, and they rarely eat it for that reason. 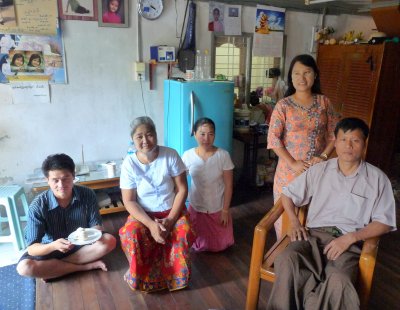 We were an anomaly in this neighborhood and people openly stared. 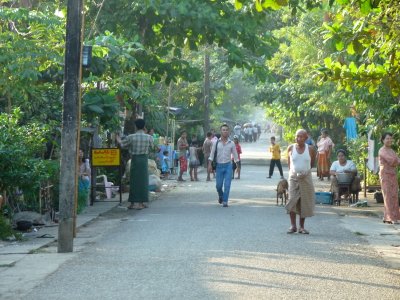 There were street vendors, kite makers, and bicycle tuk tuk drivers with flowers and transistor radios. 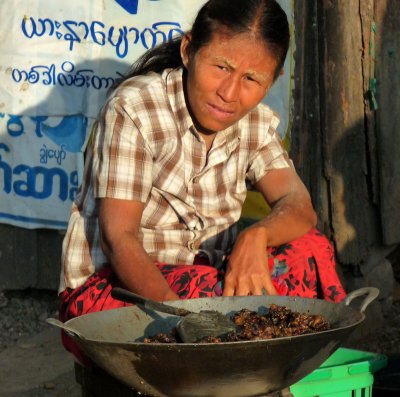 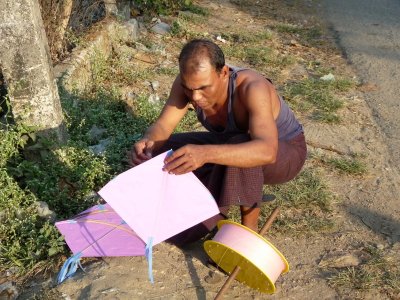 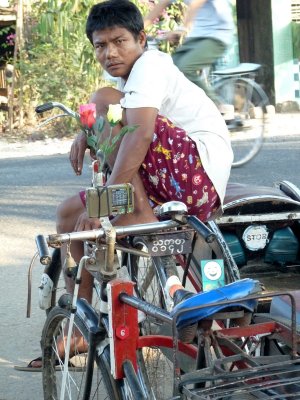 It was a fitting end to our visit. We left for Bangkok, and after two days and some indecision, for Bali and Indonesia. Stayed tuned for posts from that country and Laos.

As a post-script, we recently got yet another bizarre and somewhat indecipherable email from Dr. Win Myint, who we have been told by Nanda, is not a spy. We still have our doubts. Nanda is the Sayadaw in the Burmese monastery in Bangkok. He is now visiting the States after having received a tourist visa with our sponsorship. Unfortunately Ni Ley, the monk who showed us around Mandalay[i], was denied a visa. We are heart broken about this, as he so much wants to leave the country, and we were hoping to help him do so. We are not giving up. Unfortunately for the Burmese and the other ethnic groups in this country, the military government obviously does not give a damn about them. Right now at least, there is little they can do about it, and I fear that by the time they can, there will be nothing left.