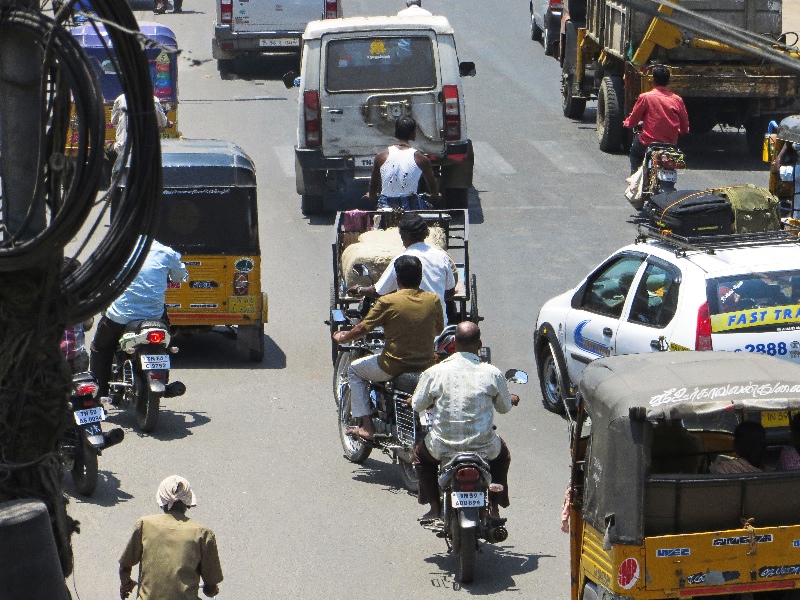 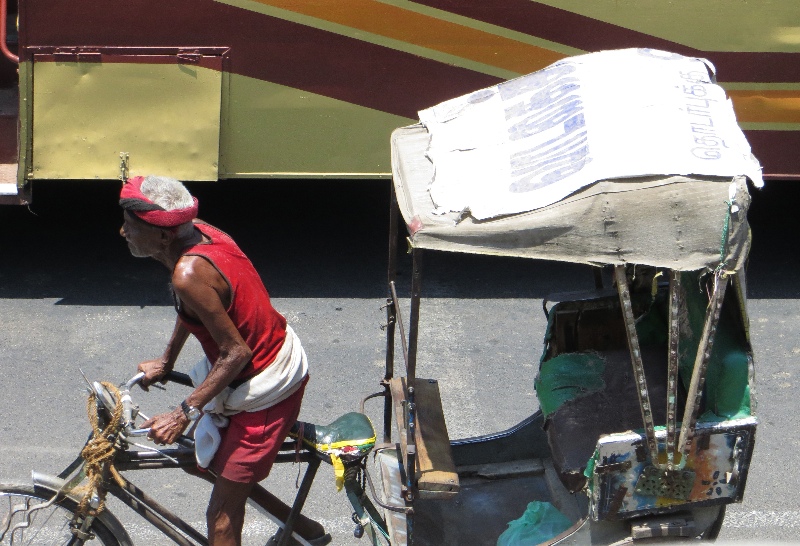 Our hotel, JC Residency, is a bit of an oasis. Cool, clean, nice room, and nice pool, though also in typical Indian fashion, no place to lounge around in the shade. The only staff person who seemed to know what he was doing was Sam, so we asked for him as often as possible when we needed information about the town.

The Menakshee temple did not disappoint. It is a huge complex,dedicated to Parvati (Menakshee by another name) and Shiva, her consort. Reports about it age vary widely, from the 6th through the 15th century, although at some point it was destroyed by the ruling Muslims and then rebuilt. It has 12 large towers, gopurams, full of Hindu Gods standing on top of each other, painted in bright colors, with an assortment of demons as well. Each tower is different from the next, and the overcrowding of figures is very much like the rest of this crowded and sometimes overwhelming country. Luckily, we got there in the morning when it was relatively cool and uncrowded. 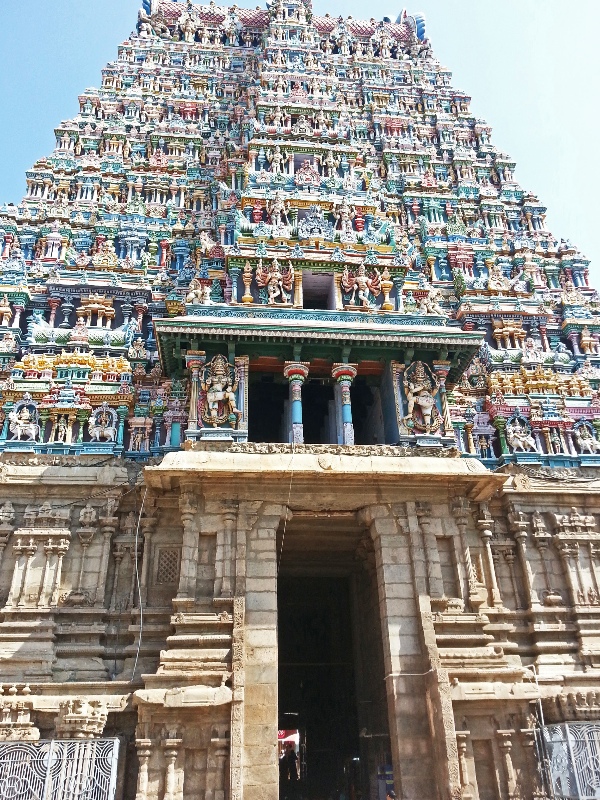 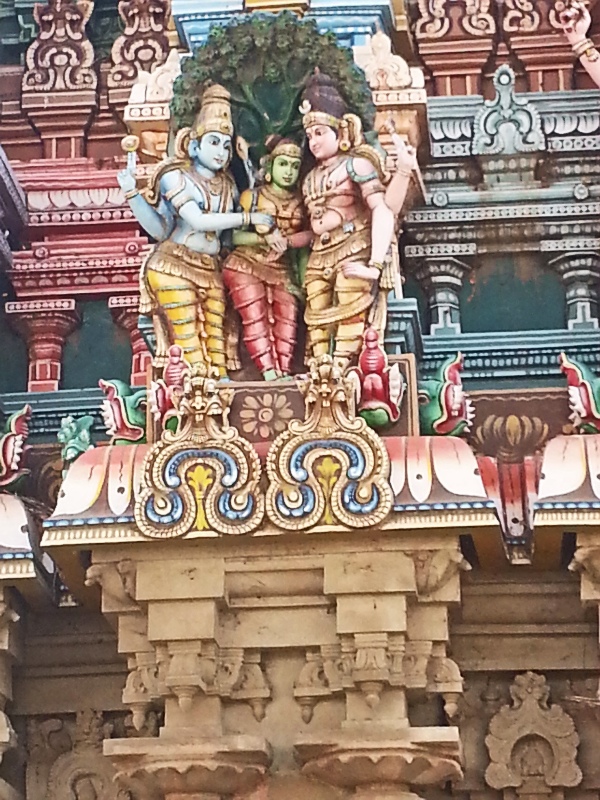 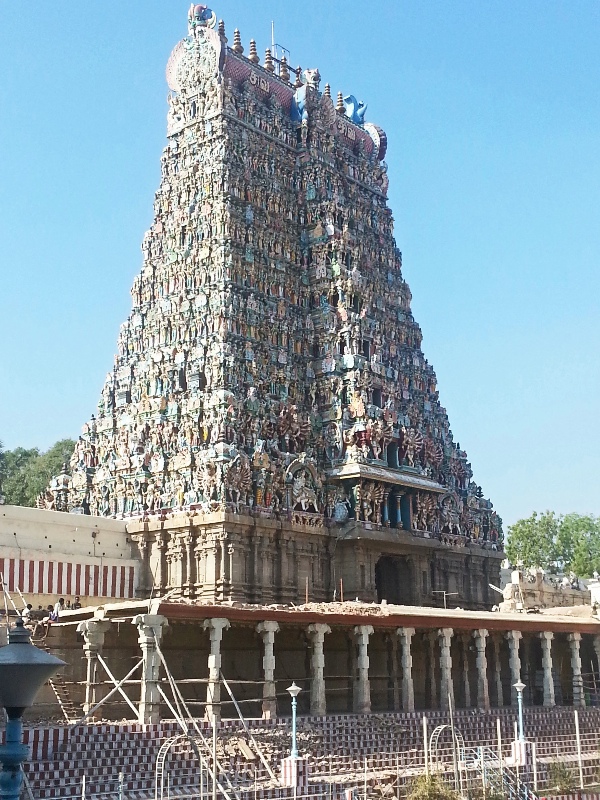 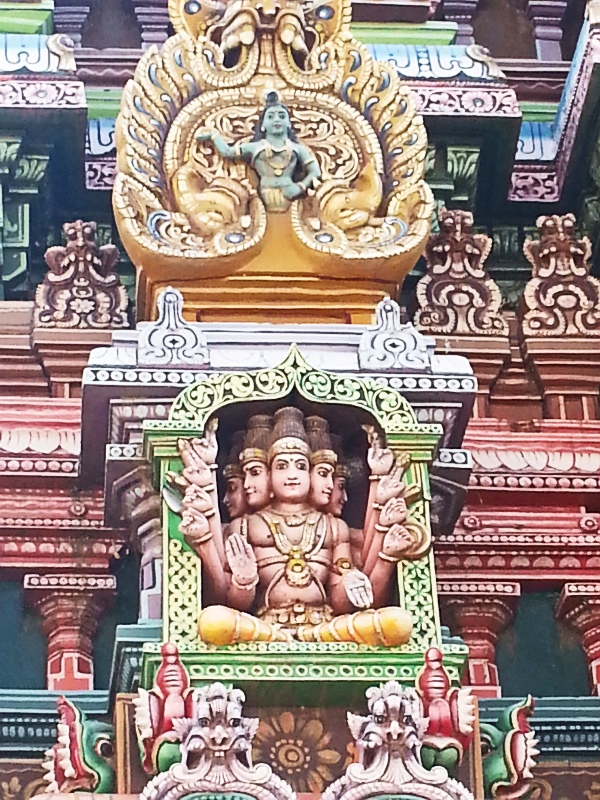 They did not however, let us bring our camera, though we could use our cell phone to take pics. Something about security. We were also not allowed, as non Hindus, to go into the inner sanctums.

We did manage to get in here 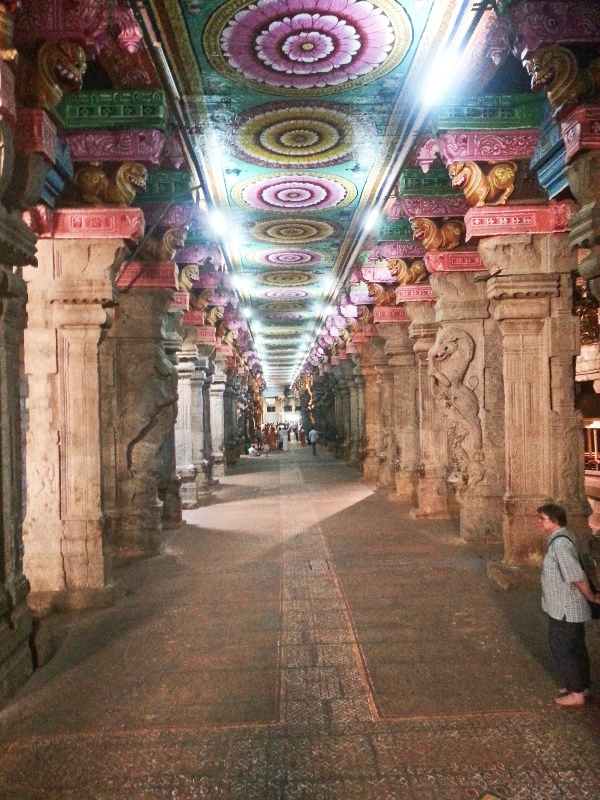 All in all, we spent about two hours, listening to the recorded chanting, and gazing up at the towers. Pigeons flew around the gopurams in widening circles, perched on the various Gods and demons, and of course, shitting on them. There were also many lingams, yakshis, yoginis, and other statues scattered about, and in the on site museum.

Indian women gazing up at Temple 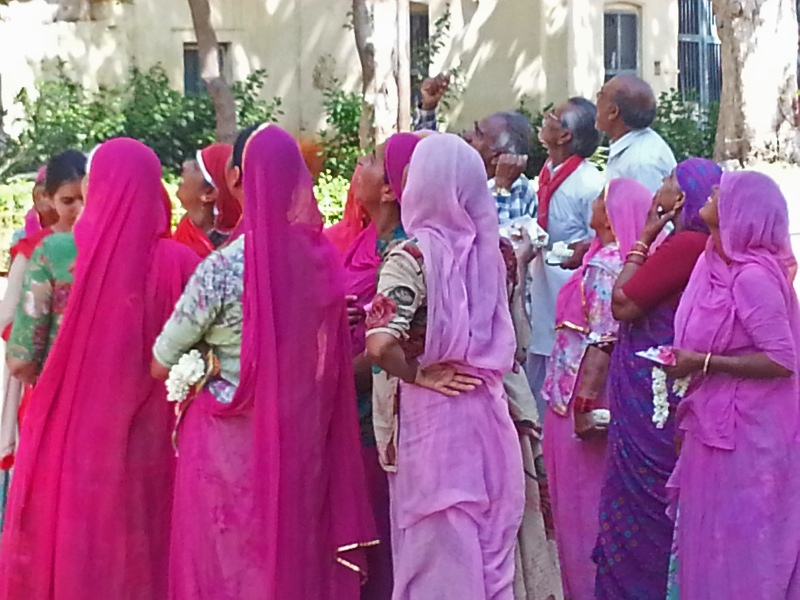 We returned to spend most of the rest of the day lazing about the pool. Just too hot to do anything else. The following day we went to see the Gandhi museum, which was somewhat interesting and the palace, which was not. In the afternoon we were back at the pool where Nanette started chatting with an Indian- American family now living in Madison, Wisconsin. Interestingly, Josephine's husband, was a surgical resident, as is our daughter, and made the switch to interventional radiology. She was visiting her mother Rosalyn, with her very cute 3 year old, Annabelle. They have English names because they are Christians, which seems to be the trend here, as they were originally named by the Portuguese when they were converted hundreds of years ago. Now that I reflect on it, they should all have Portuguese names.

It wasn't long before Rosalyn invited us over for dinner the next night, and we promptly said yes.

It was a long tuk-tuk ride to their modest house on the other side of town. 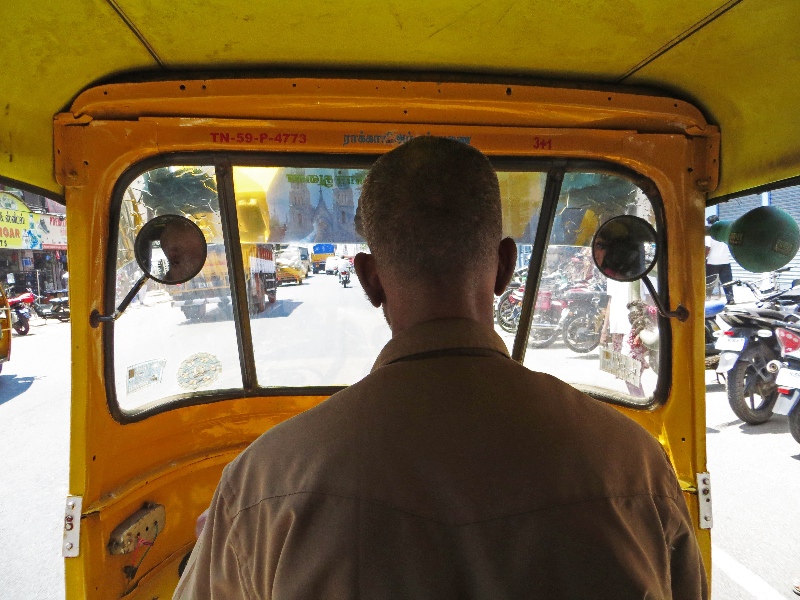 Stanley, her husband, was there, as well as their youngest son, who is almost finished with his accounting degree. Two other sons, one of which is married to Josephine, are still in the states. Both Stanley and his wife lived in Chicago for a while, but decided they liked the lifestyle in India, and so returned several years ago. Now they are both retired. They made a number of local dishes for us including avial, dosas,chappattis, chicken curry, appum, and several others whose names I can't remember, and although there was one servant helping in the kitchen, Rosalyn, it seemed, did most of the cooking. We ate at a small table, with Stanley, while the women, as well as younger brother served us, much like in the Burmese families in the US, who we tutor in English. Over dinner, we chatted with them about their lives in India as well as the US. Josephine's marriage was arranged, and she really didn't get to meet her husband until shortly before moving to the US. He was accepted into a residency program in Madison after finishing medical school in India. She was 24 at the time. Right now, she appears to enjoy life in the states, especially Madison, although her husband is just about finished, and they will move to Bethlehem, Pennsylvania this summer, because he has a job there. Prior to her marriage, she had trained as a dentist in India, but has not practiced in the US. Annabelle takes up most of her time, although she did work as a dental technician for a few years in Madison. Everyone was very gracious towards us and it was a highly pleasurable way to end our time in Madurai.

We are in another isolated place high in the Western Ghats, much greener, cooler, and more rugged than Wayanad. It is surrounded by tea plantations, cardamom fields and rocky peaks. 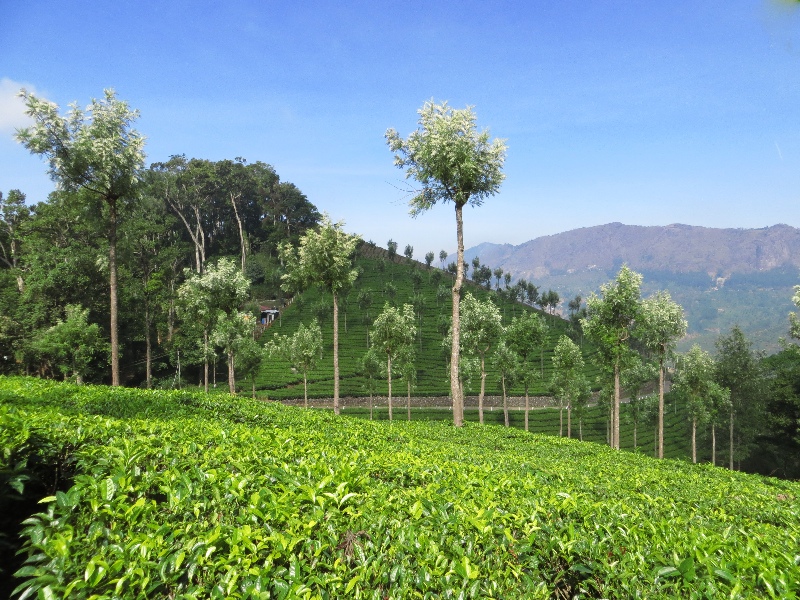 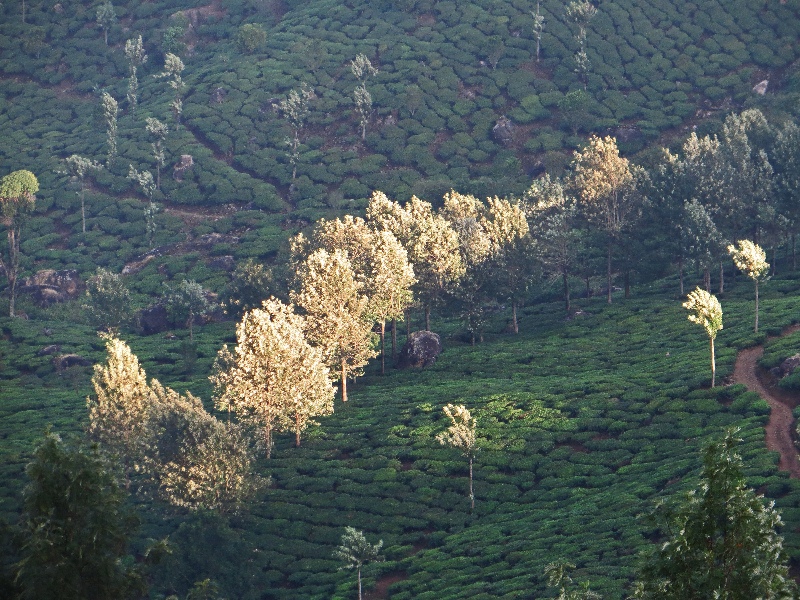 The place we are staying in is a two story house, and we have the upstairs honeymoon suite, my nomenclature, with two rooms and a balcony, overlooking a spectacular mountain valley. Unfortunately, Regi, who I have been communicating with for several months, does not actually stay here, and the only folks that do, the caretaker and a Tamil woman with a baby, have very little English. So when I wanted stronger coffee this morning, I made a muscle with my right arm. Hard to tell whether that made any difference. 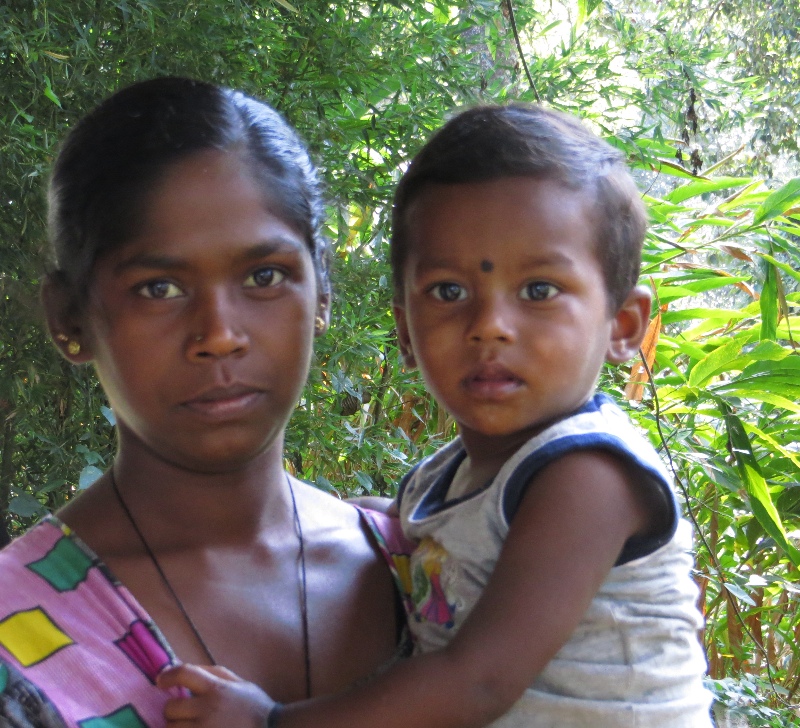 Food has been a problem, as they ordered veggies and rice for us from a restaurant several klicks up the road, and it was greasy and gave us both indigestion. Breakfast of idly was marginally better, as it was homemade, but they are clearly not set up to serve meals, despite what I had been told earlier. 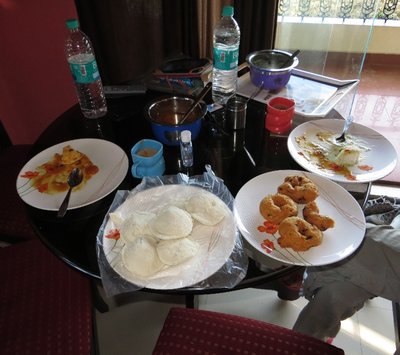 We feel a bit marooned, and I suspect that there have been few, if any, Westerners staying here, especially without a car, as we are about 12K from Munnar, on a narrow, winding road.

Earlier today, we went on a hike with a guide. We thought we would be climbing one of the nearby mountains, but got a late start,and he seemed reluctant to take us up the highest peak because there are "wild elephants up there." It seems that if the Naxalites are not hiding out on the peaks, then the elephants will get you. We spent most of the time in a nearby forest, and in and out of tea plantations. 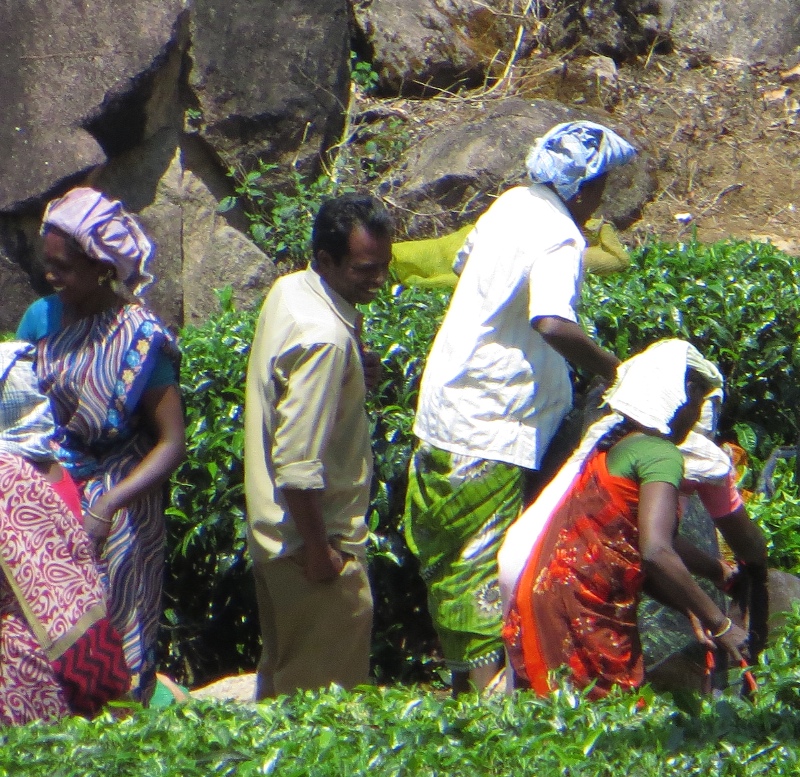 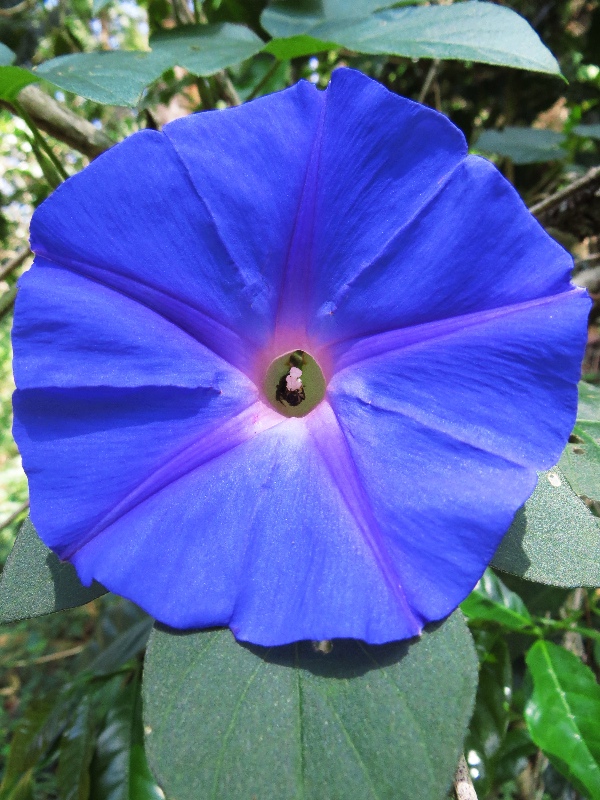 On another day, he agreed to take us up on the ridge line of a lower mountain, and I hope to be over my nasty head cold by then.

We also took a tuk-tuk into Munnar, and ate lunch at a thali place that received good reviews. Unfortunately, neither the town, nor the restaurant are worth writing about.

Despite the isolation at Regi's place, and the rock hard bed, which reminds us of China, the sunsets are as brilliant as I have seen anywhere, as is the view from our balcony. We have enjoyed sitting out there, drinking a beer, listening to world music on my travel speaker, and just gazing out at the last light of day. The sun goes below the clouds as the sky turns pink, and then the mist descends, so that it is hard to tell mountain from sky. Subtle shades of grey and orange dominate, as the outline of the ridge line above merges with the darkening sky as dusk turns to night. 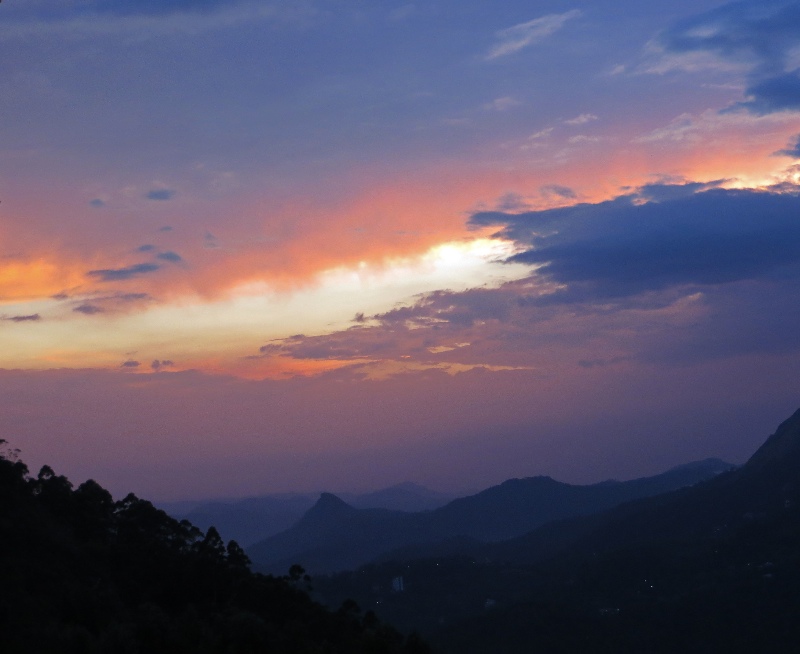 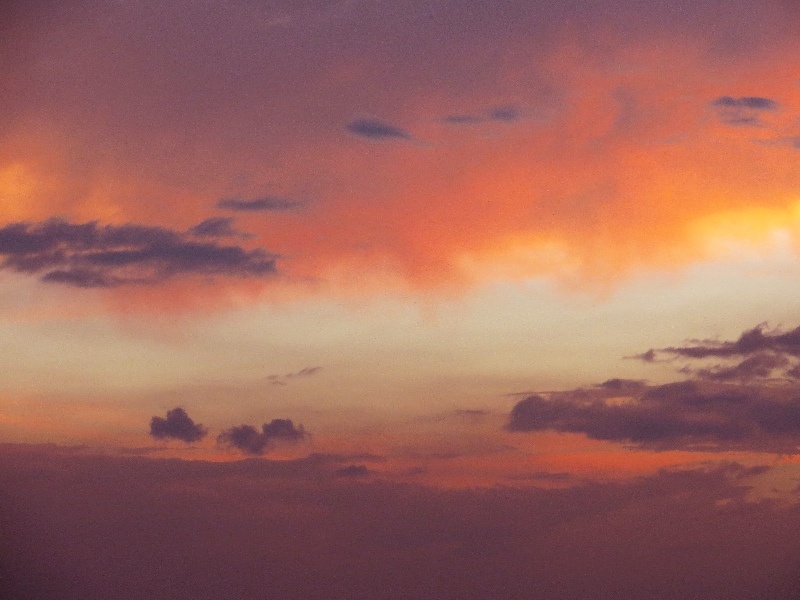 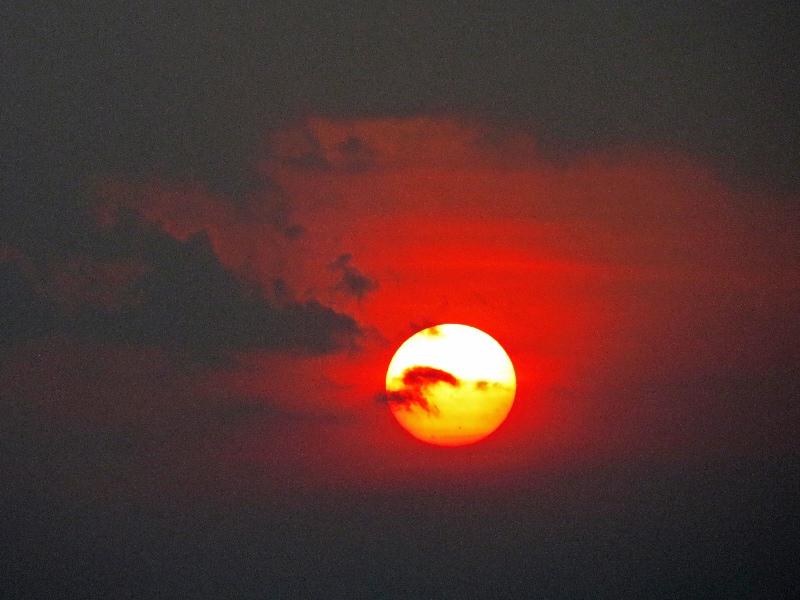