Picture postcard cute, Trinidad is an almost fully intact colonial city of about 30,000. It feels a bit like San Cristobal de Las Casas in Mexico, with hills and cobblestone streets. Of course, that was close to 40 years ago. Plaza Mayor has been almost fully restored, and is the center of tourism in town, of which there are plenty. In seems almost everyone who comes to Cuba stops here, mostly Brits, French, Italians, Spaniards, and a smattering of Canadians. The are also plenty of Jinteros, touts, who seem more aggressive than elsewhere in Cuba. People are still friendly, but they are clearly a bit jaded with all the tourists around, and are quick to overcharge for agua and comida, especially around the plaza. 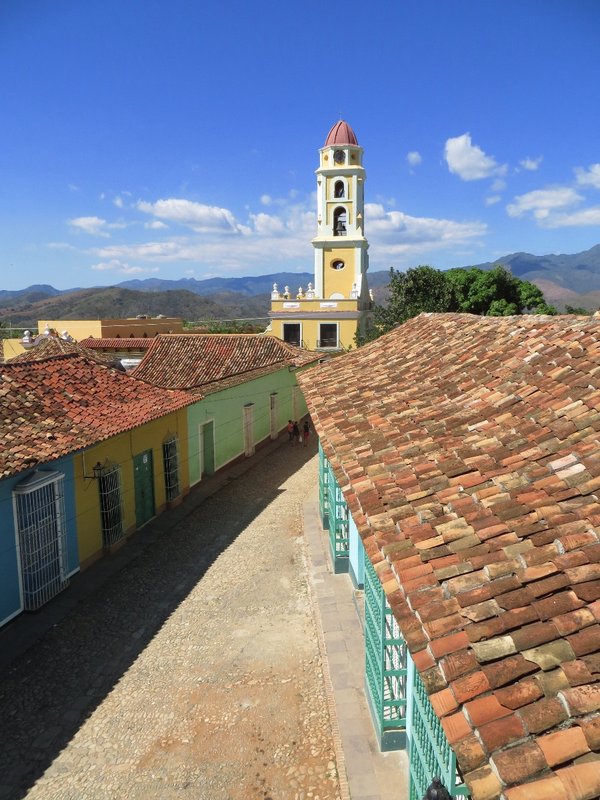 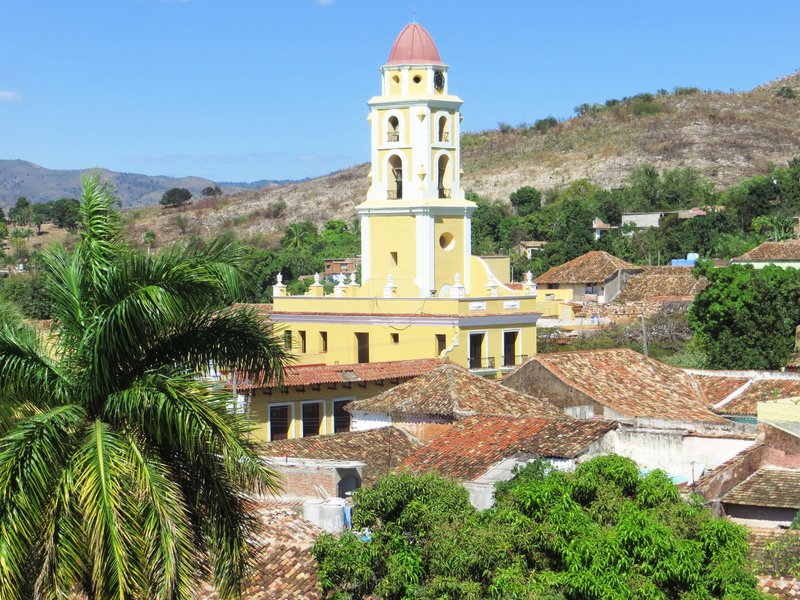 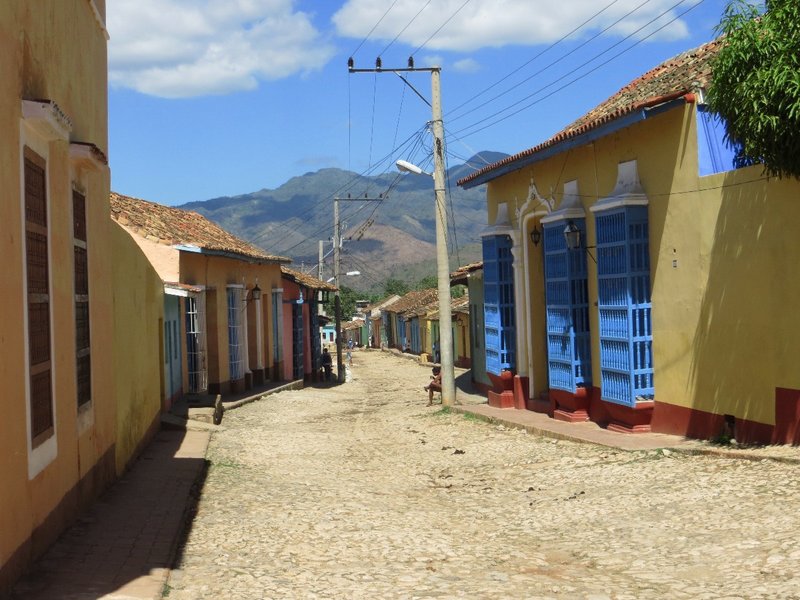 Step away from the center of town however, and life proceeds in typical Cuban fashion, with buildings in need of major repair, horse carts and bicycles, tiny tiendas and mercados, etc. 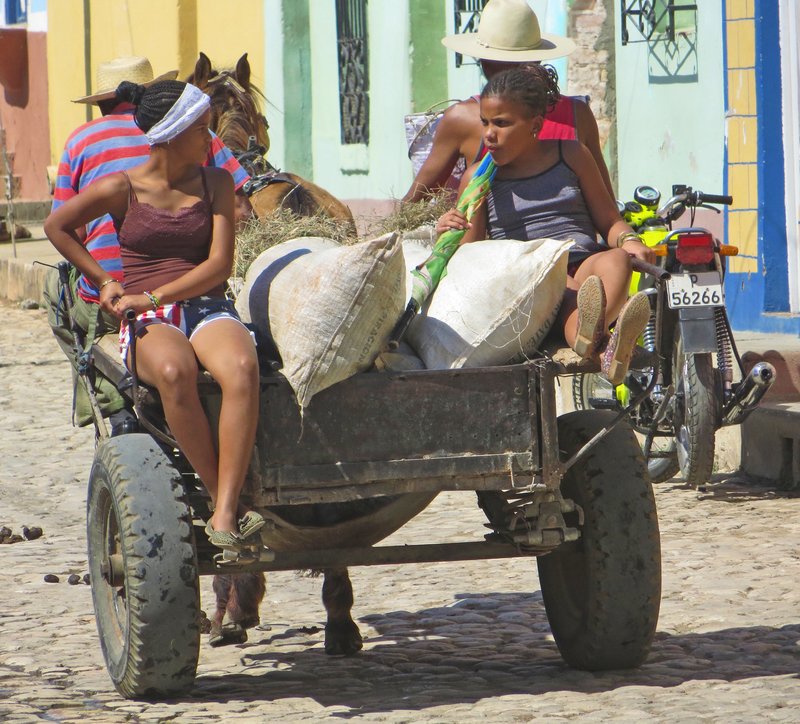 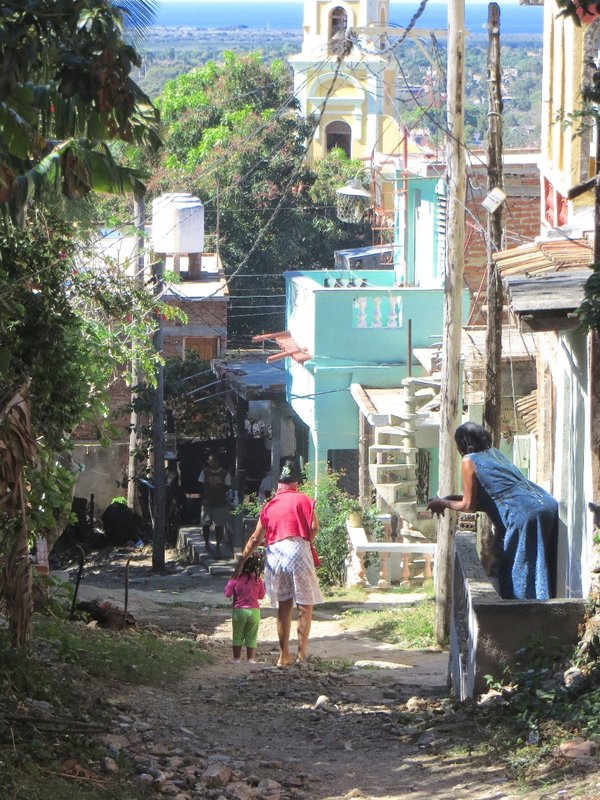 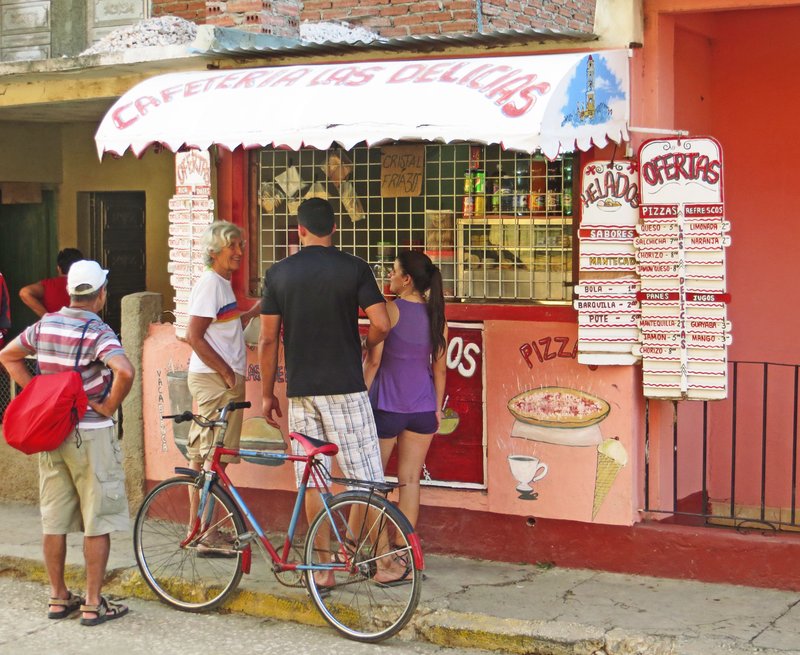 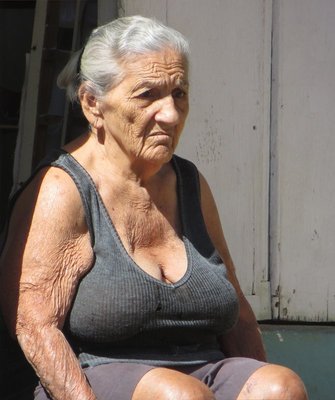 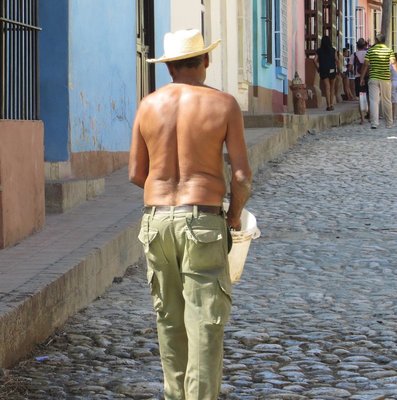 We have spent the last few days wandering around, sometimes with our friend Terry, and sometimes not. We have eaten a couple of tasty meals here at our Casa, and then last night, based on the advice of our casa's dueno, we found Restaurante San Jose. Excellent Cuban food at reasonable prices. We had to wait, but it was worth it.

One of the oldest churches in town, now just a shell 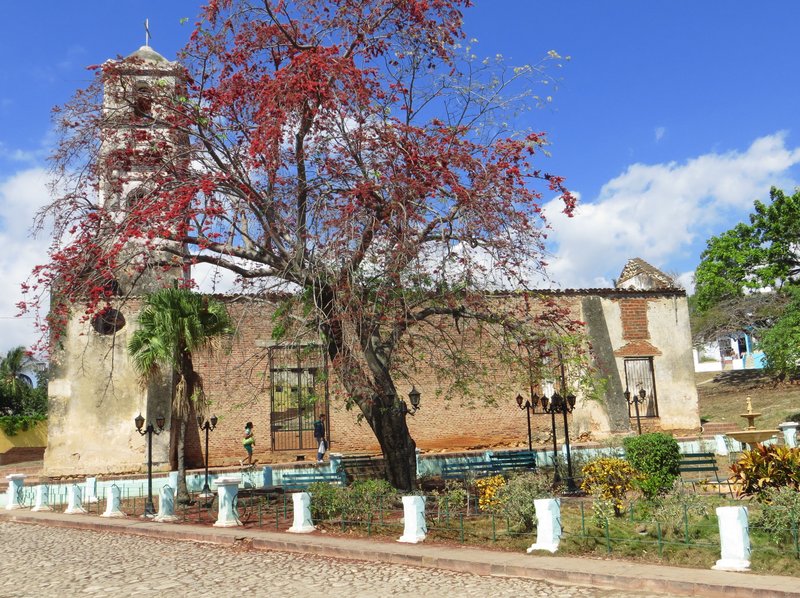 On one of the days we took a short hike up one of the colima's (hills) on the edge of town. We walked up to the cell tower/radio station, and got into a lengthy chat with the caretaker. He took us to the roof of one of the buildings for a panoramic view of the city, sea on one side, mountains on the other. As a largely self-educated black man, he confirmed the presence of racismo here, and was not sure that even if the embargo is lifted entirely, that the common people would benefit. Of course, the hombres de negocios, businessmen, will profit, he said, but probably not guys like him. He had similar complaints about the government as most of the folks we have talked to, but again, it was even handed. He told us about the free medical care, education, food allotments, etc. that the government provides. We spoke with him for quite some time, and he let us know that most Cubans are very interested in reading, and line up for books at the library or when there are book fairs. Although a compesino, he was very well informed about what goes on in the world, more than you can say about his counterparts in the United States.

Yesterday we took the 2 CUC tourist bus out to the Ancon beach. Said to be the best beach on the Caribbean side of the island, it was nice, though not perfect for swimming because of the seagrass which started close to shore.But no matter, as it was too cold to swim, at least for us. There were several large and expensive hotels nearby, but we spent an enjoyable day lying on lounge chairs, in the shade of umbrellas made from palm leaves. 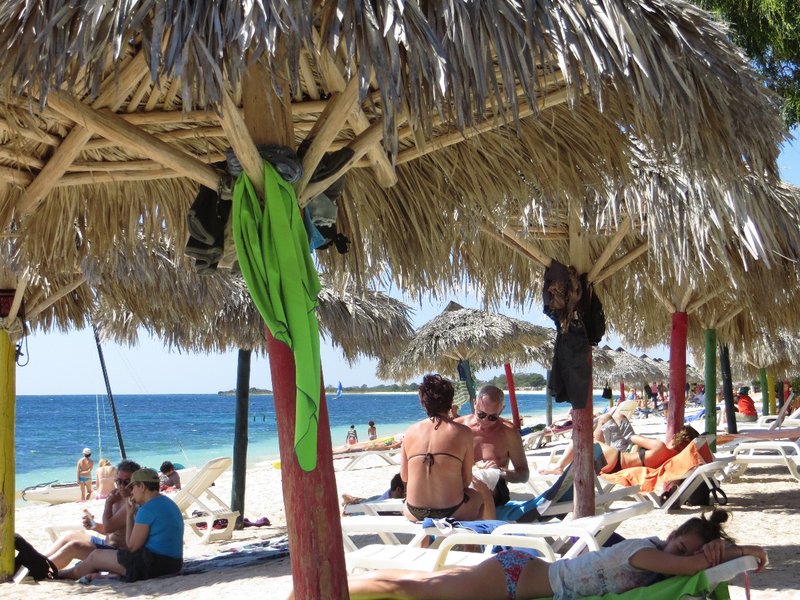 After dinner, in my endless quest for rumba, we wandered up to Casa La Musica, which is an outdoor venue just off the plaza. not a casa at all, Although not strictly speaking rumba, which has been variously defined, it was a hopping place with a very good band, that had several congas and timbales, trumpet, singer, electric base and piano etc. We met a young Belgium couple there, intentionally, as we had run into them earlier in the day at the beach, and who we had previously met at Zunilda y Raya's place in Cienfuegos. It wasn't long before Nicholas and I were buying each other mojitos, with his girlfriend Caroline keeping up without any problem. Actually, they had a few rounds before we got there.

There were some incredible dancers in the crowd, almost all Cuban, who were moving in perfect sync to the music. It inspired me to consider taking lessons once again when we return to New York. It seems that Cubans know intuitively how to swivel their hips, and it is easy to believe, as the book I just finished reading about cuban music suggested, that Elvis had seen a Latin movie in the States, and copied his moves from the movie. There was one old guy there, probably in his 70's, who was dancing expertly with a few women less than half his age, and he had no trouble leading them around, twisting and turning them with his arms, sometimes more than one at a time. A placer para mis ojos. And then there were a couple of white folks, also our age, who knew how to dance to this afro-cuban stuff. Spaniards? Possibly.

After an hour or so, another group came on, all black this time, with even more drummers and singers, along with costumed dancers. They sang in a combination of Spanish and African, and although clearly done for tourists, they were damn good. I felt, really for the first time, that I was getting to hear some of the music that I was hoping for in Cuba, which until now has eluded me. It was a mixed crowd of locals and tourists with a very nice vibe. We stayed two hours before walking home. The music seems to start earlier here than in Habana, which is a good thing for us older folk, though I could have stayed even longer. Tomorrow it's back to Habana for a night before heading to Europe.