It was a beautiful drive through the mountains to get here, over high passes and then down to the Ameln Valley, surrounded by sculptural rocks with high crags behind, including Jebel Kest (2359M, roughly 7800 feet).

Drive Over the Mountain Roads 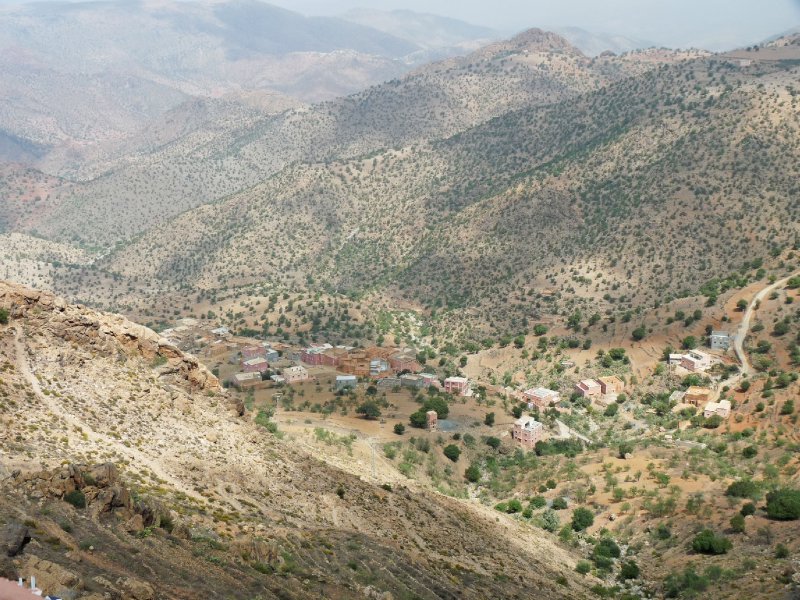 The sun is hot and the air cool, and the place is full of working class French tourists in RV's. They are here in part to avoid paying French taxes, and to avoid the winter. It is a bit strange to see so many of them in a former colony, but they bring badly needed revenue to what would otherwise be a remote and isolated place. Though bigger than it looks at first, Tafaroute lacks the variety of restaurants and patisseries that we found in Sidi Ifni. There appear to be more tourists here, and though it was off season in Sidi, it seems to be prime time in Tafaroute. The town looks and feels like the American southwest, with a wide main street and what looks lot be a vaguely Native American motif on the concrete facade of the buildings. The dryness of the mountains and the landscape complete the picture. 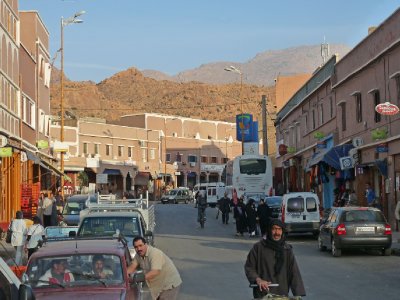 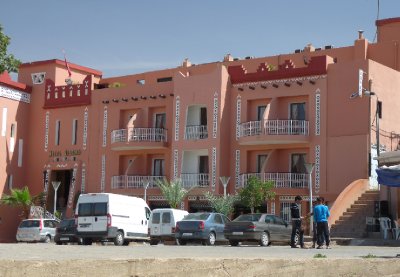 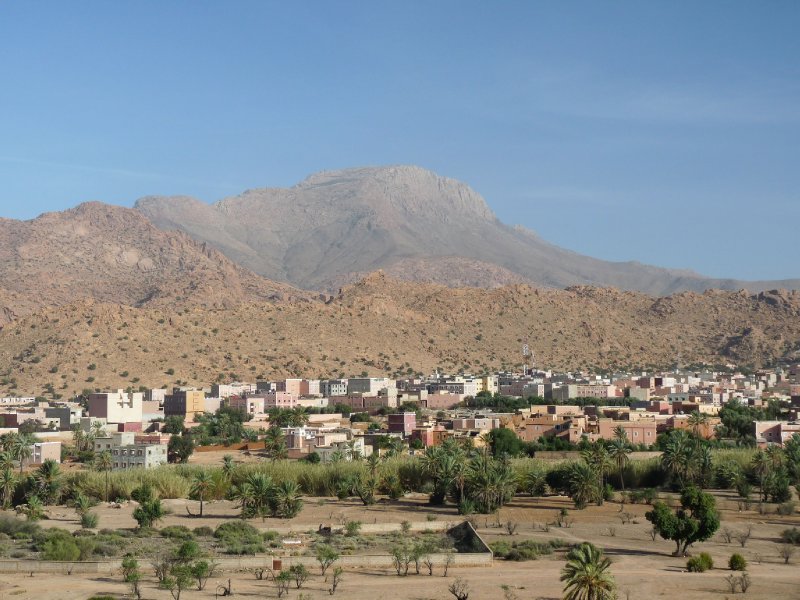 In the afternoon we clamored over some rocks at the edge of town. It looked remarkably like a set of rocks just outside South Lake Tahoe, California, except that is, for the palm trees and the man taking a shit in a nearby stream bed. Unfortunately, there is shit and garbage in various places. When we returned to our hotel, one of the more upscale places just off the main drag, the faint smell of rotting garbage from the dry riverbank below, wafted through the open window of our room. There are also plenty of well kept houses which, together with the stunning blue sky and mountain scenery, provide a stark contrast to the dirtier aspects of the town.

Amazingly, the 4 AM call to prayer did not wake me up, but the snarling dogs fighting for the garbage below did. No matter, today was a lovely day. We rented bikes from a German expat who lives here for six months of the year. We pedaled around some of the villages in the Ameln Valley, off of the main road. A number of houses are clearly old, made of adobe like materials they fit in naturally with the red granite surroundings. Others are newer and larger, but are made of cinderblock and concrete and painted in salmon earth tones with white windows. The bigger and more prosperous ones are brighter reds and orange. 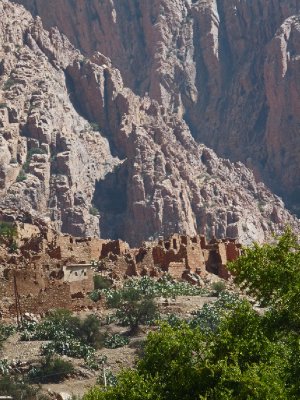 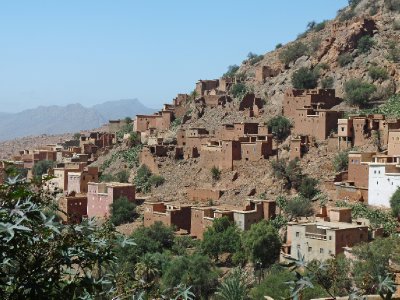 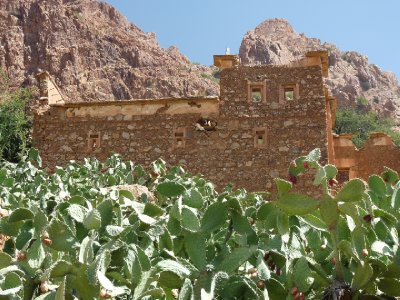 At one point we walked with our bikes up a dirt track overlooking a gorge and ancient villages. A few women waved through the windows of their houses, and then a boy of 8 ort 9 came by and spoke to us either in Arabic or Berber. He was quite communicative with pantomime when it became obvious that we didn't understand a word. Refreshingly, he didn't want money, only to make contact with us, but like so many others here, he didn't want me to take his picture. After a few hours of cycling, we headed back in the now hot afternoon sun. We ate lunch, and then enjoyed a cappuccino and pastry at one of the few patisseries. I guess that is one advantage of being an ex-French colony. The air has a clarity here, as in many mountains towns. The shadows are sharply drawn against the tawny buildings, and there are big temperature variations between sun and shade. Ideally, one sits with body in sun and face and arms in shade. Hard to maintain for long. 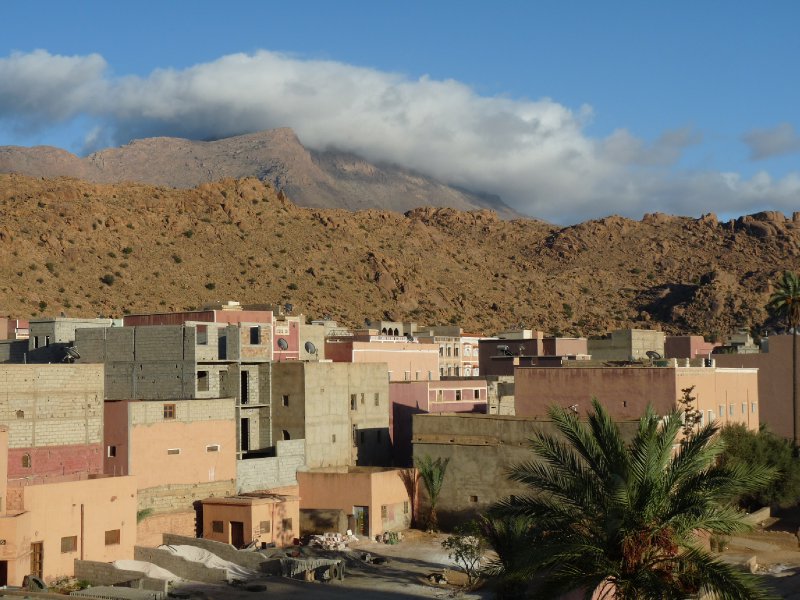 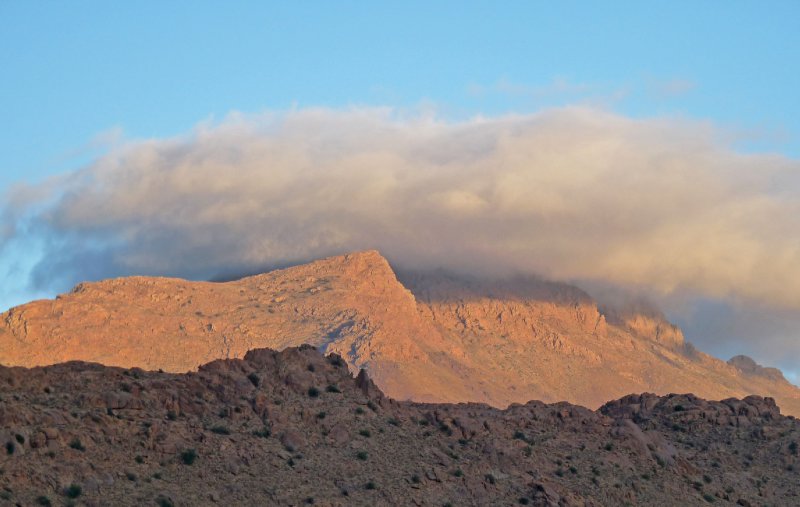 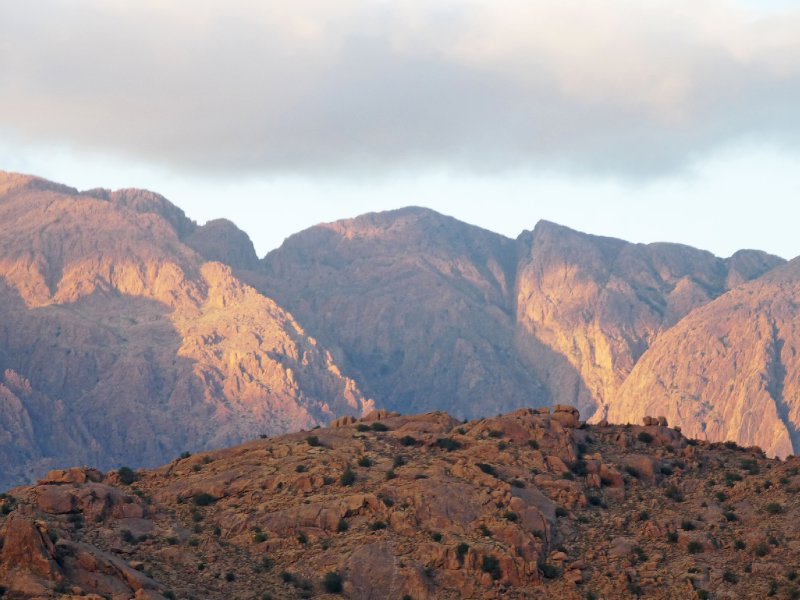 With Abdel's help, we rented a car for a reasonable 250Dh a day and headed off to to Sidi Ifni, an atmospheric town on the Atlantic that belonged to Spain until 1969. The first night we spent at L'Auberge Sable D'or, aka Faulty Towers, on Legzira beach, about 10 miles north. It was a spectacular coast of cliffs, crashing surf and mist, much like California, but we the next day we found a much more comfortable and reasonable place to stay in town. (The Safa Hotel.) 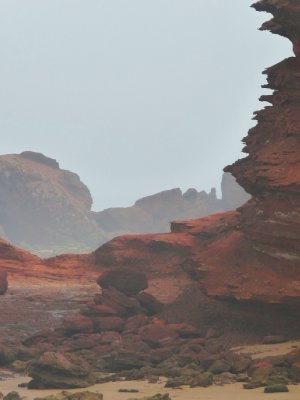 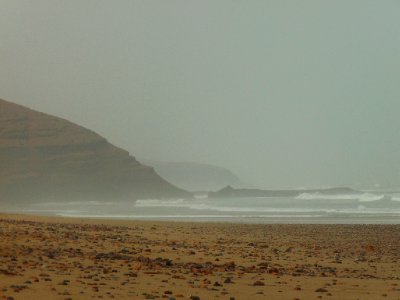 Sidi Infi is a relaxing place, at least off season. No touts or other street vendors hassling you, it is a delight to stroll through the blue and white art deco buildings that comprised the old Spanish town. Our daughter Mia and her boyfriend Dan, on break from residency training, were able to find us at the hotel, and we all relished a cold beer at a bar overlooking the foggy sea. 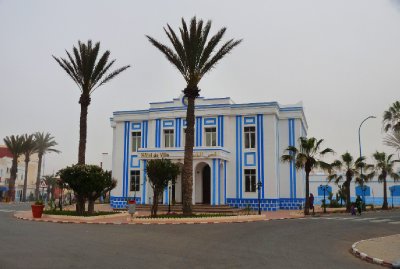 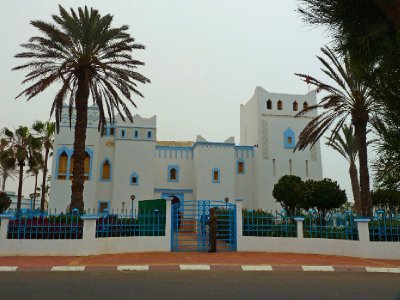 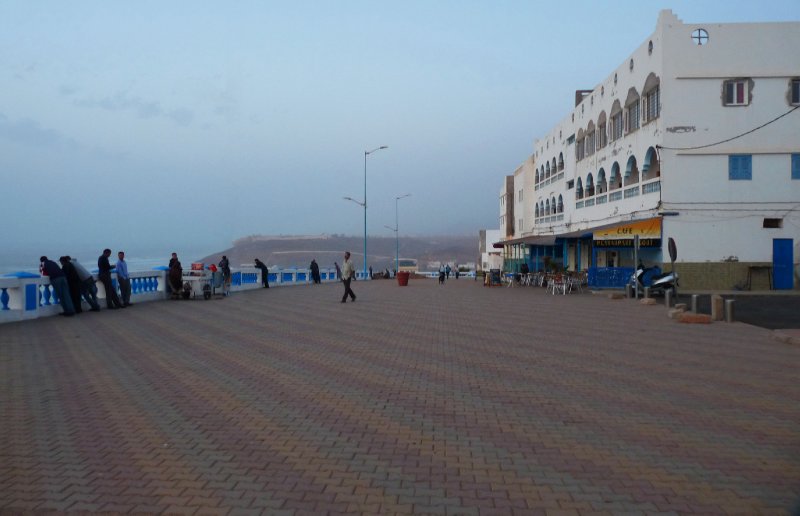 Today we took a long hour ride into the middle of nowhere, to a set of hot springs in the dry and dusty mountains to the East. Men and women had separate pools, relatively clean, and not too hot, which was a good thing since the desert air was toasty, in contrast to the misty cool of Sidi. 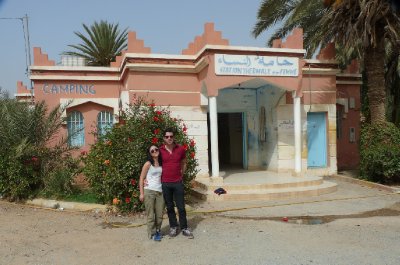 When we returned, we ate a tasty fish tagine at Chez Mustapha, on the main square. 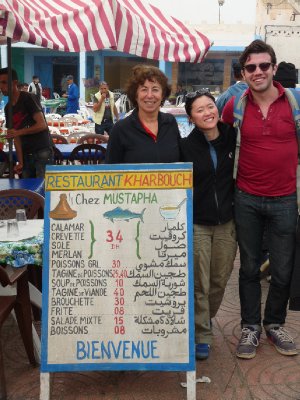 Then we wandered around the large central fish market taking pics of the gaping, though dead, monsters of the sea, large and small. Taking pictures of the locals was more difficult as most were not keen on it, and it was hard to do on the sly. 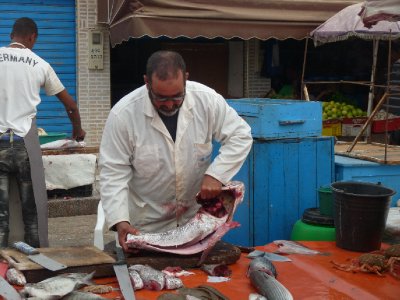 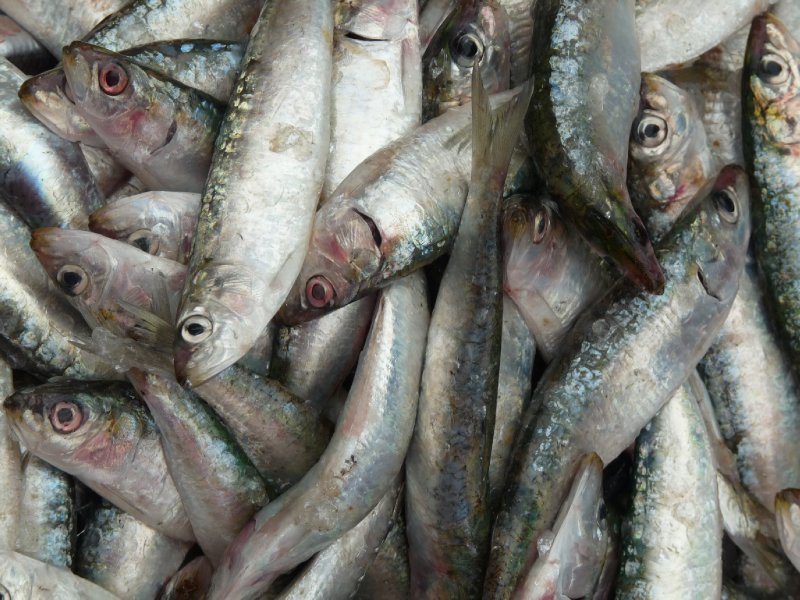 Mia tried on a full length tie dyed sari, which seem to be all the rage here in Sidi, where the fountain outside of our hotel has a hidden speaker that plays Bob Dylan and other 60's music. It required considerable help from the shopkeeper, similarly attired, for Mia to tie it properly, and so of couse we had to buy it for her. She got some strange looks, an Asian looking woman dressed in Muslim digs, accompanied by a white guy, Dan. It was quite a clash of cultures, but then Sidi Infi seems all about that. We were hoping to use our Spanish, but few people still spoke it. 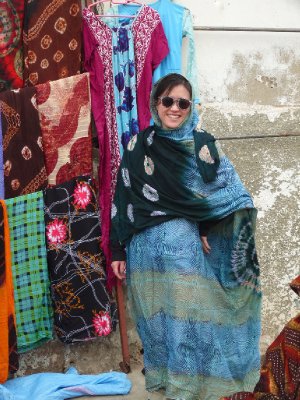 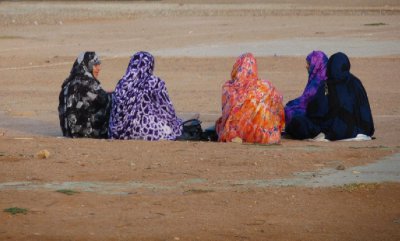 There are a good number of retirees, mostly French, who park their RV's not far from our hotel, near the beach They spend the winter here after taking the ferry over from Spain near Algiceras.

This is a place where one can spend some time. Nothing is really going on, but it is easy and comfortable, without the frantic medina action of the larger cities.

At the cafe with the Bob Dylan fountain, we met a couple of Brits in their 40's, Tina and Rich. They were on the road for a year, mostly in Eastern Europe and Turkey, on leave from their teaching jobs. They rented an apartment behind our hotel for a couple of weeks. We have enjoyed some good conversation with fellow English speakers, and went with them and our children back to Legzira. The sun came out and the wind died down, and we were able to walk through two enormous stone arches, and then lie on the sand soaking up some rays. 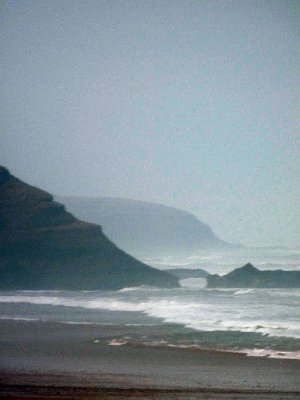 On our return, we couldn't resist another great fish meal at Chez Mustapha. Mia and Dan went off for a walk, and we returned to Tina and Rich's apartment for coffee and Moroccan pastry. It was not quite on a par with Abdel's mother's sweets, but quite tasty nonetheless. We spent the rest of the afternoon Sari shopping in town, and returned to meet Mia and Dan at a seaside bar by their hotel. We polished off a few cold ones, and then drank the bottle of wine Mia had bought for us for our anniversary. It was nice that Sidi was not a dry town, despite the Muslim prohibition on alcohol. Perhaps it was the Spanish influence. Sitting on the outside terrace, we could see the waves rolling in as the sun set. After dark, shadows of grey-white mist rose from the beach, dimly illuminated by nearby street lights. I gazed up at the crescent moon and at an incredibly bright planet, Venus, shining next to it. 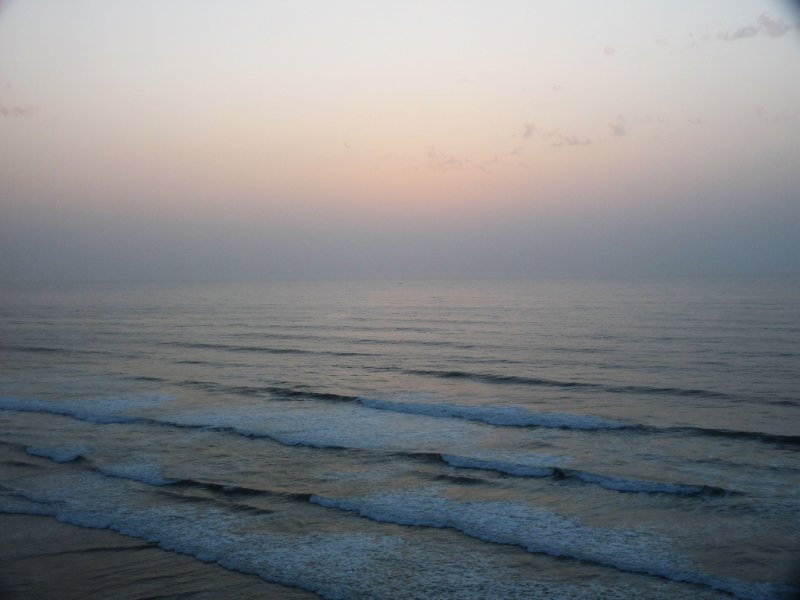 After three days, Sidi Ifni will be hard to leave, but we depart tomorrow for Tafaroute, about a four hour drive through the mountains.

It seems that some of you have had trouble accessing the interview of me that was featured in the Travellerspoint newsletter. For those of you who are members of Travellerspoint you shall receive it automatically in a few days. Otherwise, you have to go to the URL posted below and cut and paste it in your browser. It is not an automatic link. For those of you using Safari, it will not work if you put in any parenthesis. Once you put it up there, click enter and that will work. Sorry for any problems.