On the long and windy road. not far from Tongariro 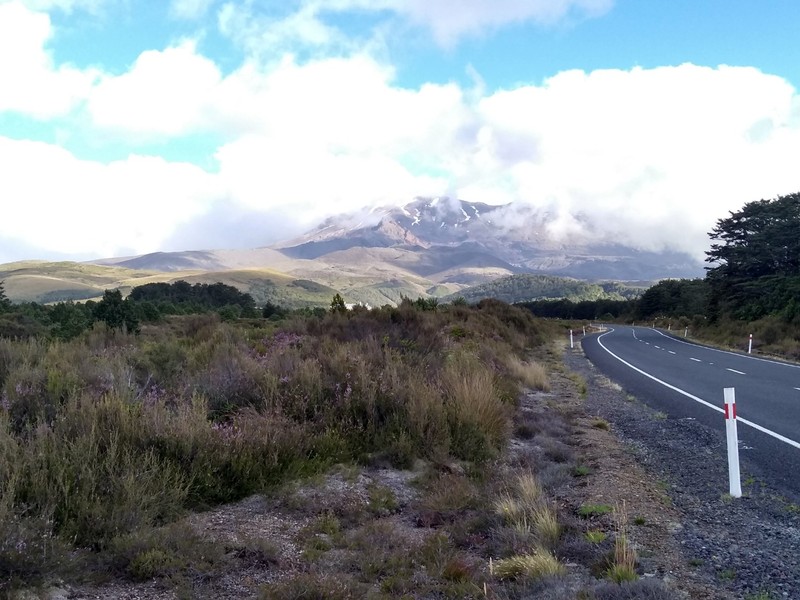 We didn't realize how large a beach resort Tauranga was, but we kept driving along the coast until finally, we got to a deserted stretch of beach.You know how it is to try and find the perfect camping spot away from it all. Or maybe you don't. I will go a long way to find to find the best spot, and luckily Bill was usually game. Of course we went a bit further on just to make sure, but nothing was a nice as the first place we came across. Matata did have a fish store, and not much else, and we managed to snag dinner which we brought back to the van to cook. Other than a couple of fishermen who left after dark, we had the place to ourselves. 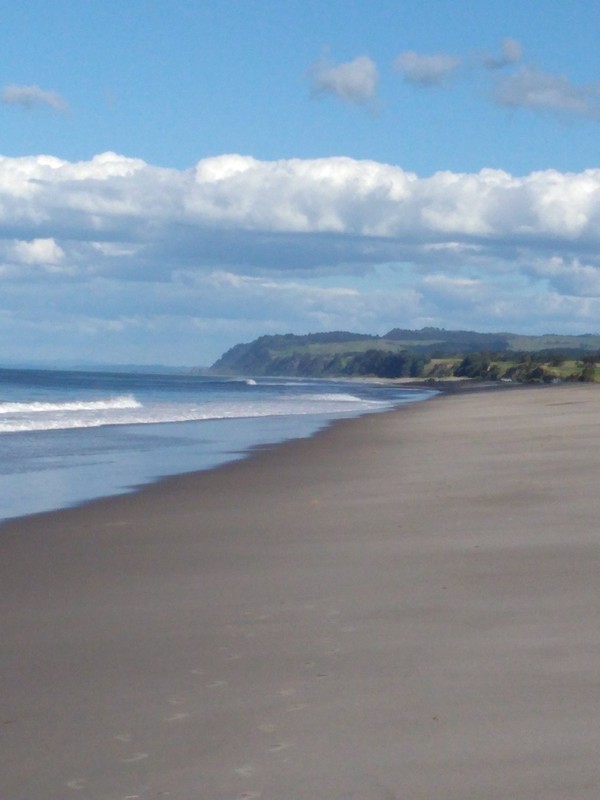 I am strictly a warm water guy myself, but relaxing with a couple of cold one's on the beach and then cooking dinner was delightful. 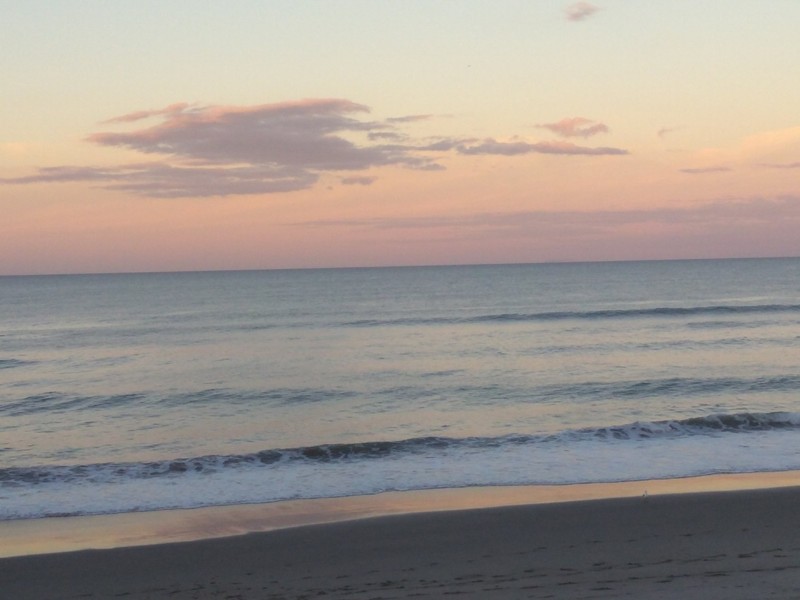 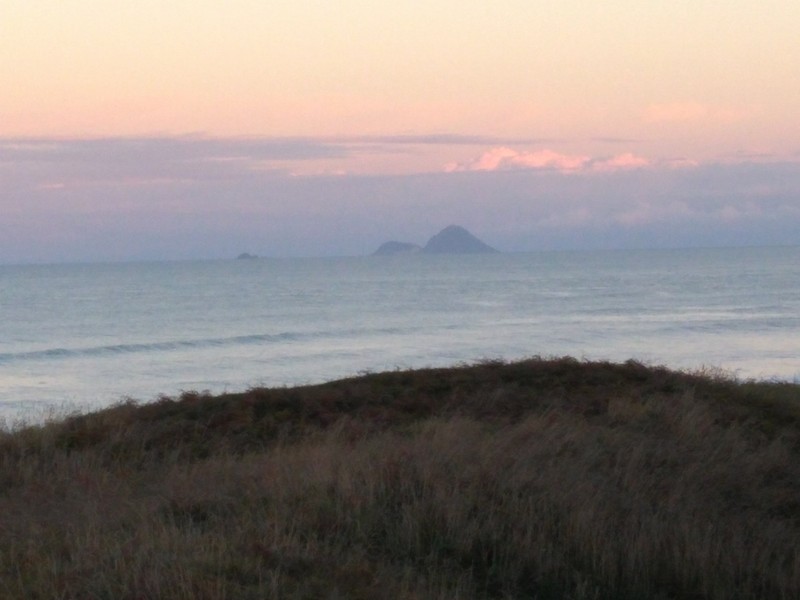 Known as the best one day hike on the North Island, the Tongariro Crossing is probably the most popular hike in all of New Zealand. It's popularity no doubt increased substantially after Lord of the Rings was filmed here several years ago. Not sure we wanted to do the entire 12+ miles up and down several peaks we opted to start at the far end of the hike, and go as far as we liked before turning around. This proved to be an excellent decision as almost everyone else starts at the visitor center and then arranges to be picked up via a shuttle service at the other side. However this did entail getting up at 5 AM to snag one of the very limited parking spots at the far side. The weather decided to cooperate, a very good thing as most of this hike is above tree line. 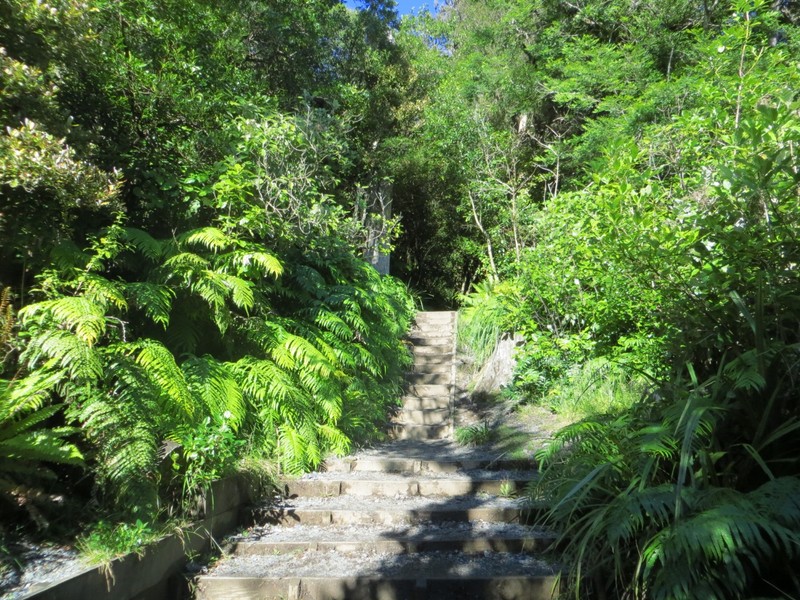 Emerging out of the woods, the first fumaroles were highly visible. 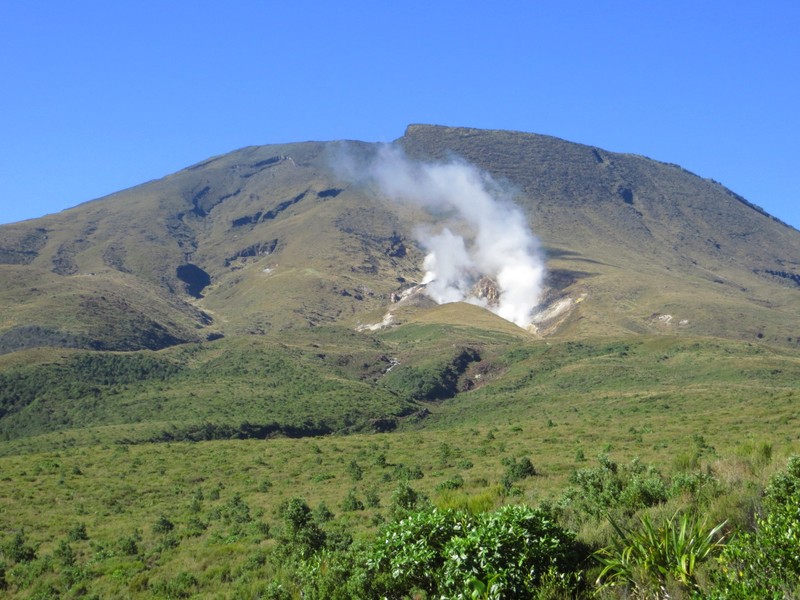 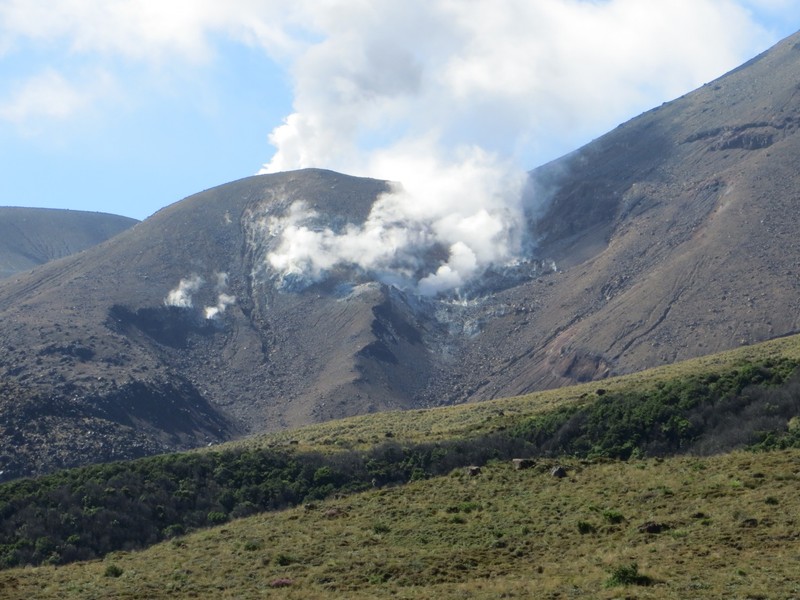 I was hiking faster than Bill and so eventually we got separated, and figured we would meet up on the trail somewhere near the half way point. After a few of hours of hiking seeing very few people, I started noticing more hikers who had started very early from the other side. Just a trickle at first, the numbers increased dramatically until there was almost a continuous stream of humanity. Eventually, I got to a high alpine lake and stopped to a have a bit of lunch.

Although not noticeable in this photo, there were hundred of people sitting on the opposite bank/i] 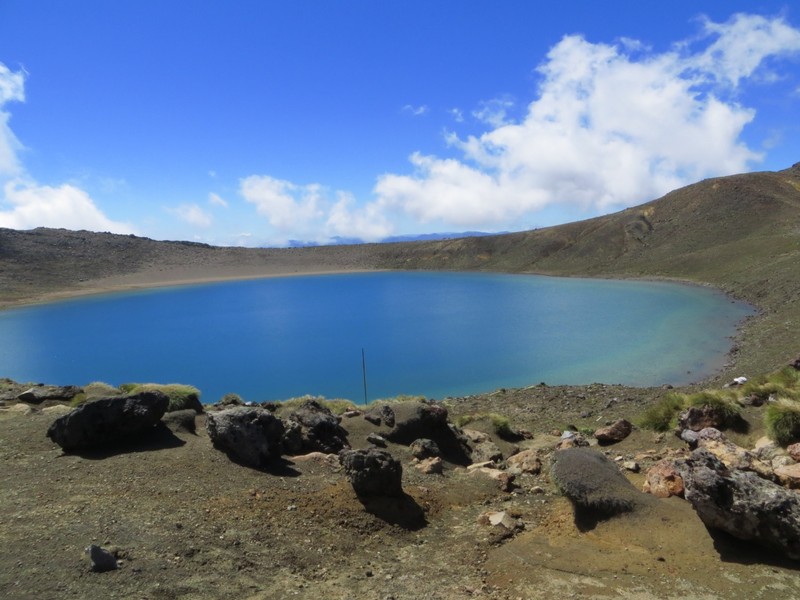 [i]Your's truely, not far from the lake 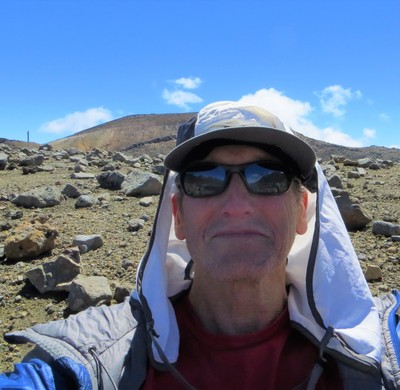 Beyond the lake, a large flat area with Mt. Doom visible in the distance 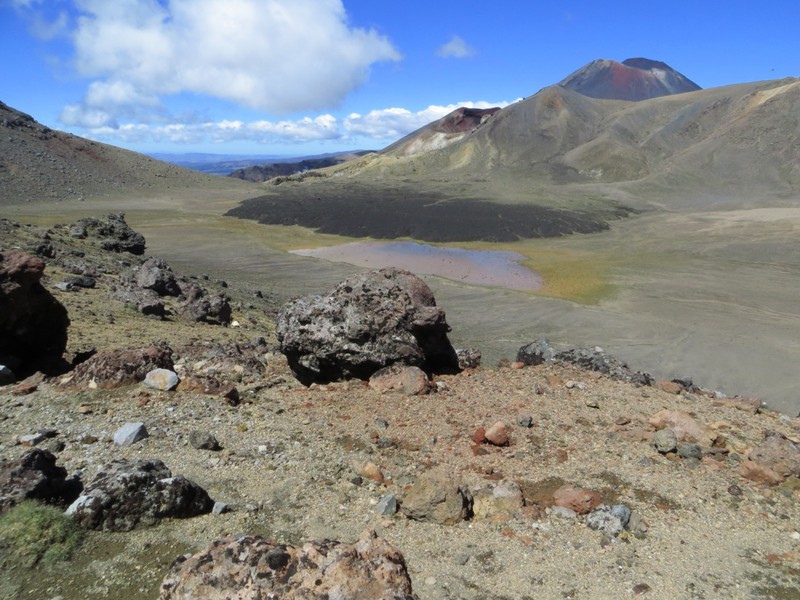 Continuing on, I got closer to Mt. Doom. 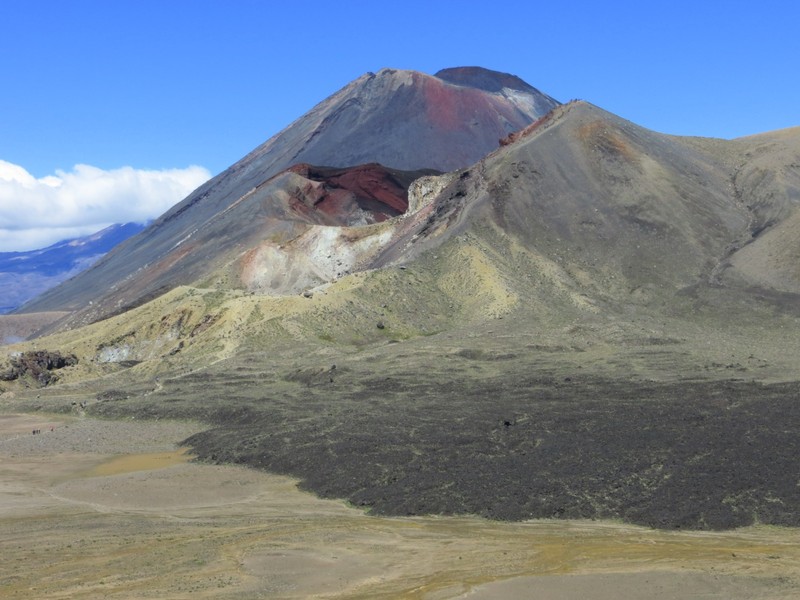 Fumaroles near the bottom 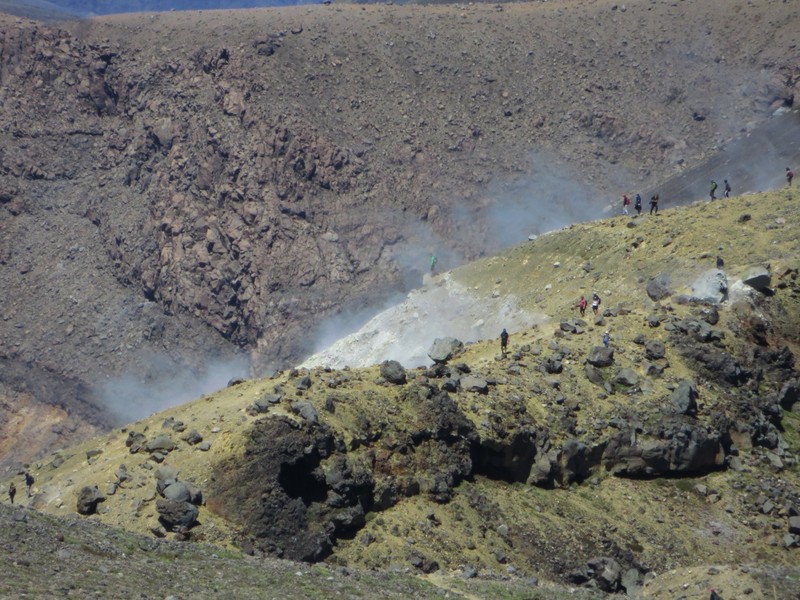 On a summit next to Mt Doom, many folks were descending, some practically running 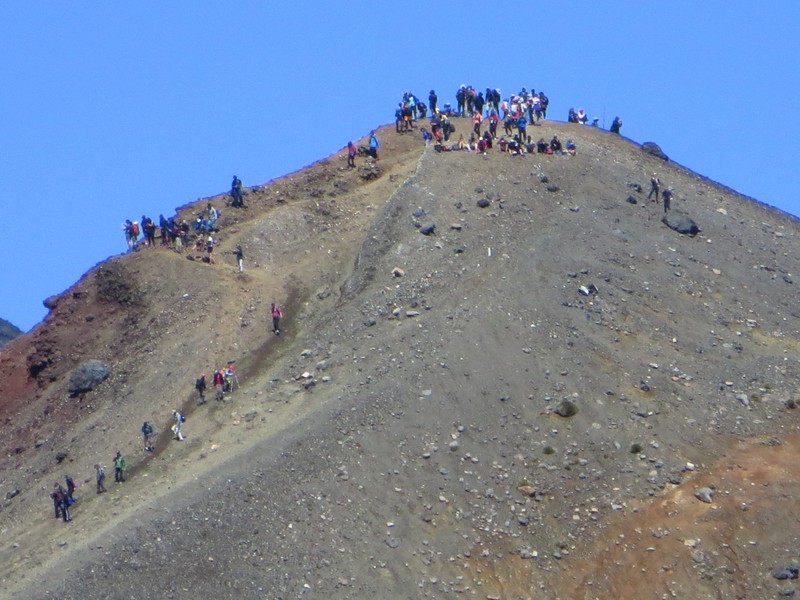 It seemed rather dangerous to be going against the traffic, and so this is where i decided to turn around. I had already been hiking more than 5 hours and figured this was close to the half way point. I assumed that I would run into Bill somewhere on the way back. Unfortunately this was not to be. Apparently there were just so many people on the trail that we must have walked right past each other.

The descent was also beautiful 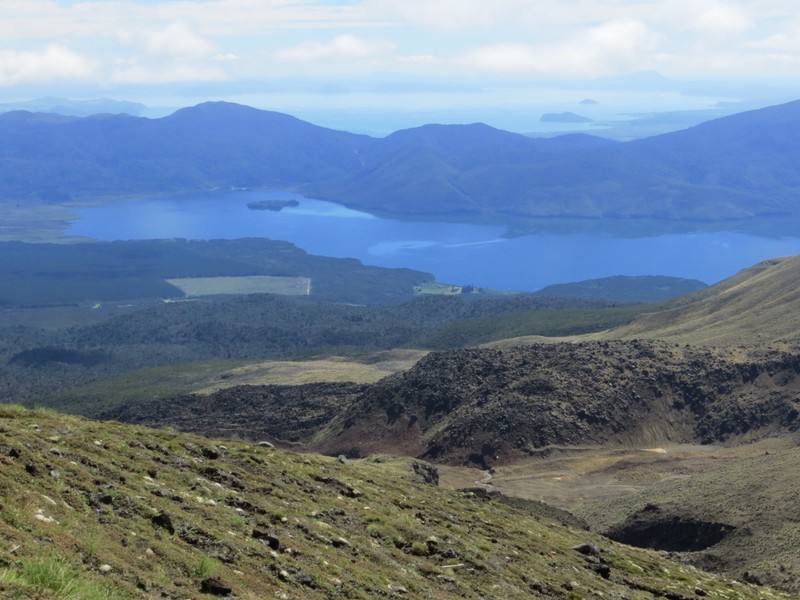 Billl was not there when I got back to the trailhead. After more than 1 and 1/2 hours went by and he didn't show up, I began to worry. Just as the parking lot was clearing out and the last shuttles leaving, he turned up. As I later found out, he continued up to the same point I did before turning back, but it took him an additional hour or two to make it back down.

Van Life While Hiking in New Zealand and Tasmania

This trip began as the brain child of my good friend Bill. Originally he had wanted to go some 10 years ago while his son was studying in New Zealand, but his wife got sick and the trip had to be called off. At this point his wife was not interested in an intensive hiking experience and so I decided to accompany him. Tasmania was my addition . Some 15 years ago, I had met three Tasmanians hiking in Torres del Peine in Chile. What are the chances of that? At any rate they insisted that I must come to Tasmania, and since it is relatively close to NZ we decided to add it on to this excursion. A bit late, but what the hell.

The van idea was Bill's. That seemed the best way to get around, camp where we wanted to, and save some money on hotels and food as New Zealand is not cheap. We actually rented three separate vans, one in the North Island, another in the South, and finally in Tasmania. Two out of three were actually decent, though the third, Wicked , was cramped and uncomfortable. Your basic cheap piece of shit, meant for young people a third our age. Pictures to follow later. The only saving grace about Wicked was that it was automatic whereas the others were stick shift, and the stick was on the opposite side as here in the states since they drive on the left. Just picking up the van through a driving rain, and an interminable number of round abouts choked with traffic, Bill almost killed us a few times. I tried not to scream too loudly since he was more than willing to drive the thing, and I was not particularly eager to take it on.

After a couple of nights to get over our jet-lag, in your basic, overpriced, Indian run, close to the airport hotel, we headed out of Auckland. It has mushroomed in population in the last several years and I'm sure it has its good points, but we really didn't stick around long enough to find them. We were eager to get on the road in our new home with wheels.

First stop was Mt. Ruapehu, a volcanic ski area several hours drive from Auckland. We donned hiking gear and dutifully headed up along the ski lifts in the rain. After a few hours, and maybe 2000 feet of elevation gain it began to snow. Bill headed down and I followed shortly thereafter. 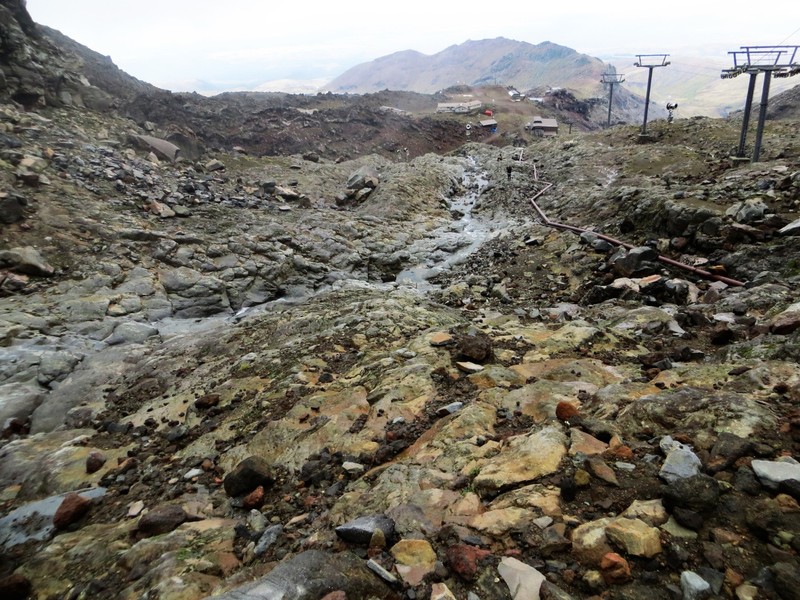 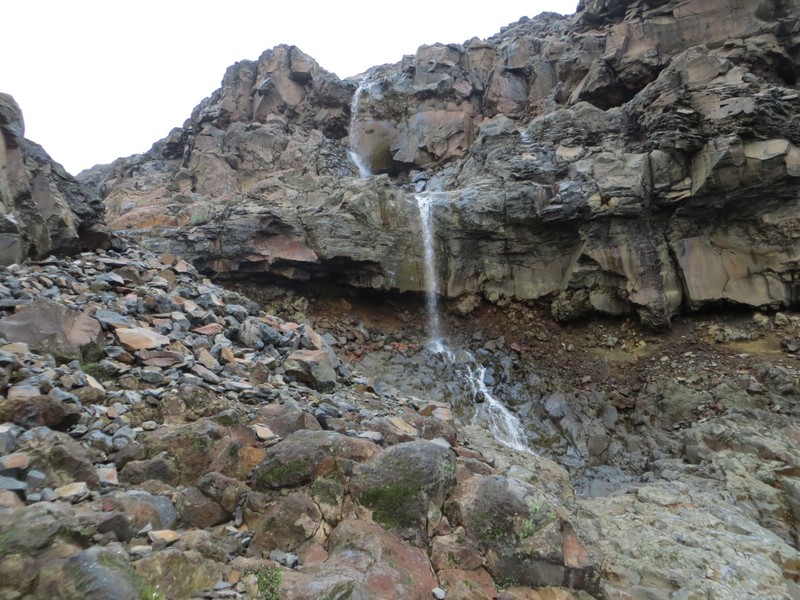 Given the weather we decided to push on to Tongariro National Park. We arrived at dusk, dutifully put our money in the kiosk in front of the camping area, and of course, found out the place was completely booked. No matter, we found an out of the way unofficial spot and spent the night without the ranger banging on the door in the middle of the night.