When You're at Raka's, You're Family

By the time we arrived back in Ubud, late evening, Nanette was already feeling sick. We were lucky to get a room at Raka's, as he was full, and did us a favor by turning away someone else who contacted him earlier. Nanette was on the toilet most of the night, and vomiting as well. The bathroom looked like a war zone in the morning. We struggled to make it a block and 1/2 to a nearby medical clinic. They were very nice, but more or less confirmed what we were already doing. Keep up the Cipro and stay hydrated. They gave us a powdered form of Gatorade to balance the electrolytes. Miraculously, I seemed to have ducked the bullet on this one. Perhaps it was the jaffles, a kind of grilled cheese sandwich, that Nanette ate at the airport, and I did not. Hard to tell. The next several days were not fun. She was very weak and had trouble even keeping down the rice pudding that Raka made himself. "Not to worry,? he said. "Raka take care of you just like family." 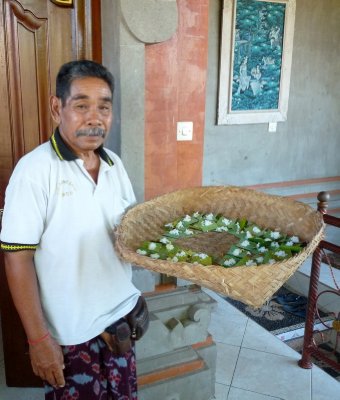 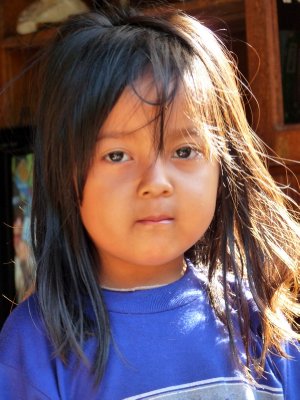 For Nanette this was the final straw and she was ready to go home. After several hours on the phone I was able to book her a flight to New York through Singapore, using the same number of frequent flier miles. I planned to go to southern Laos for another few weeks. I had previously explored some of the northern parts of the country and loved it. This was my chance to spend more time with these lovely people.

One day I met Miriam in the local warung (eatery) right on our little alley. 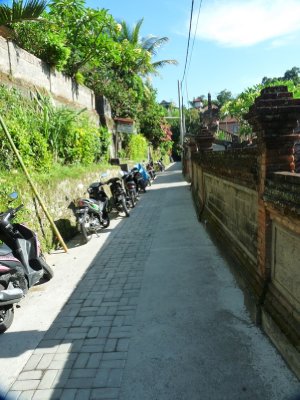 She is a few years my junior, French, and in the usual way that travelers do, I asked what she was doing in Bali. Somehow she did not seem like a typical tourist, and indeed she wasn't. In halting English, she told me that she has volunteered in Ubud for almost six months with disabled people. Then, in what seemed like a very short time to impart this kind of information, told me that her husband and daughter were killed in a car accident two years ago. She is hoping to go to Calcutta in the next few weeks if she can straighten out the visa issues there. I offered to help since her, and together we went to off to the tourist office. It didn't do much good. For whatever reason the Indian consulate in Jakarta only wants to give her two months instead of the usual six. She is obviously still in a fragile state, crying and easily upset when they told us this. I worry about how she will fare in India since Bali is a far easier place to deal with.

The following day we left. Nanette, who was feeling somewhat better, departed for Singapore, and I for Bangkok. I went back to the hotel near the airport to avoid the hassles of downtown, not to mention the increasingly dangerous political demonstrations. From there I intended to fly to northern Thailand and then into Laos by bus.

I know all of you out in the blogopshere have been wondering what happened to me after my last post. Well, I have more or less been totally preoccupied with renovating my kitchen, a project I could not have even contemplated without the incredible efforts of my friend Bill. I won't bore you with too many details. Suffice it to say that we are working on the final third or so, and I have begun to emerge to resume blogging, among other aspects of my life. In case you have never had the experience, a kitchen renovation is disruptive, as everything has to come out of the cabinets and then is stored wherever you can find a place for it. Cooking is an interesting task among all the tools and missing plates and silverware.

But without further ado:

After Tette Batu, we continued on to the other side of Lombok to Sapit, high on the side of the volcano, Rinjani. The views of the mountain and rice fields on one side, and the ocean, the island of Sembawa, and other small islands on the other, were simply stunning. Clouds rolled in every afternoon though the rain held off for a few days. Higher up it was a different story. 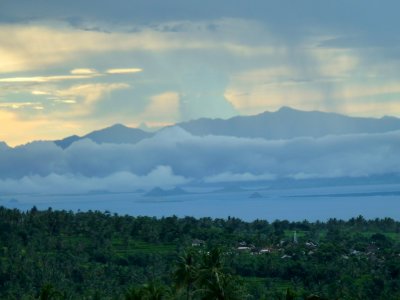 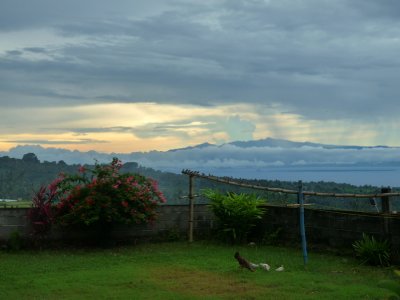 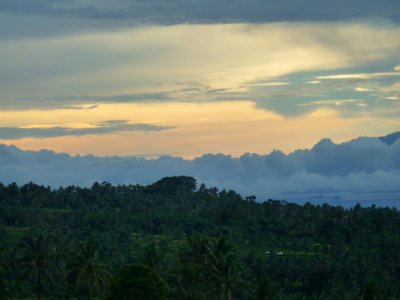 No other tourists here and the locals are obviously not used to seeing us. Wide smiles from the women and children and older men, while the younger men seem more suspicious. 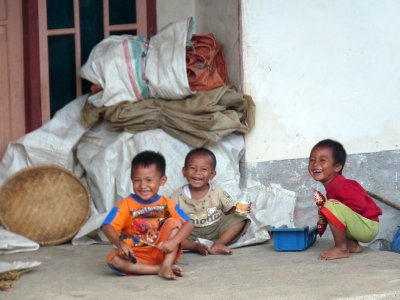 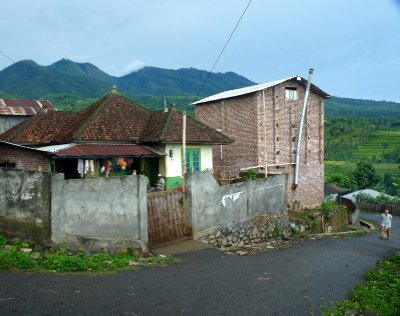 Our host, Adit, speaks English well, having lived in Chicago for three years. Originally from Borneo, he was raised in a middle class family, and it seems as though most of his many siblings have good jobs and two live abroad. Nanette is feeling somewhat burnt out with the rigors and discomforts of travel, and made it clear that she doesn't want to spend 12 hours on a bus and another 8 to 10 on two ferry rides to get to Flores, our original destination. I rode on the back of Adit's motor bike to check things out in town, which was a very bumpy hour ride away. We stopped at a travel agency, but the agent was not particularly helpful. There is a flight to Flores, but no one seems to know when it leaves and returns. We have discussed the possibility of Nanette returning to Ubud while I go on. Private transportation is difficult to arrange here, and expensive. Local transport is extremely difficult to access, and very slow. You can't get there from here, or you can, but nobody knows how, and it will take all day in any event. The food is not particularly good, at least by Thai standards, and relatively expensive compared to other third world places, and the 4 AM call to prayer continues to wake me up too damn early. On the other hand, there are beautiful walks on the mountain trails and the town is unspoiled. 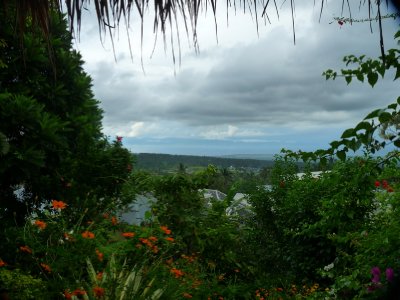 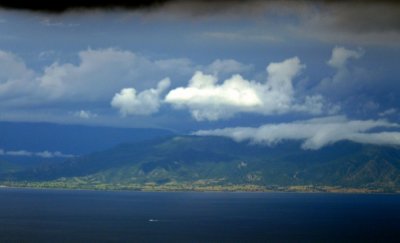 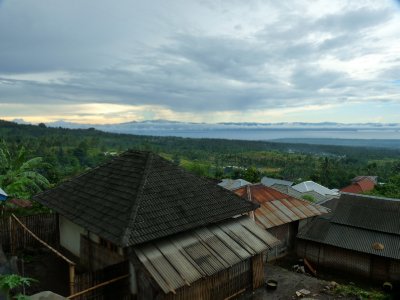 We are often no money

I wholeheartedly agree, but after a few days, things started to get a bit weird with Adit. He kept giving us different information about climbing the volcano, seemingly whatever we wanted to hear, except the price, which remained high. This was the tail end of the rainy season when it was considered too dangerous to climb, but it was about to change. We asked what day the mountain would be open, and Adit would say that we could climb whenever we wanted to, even though the park was officially closed for another week. When we pointed to the clouds obscuring the top third, he would say that it was not raining. When Ryan and Cassie, our American friends, inquired about a taxi to the airport, he first said it would be about about 16US and then suddenly the price doubled because his driver was sick. It was hard to know what to believe. He seemed very helpful one minute and then wanted to cheat us the next. A Dutch couple showed up, staying nearby, and they said that return flights from Flores to Bali were highly erratic, and in the end, they had to take a three day uncomfortable boat ride to get back. So without good information we decided to go to the airport with our American friends, Cassie and Ryan, and head back to Bali, while they went on to Singapore.

The ride to the airport was harrowing. Our driver, the same one who had brought us to Sapit from Tette Batu, drove like a madman, weaving in an out, and cursing whenever anyone got in his way. He then demanded an addition $10 despite the fact that he had already agreed to the price. In the end we gave him half, but felt ripped off and pissed off, though lucky to have made it in one piece. It seemed to us as though many people in Lombok are rip off artists and scammers, charging whatever they can whenever they can, and then harassing us if we objected. At the airport, we found out that the flight to Flores didn't leave for another week. Our friends left, while we had to hang out for most of the day waiting for our flight.

We ate dinner at a local restaurant, and our waiter was a charming and innocent college student. He reminded me somewhat of our our monk friend in Burma, Nianee. His family were poor farmers , but he studied English and tourism in Mataram. paying his own way through waiting tables. He was eager to talk with us and openly acknowledged what we said about some of the people in Lombok trying to rip us off. It was good to meet him. It is so easy to judge a place and its people with a few unpleasant experiences. Umar provided a more balanced view.