NOTE; FOR WHATEVER REASON, LAST BLOG ENTITLED, BOOK FOUR, PARTS OF EUROPE, TURKEY AND MOROCCO, DID NOT AUTOMATICALLY GET SENT TO MY LOYAL READERS. IT FOCUSES ON LISBON, PORTUGAL. PLEASE CHECK IT OUT ON TABLE OF CONTENTS.

After a great week in Lisbon, we took the three hour train to Oporto, which, you guessed it, is THE place for Port wine. It was an amusing city to spend a couple of days. Much more run down and poorer than the capital, it is full of old buildings and warehouses with many places to wander. 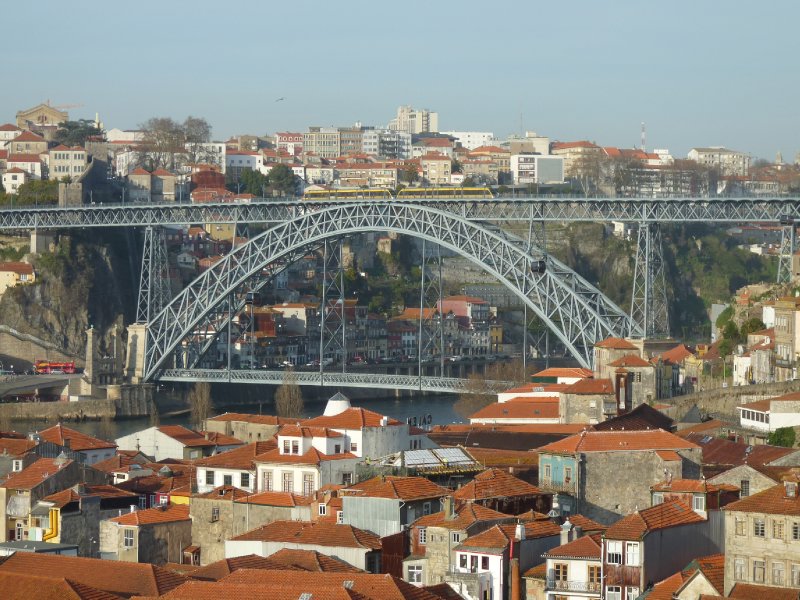 There are far fewer tourists here and the place has a much more provincial feel than Lisbon, which has much better food. Our small, spotlessly clean guest house was run by a woman who spent 25 years in France and barely gave us the time of day. We didn't feel particularly welcome, especially after Bruno's Lisbon Story. However the port wine cellar tours were fun. Many of the wineries date back to the 1700's. Port is actually consumed far more by the Brits than the Portuguese and always has been. The wine is stronger and sweeter than most, but nevertheless it was a kick sitting outside tasting and gazing at the river and bridge below. 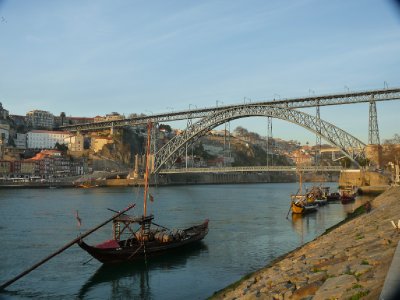 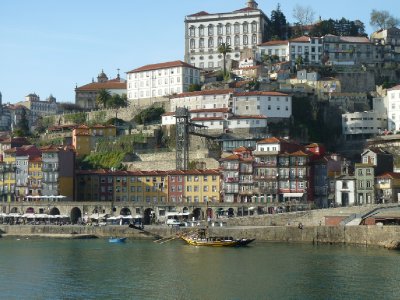 Book Four: Lisbon and other parts of Europe, Morocco, Turkey

Every new journey begins with a vision or an idea of what you want to see and where you want to go. For me, it is also what I want to learn, both about the places and the people. In this particular case, the journey revolved around visiting several friends we had met on previous trips and then constructing the excursion around them. We began in Lisbon and although we had visited Portugal once before it was basically a beach vacation with our children. In this case we were there to see Bruno, someone we had met on the beach in Burma and spent the better part of a week together, talking, listening to Fado, and unfortunately also being sick from eating the fish on the beach, but that story is told under my Burma blog.

At any rate, Bruno picked us up at the airport and brought us to his guest house, Lisbon Story, right downtown, but low key and quiet, just what I would have expected from him. It just so happens that this is what he does, owns and manages a guesthouse. After two years it was great to see him, although now he had a new and pregnant girlfriend who we met several days later. That evening we went for baccalau, similar to what the Italians prepare on Xmas eve. it is dried and salted cod which is then reconstituted, more or less the national dish of Portugal.

The next day we were more or less on our own and took the famous trolly 28 for a grand tour of the city, which seems like a cross between San Francisco and Valparaiso, Chile. 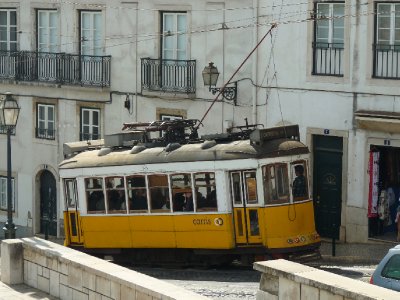 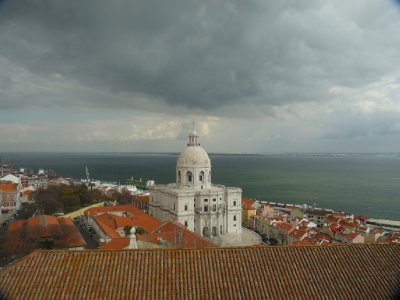 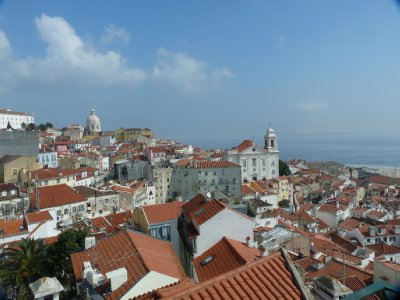 The trolly took us to a mirador and we sat outside in the warm sun with an expresso gazing out at the sea. The city has a very relaxed feel without much traffic, and blissfully no buzzing motorbikes or Vespas. 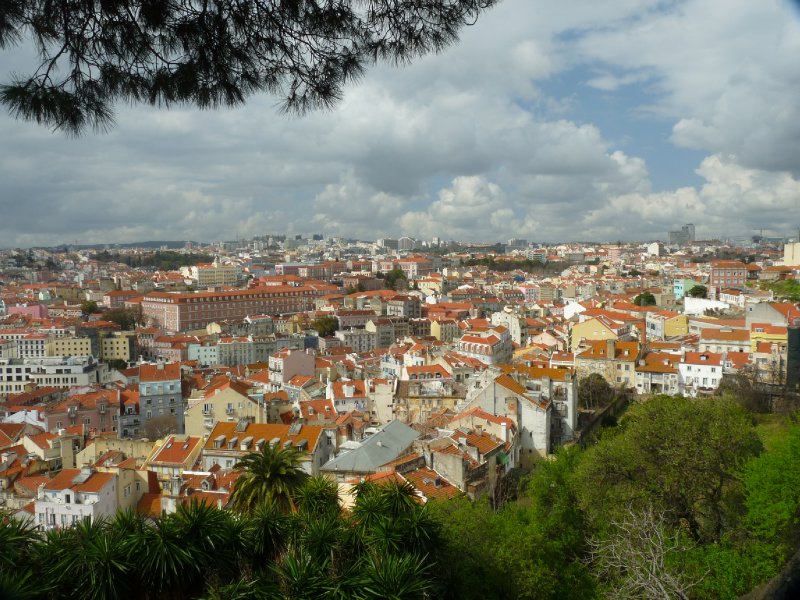 We spent a while in Monesterio San Vicente, rebuilt many times, but still impressive inside and out, and then wandered down to the nearby Thieves Market. 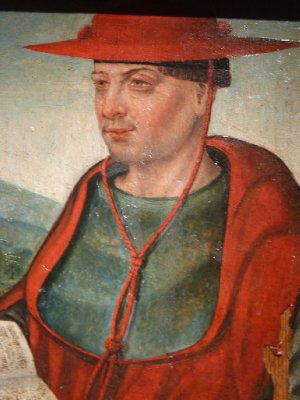 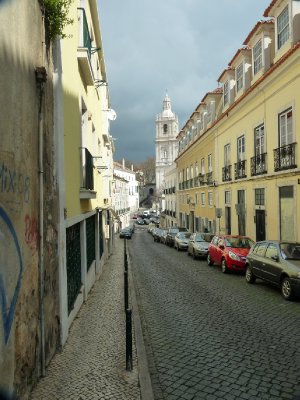 There we had lunch in a tiny place and attempted to practice our non-existent portuguese. We can sometimes get by with spanish but the portuguese accent is much more clipped and some of the vocab is different.

From our room, named Escritor or writer, with many famous quotes on the walls, we overlooked Rosio Square, a gathering spot for Portuguese Africans who seemed to congregate below our window to shoot the breeze. In the middle of the square is a small monument to the Jews massacred by the Portuguese in 1506, predating the inquisition by several years. Near to that is a small storefornt where Ginjinha is sold in plastic shot glasses for 1.2 Euros. Ginjinha is a cherry liquor, sweet, but delicious, more like a cordial. Needless to say we have partaken several times, as has the large crowd gathered outside the door. 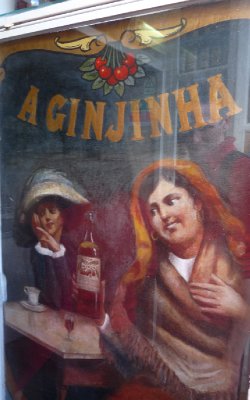 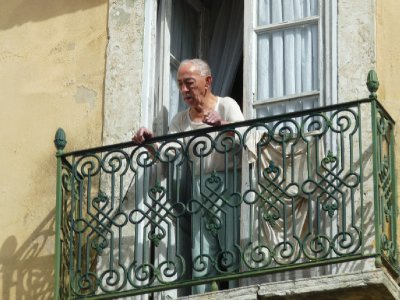 Luckily the square empties out at sunset and so things get fairly quiet. The bar scene moves up the hill to Bario Alto for most of the night, but we did not check it out.

Yesterday we had another full day of wandering the city in the morning, and then Bruno picked us up and we drove out to Cascais-Sintra, right on the water. We stopped for his girlfriend Rita, and then picked up his friend Pedro. From there we went hiking in foggy woods that looked very much like the area around Muir Woods and Stinson beach in SanFran. No redwoods, but lots of eucalyptus trees. After an hour of easy walking we got to the top of an abandoned nunnery with what would have 360 degree views, but the fog was too thick. On the way down we got a few glimpses of the sun setting over the water as the fog broke slightly. 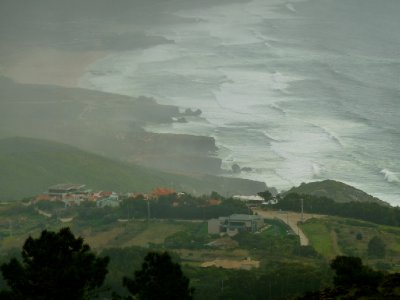 From there it was on to Cabo Roca, the westernmost point on the continent, complete with lighthouse and water crashing over the rocks, remarkably similar to Point Reyes. 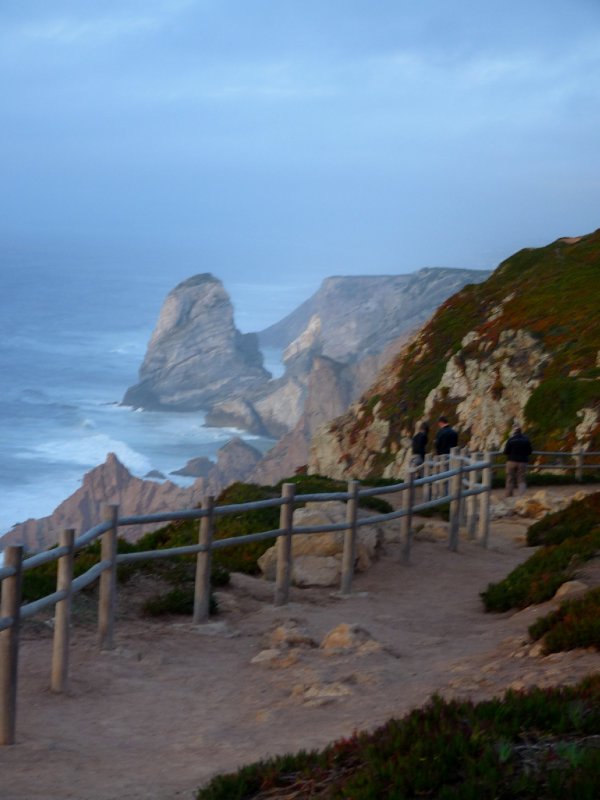 We returned to Pedro's unique house, designed and built by him, full of cubbyholes and nooks of wood and cement, on a hillside next to other small houses. We had tea and cookies and then rode back to the city for dinner and Fado in Bario Alto. We dropped Rita back home as her pregnancy made her tired. At the restaurant we were treated to songs from most of the waitstaff and even the cook. Fado is a soulful, melancholic music, about lost lovers, unrequited love, etc. Some say it is a metaphor for the lost empire of Portugal. Finally we went to a very ornate, old, and overpriced bar for a nightcap to celebrate Nanette's 65th. Quite a night.

We went back to Sintra another day and this time the views were unlimited. We also got to see an abandoned Capuchin Monastery, very old and now a museum. 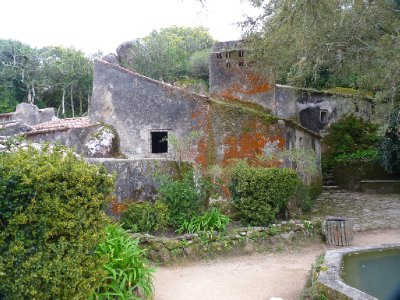 However the highlight was several hours spent walking around the grounds of Quinta de Regaleira. Built around the turn of the century, it feels like a combination of something out of Harry Potter and Coleridge's Kubla Kahn. The castle is not as impressive as the grounds, which have underground passageways, fountains, gardens, etc., all of which supposedly have some kind of mystical significance related to the Masons and the Knights Templar, of Da Vinci Code fame. Incredibly, one of Bruno's friends grew up in the Castle, although it is now publicly owned. 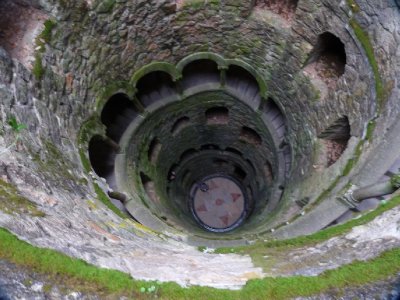 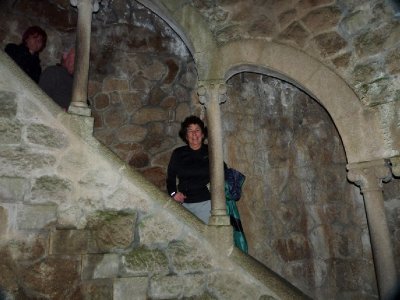 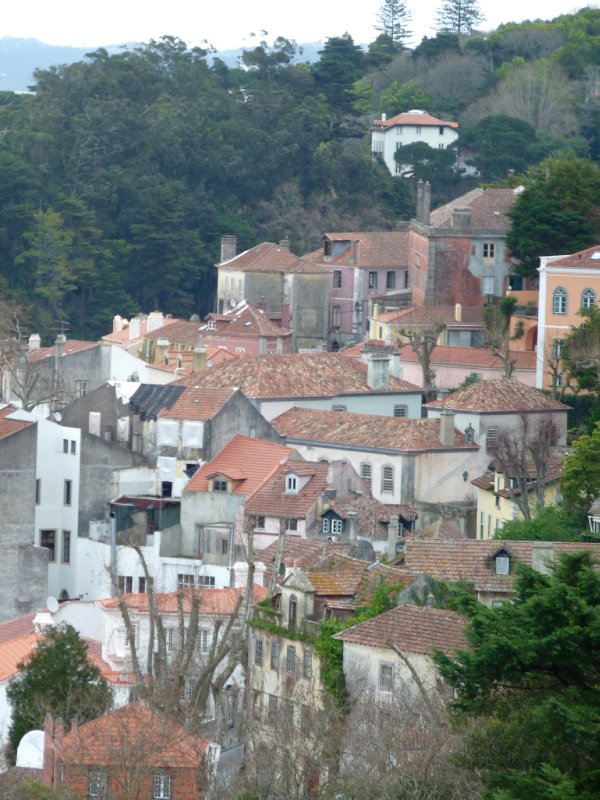 On Sunday we visited the Gulbenkian Museum, free that day, where we ate lunch and the walked back on boulevard Libertade, a very wide street with big hotels, very different from the narrow, windy streets of the older part of town. Much of Lisbon was destroyed in 1755 by an earthquake, and so while relatively old, most of the buildings do not predate that terramoto. 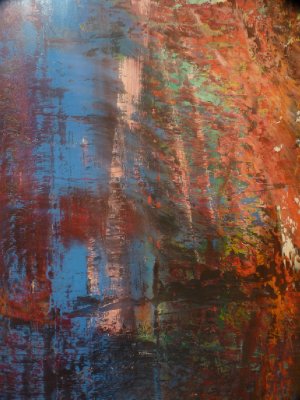 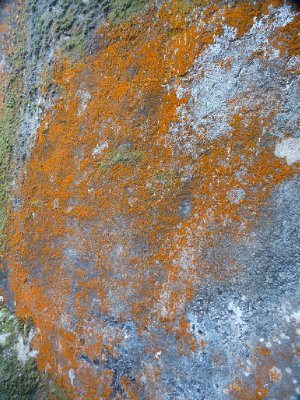