Siem Reap, home to Angkor Wat, is a boom town with new hotels springing up overnight, though one wonders if they will ever fill up all the rooms despite the two million farangs who come here each year. We have met people from China, Korea,Japan, South Africa, New Zealand, Britiain, Singapore, and a few from the States, some of whom are teaching in international schools in China.

The ruins are vast and we were lucky to have the services of Bon, our indefatigable tuk tuk driver who accompanied us everywhere, knew some of the history, and even told us where to eat lunch. 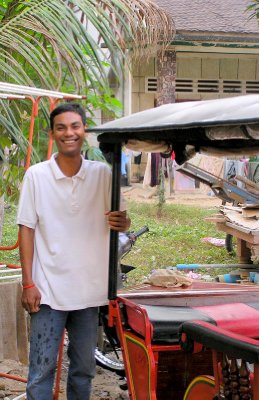 In the main temple area there are archways upon archways opening into each other, and creating a sense of perspective that suggests infinite space. We have been told that it symbolizes the beginning of the universe with Mt. Mera, a sacred peak, at the top. There is also a blending of Indian and Khmer influences, Hindu and Buddhist, that have been built up over successive generations. Unfortunately a number of old stone heads and other artifacts have been stolen by private thieves and museums, and of course, Pol Pot did his best to destroy the place. But no matter, Angkor has survived all of these things, and continues to impress with its sense of timelessness. I am bigger than all of those of have tried to destroy me, it seems to say, and I will be here long after you are gone 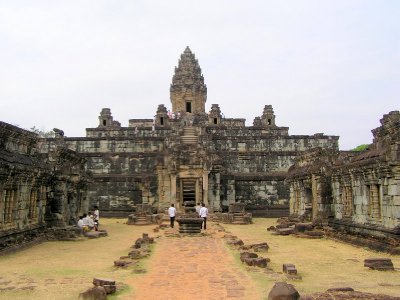 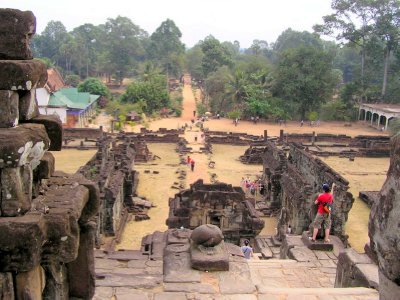 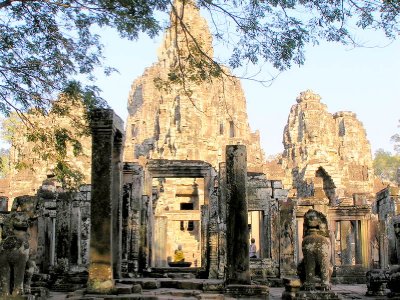 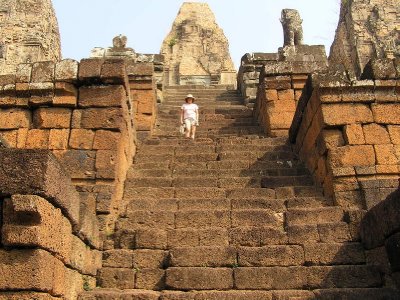 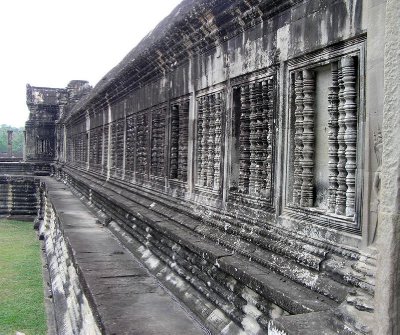 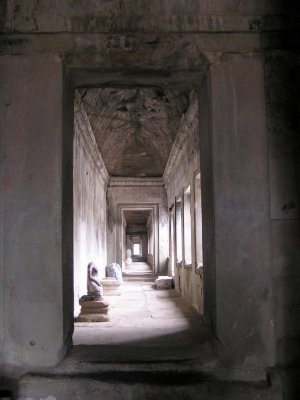 While the architecture is Khmer, some of the carvings are clearly Indian in origin. 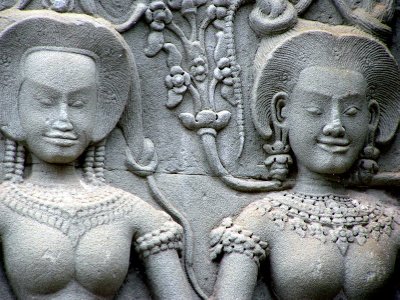 One of my favorite places was the temple of Bayon, with its enormous 30+ feet high Buddhist heads. It is part of Angkor Thom, which is even older than Angkor Wat, dating back to 800-900 AD. 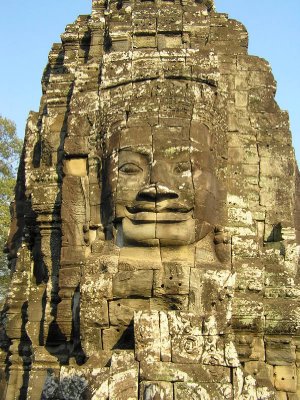 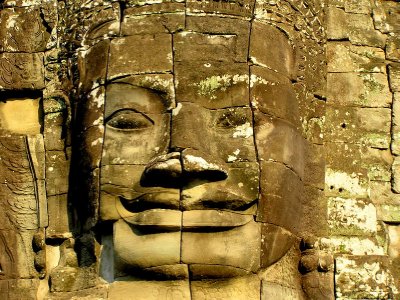 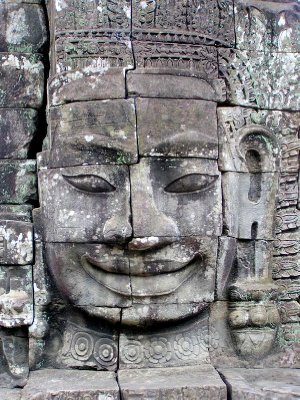 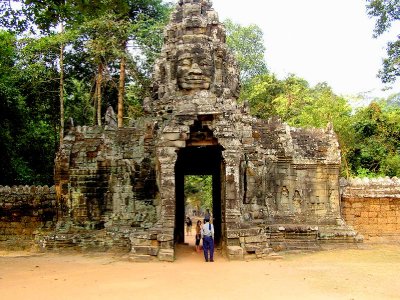 In Ta Prahm, the jungle is taking over. 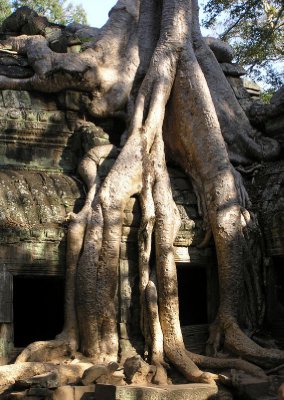 Even in three very full days we did not see it all. 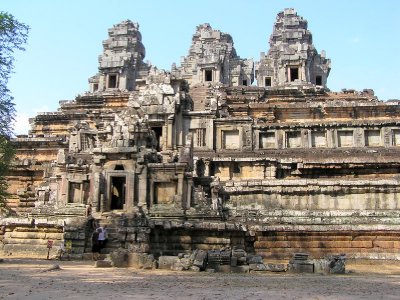 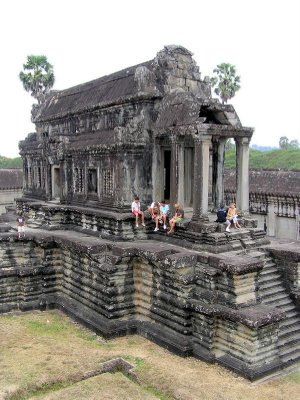 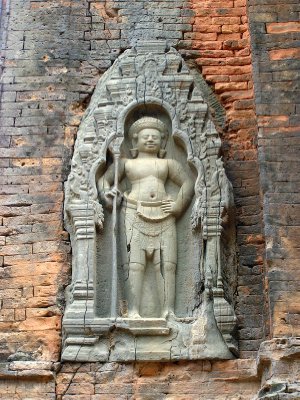 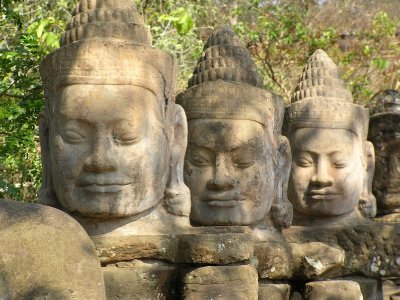 We continue to be amazed by the Cambodian people. Yesterday while we were at the ruins, we were approached by a ten year old girl trying to sell us postcards and water. Nothing unusual about that. Then she asked" Where you from?"

" New York", I said.
"Where in New York?"
"Near New York City," my standard response.
Then she said, "Capital of New York not New York City. Capital Albany."
"That's where we live." I said.

This of course, was quite impressive, but she then proceeded to rattle off the names and capitals of all 50 states, something not many ten year olds could do in the states.

"How did you learn all that"?
" Oh, she says, "Just talking to tourists like you."

Just to give the full picture, this was not a well off educated kid, but basically a street kid living by selling things at Angkor. Whereever we went, just about everyone spoke some English, essential I guess to trying to get ahead. Even the tuk tuk drivers, are studying English dictionaries when they are waiting for their customers. What spirit. 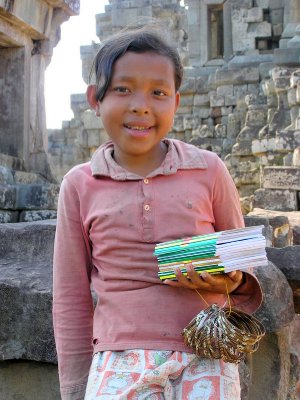 Of course, there are always two sides to getting ahead. Yesterday we got into a long conversation with the cook at our hostel, who happens to be the niece of the owner. She told us all about her uncle, Kim, who runs the Okay guest house in Pnom Penh. As the oldest brother, he is the family patriarch and determined to become wealthy and help out his extended family. Based on what we saw, he seems well on the way to doing this. Kim has already helped a different brother buy a guest in another part of Siem Reap. This makes three owned by the same family. Mostly they are modest places, but as business picks up I'm sure they will go on to purchase more upscale hotels. At the same time, our tuk tuk driver Bon, who we pay $15 a day, hardly sees any of this. He works for the the guest house, and they only pay him about $20 a month, plus he has to help out in 'the restaurant after driving all day. We have grown quite fond of him and tried to help out as best we could by giving him a big tip, and also showing him how to use the internet to create an email address. He got a big kick out of this, but unfortunately we never heard back from him.

What they say around here is that the Cambodians plant the rice, Thais sell the rice, and the Laotians listen to the sound of it growing.

After spending the night in Koh Kong, a rather seedy border town in Cambodia, we continued on a minibus ride with several river crossings. We either had to walk over four incomplete bridges or be ferried across on two canoes that were lashed together. We finally arrived in the Capital in late afternoon and are now ensconced at the Okay Guest House, highly touted both in the Lonely Planet, and in person by touts at the bus station, who were there to greet us in force. It would be hard to beat our 4th floor room with fan and AC for about $10 US. Okay, we had to walk up, but worth it none the less. 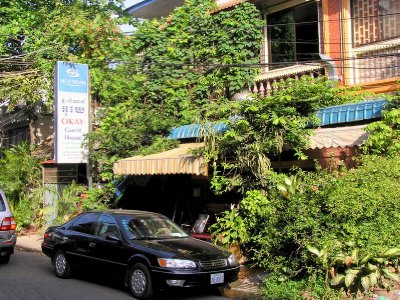 We spent time walking along the Mekong riverfront. There was a promenade, always full of action with Buddhist ceremonies and live Kymer music. There was a constant parade of different kinds of people, food and flower stalls, and there were Wats (temples) on both sides of the road. It does not feel dangerous here, at least during the day. 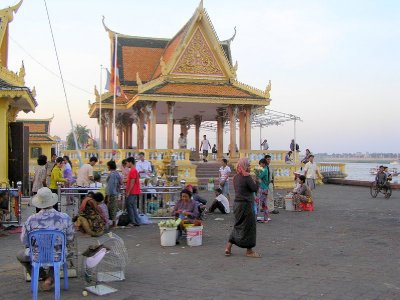 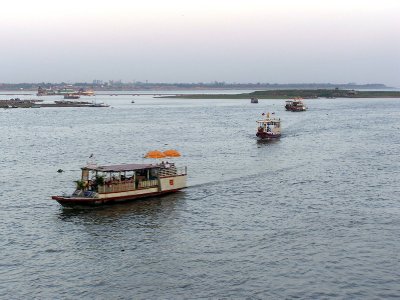 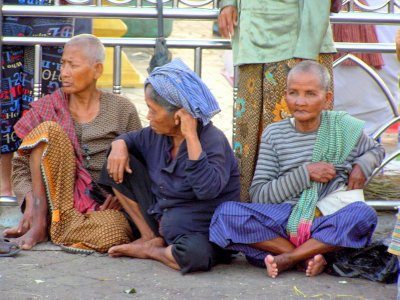 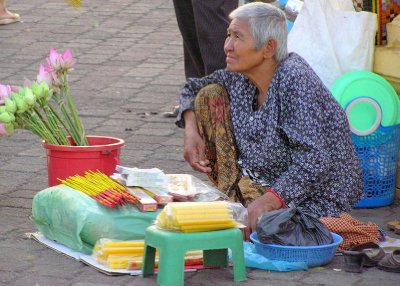 On another day we hired Bim, ourtuk-tuk driver to take us around town. 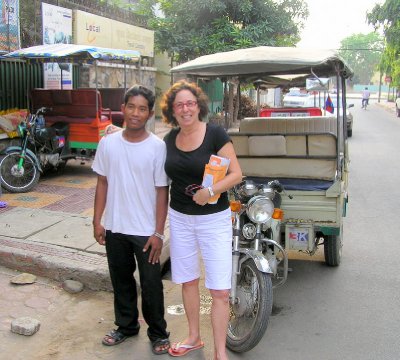 We went to the genocide museum, which is located in an infamous jail where Pol Pot and his brigades tortured many people. Looking at the city now it is hard to imagine that at one point it was practically empty. Everyone was forced out to work in the countryside.

Outside of the Museum 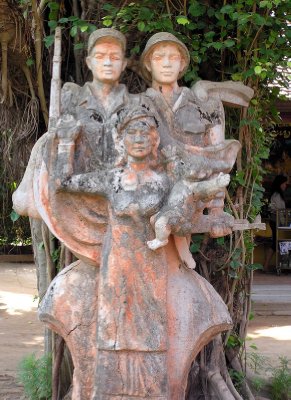 On a very different note, we also went to the National Museum which had ancient Kymer objects and some art work. These next shots were taken in a small pond in front of the building. 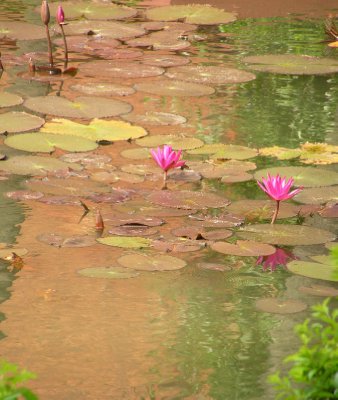 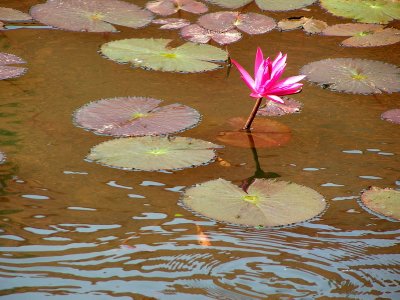 Lunch was at an restaurant, Friends, run by an NGO to help street kids get training in cooking, waiting tables, restaurant management etc. It was excellent, and just a small example of some of the work being done here to help this devastated country get back on its feet.

In the afternoon we continued on to the the Royal Palace, which has extensive grounds and many buildings. 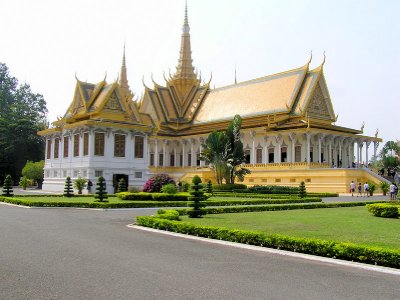 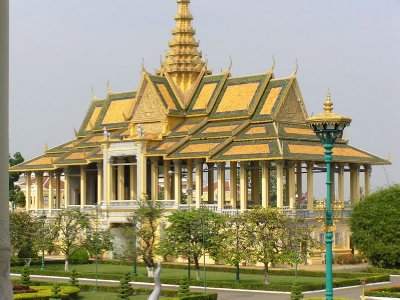 We spoke with some young Americans at our guest house, which was unusual, as we have met so few of them on our travels. One of them told us that the owner of Okay was also a travel agent, so we had him purchase air tickets from Siem Reap to Luang Prabang, Laos. What we didn't know was that I would have to pick them up on the other side of town. To get there I went on a wild ride on the back of a 50cc motorbike, which is mostly what they have here. The bikes seem to come in swarms, and it feels and sounds like you have just stepped on a nest of yellow jackets lurking in the grass. The lights are often useless, and the drivers careen at you from all directions, which necessitated that we do the same. While my driver was madly changing directions, I hugged his back like a long lost lover. He didn't seem to mind, and more importantly we got there and back safely.


Praying to Buddha can only do so much under these circumstances 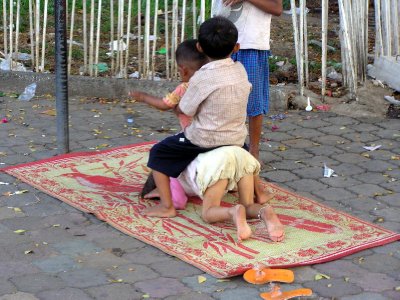 After three days in this city, we have found the Cambodians to be gracious and friendly people, especially when you consider their history. A surprising number of them speak at least some English and some of them seem willing to talk about their experience with the Khmer Rouge. One local internet owner told us of his personal experiences having to work in the fields after marching for weeks to get out of the capital. He burned one arm badly, and his other arm was broken by Pol Pot and company because he wasn't working fast enough. He was 13 at the time and still has the scars to show for it.