At The Farm in Wangen

The weather here is much like early Spring in upstate New York. We have only had glimpses of the snowy high mountains in the distance, because many days have been cloudy, chilly, and rainy. We have been helping out with the renovation work, such as grouting and painting, which is fine, particularly given the damp weather.


Joachim and his brother in our yet to be finished bathroom. 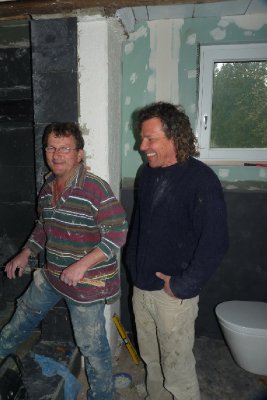 Most nights we ate dinner with Peter and his family, as well as Antonette and Joachim in the farmhouse next door. Peter is hoping that the barn will be ready enough for them to move in a few weeks, as they have to vacate the farmhouse so the new owners can move in. It will take much longer for Joachim and Antonette as they are doing most of the work by themselves.

Peter is a kind of larger than life character, a bit like Falstaff, always eating, drinking and laughing. It is a bit dangerous to ask for food and drink in his house, as he will always bring six times the amount you need. In fact you don't even have to ask. 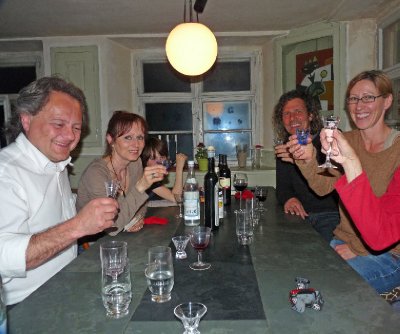 A much better picture of Max 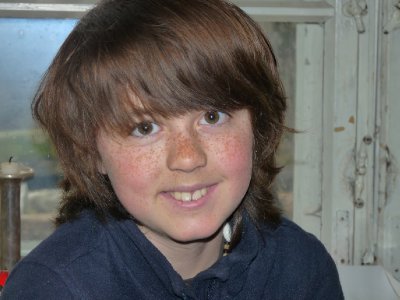 Peter was a kind of ne'er do well in his youth,quite rebellious and always challenging authority. As a teenager, he moved to Lindau in nearby Bavaria, because the school system there was somewhat looser and more tolerant. He now owns a successful architectural firm in Wangen with several employees. Joachim was also a rebel as a kid, and his parents sent him off to boarding school from age 11-16, not so different from yours truely. It seems that the three of us have a fair amount in common, though both of them are more than ten years younger than I.

One cloudy day, he took us on a tour of Lindau, which is on an island in Lake Constance. Now it is a charming resort town with many old buildings. We went on to cross the Austrian border, no passports needed, and walked around a different side of the very large lake, similar to Lake George.

Lindau harbor and old building. You can see why they call it the Bodensee. 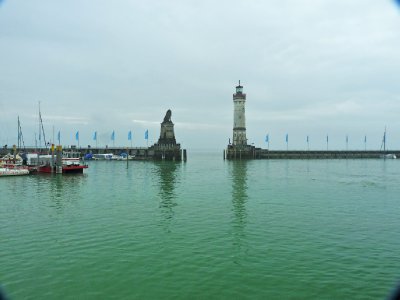 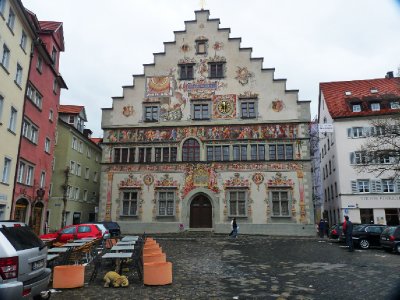 Not to be outdone Wangen too, has its charms. 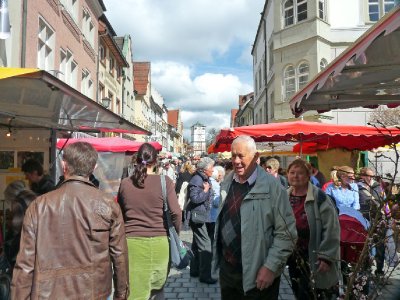 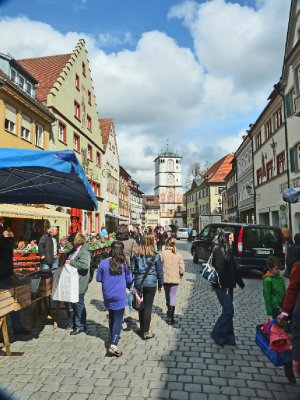 When we came back, we helped Antonette make spatzle, a local cheese, egg, and noodle concoction, very much a group project. Antonette and then Joachim's daughter, managed to drop the batter on the floor two times because of the lack of counter space, but, no matter, we ate it any way. 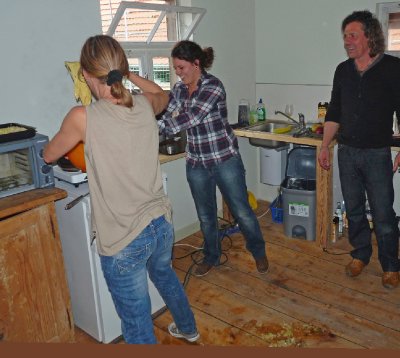 Yesterday, I went with Antonette, Joachim, Lissie, her son Max, and a friend, for a hike in the Icetobel. It is called that because it is a deep gorge with a series of water falls, and tends to hold onto ice and snow late into the year. It did not disappoint on this day. We hiked for about 1 and 1/2 hours in a cold rain that turned to snow at the end. Glad to get back to the car, we hunted for a restaurant that was open in the late afternoon. I had a typical sausage, noodle, and lentil dish, good, but heavy, as is a lot of the food here.

Today we awoke to about three inches of snow. I guess the Shapiro's have brought their weather with them. Our plan was to go walking in the high mountains, but that was put on hold. Instead we went to a nearby castle and then for some heavenly pastry. A good time was had by all.


View from the top of the castle 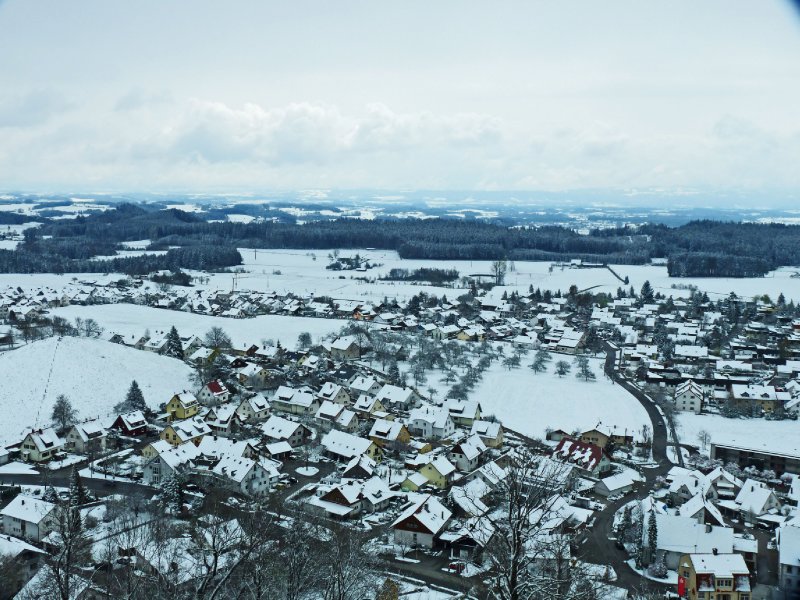 The grand pastry and teahouse 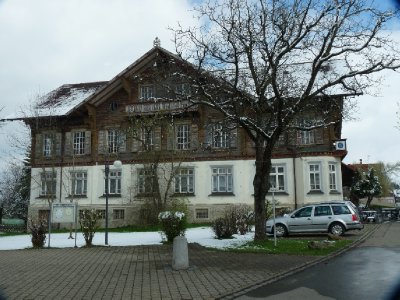 On to Wangen, (pronounced V) Germany

We left Tafaroute on a narrow, serpentine track through the mountains with huge drop offs most of the way back to Agadir. There we dropped off our daughter Mia, and boyfriend Dan, in front of a grand taxi stand where they made their way to Casablanca and Fez. We headed back to Taroudant to return the car and spend another night with Abdel. It was nice to get back to a place that seemed slightly familiar, and the maize of alleys did not seem quite as intimidating. We noted how friendly people seemed. Perhaps some of them recognized us from before? We retured to Marrakesh the next day by grand taxi, much shorter than the bus, albeit more expensive because we paid for extra seats to have more room. This time we stayed right in town in a cozy riad, Bleu and D'orange, which was, not surprisingly, French run and owned.

After Nanette enjoyed a massage and pedicure at a nearby, but rather upscale spa, we left the next afternoon for the airport. The plan was to fly to Basel, Switzerland, and spend one night there before taking the train to Friedrichshafen, on the Bodensee (Lake Constance) in southern Germany. There, we would be met by our friends Antonette and Joachim, who we met in China in 2008, and they would bring us to their farm in Wangen.

Ah, the best laid plans. We arrived at the airport more than two hours early, but nothing was posted about our flight and the departure time came and went. No one seemed to know anything about it, though we noticed a number of cancellations, which only increased our anxiety. There was nothing to do but wait. Finally, after another two hours, they posted our gate number and we assumed we would leave shortly, only to be told that we would have to wait yet another hour before being told when our flight would depart. And so we sat down on the floor in the small departure area as all the seats were occupied. We happened to sit next to two Swiss girls, though one was from Ethiopia and the other Montenegro. They spoke English well, and we chatted with them about the flight situation, but they knew little more than we did. Both were office workers on a five day holiday in Marrakesh. Another two hours went by, and we saw people queuing once again. This time we succeeding in boarding and then a long announcement, first in German, and then English and French. Apparently there was an air traffic controllers strike in France, and they were limiting the number of flights that could land and therefore take-off from Morocco. Of course, we weren't headed for France, or so we thought. The captain said we couldn't leave for another 90 minutes because of this, and since the airport in Basel would be closed after our newly scheduled departure time, we would have to go to Lyons in France, and then take a five hour bus ride to get to Basel. I went back to talk to the Swiss girls who confirmed that not only did the Basel airport close at midnight, but so did all the airports in Switzerland. Astonishing.

At any rate we finally landed in Lyons shortly before 2 AM. We were then told the bus would arrive at 3 in order to give us time to go through customs. It didn't arrive until almost 4 AM, supposedly because it had to come from Geneva. Meanwhile, we started to get worried about not making our train at 10:45 because the bus was not due to get to Basel until 10 AM. I went back to talk to the Swiss girls once again, who said that it would take that long because of Swiss rules that said they had to switch drivers after four hours, and then we would stop for breakfast for 1/2 an hour. Not to worry, they said, we would still make our train on time. They would help us get from the airport to the train station. We did stop for breakfast, and since we had no Swiss Francs, one of them insisted on paying. It came to the equivalent of $34 US for three small coffees, croissants, and a yogurt. At these prices, it was a good thing we were just passing through. We arrived slightly early. The girls were headed for the Swiss railway station and we went with them part way, until we had to get off and transfer to another trolley to get to the German railway station. They paid another 8 Francs for our tickets, because for some reason our credit card didn't work. Wonderful people.

We arrived with about 15 minutes to spare, exhausted after no sleep, and Nanette appeared to have caught Dan's cold. The train ride was, thank God, uneventful. When we arrived in Friedrichshafen, after searching around for a bit, we found and recognized Antonette, after four years and knowing each other for all of a week. We drove the 45 minutes to Wangen, stopped to get bread, and then went on to their farm, another 15 mintes away.

Joachim, Nanette and Antonette, in Wangen 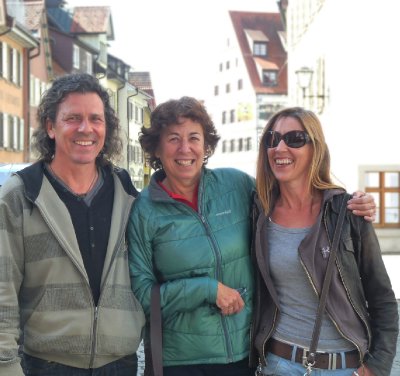 She and Joachim had sold the adjacent old farmhouse, and were engaged, along with their friend Peter and his family, in reconstructing the old cow barn, probably four times the size of our 3000 square foot house. They will make it into into two large apartments. Peter is an architect, and without him the whole project would not have been possible.


The construction site after an early April snowstorm 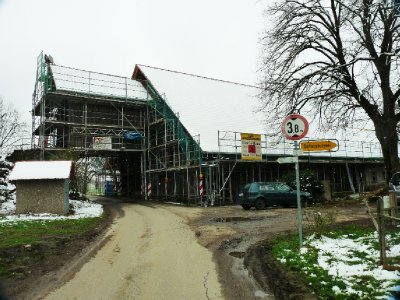 We were staying in a nearby outbuilding, which they had partially renovated. The bathroom and toilet were not yet finished, for which they apologized profusely, but we could use the bath in the old farmhouse, where Peter,Lissie, and Max were staying until the new owners moved in. 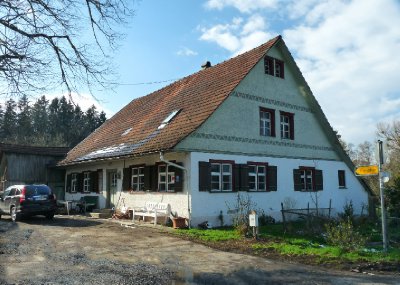 Where were Antonette and Joachim staying?

In Wangen, in an upstairs apartment in Joachim's father's house. When we left, they would move into the outbuilding until the big barn was habitable.

We chatted about their sailing adventure. They recently spent three years sailing up the coast of South America, one of which was a year docked off the coast of Argentina. It was the first time either of them had owned a boat. We thought they had a broken mast, but it turned out not to be quite so serious, only a torn main sail. In China, we talked about meeting them in the Caribbean and sailing to Cuba, but it took them a long time, and they only made it as far as Tobago. They sold the boat and moved back to Wangen, a town of about 17,000, near where they both grew up. It is easy to see why they returned. The place has a very bucolic feel, with verdant rolling fields, patches of woods between the old farms, and in the distance, the snowy Alps of Switzerland in one direction, Austria in the other. 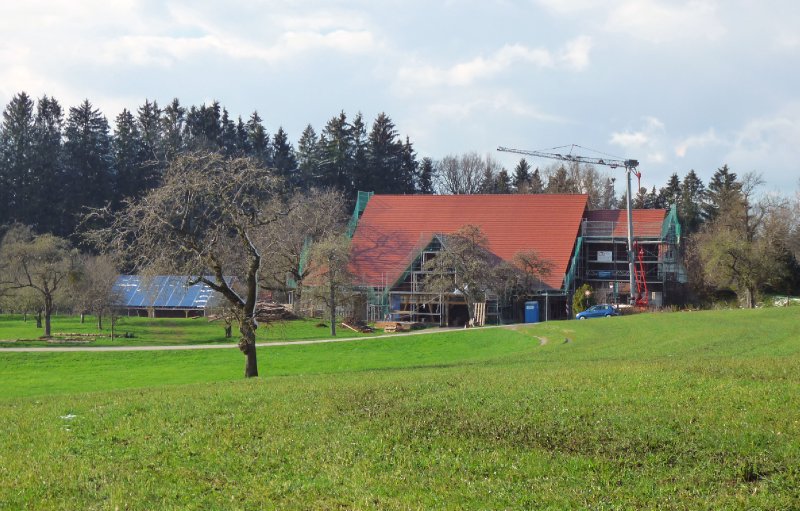 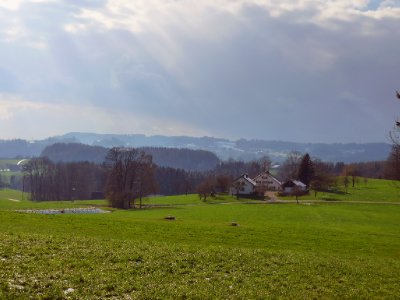 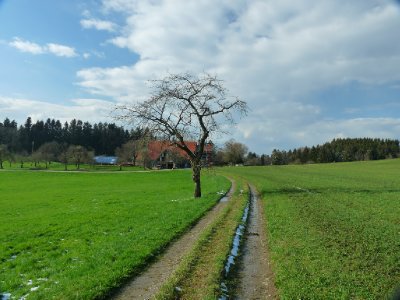 Their new plan, is to finance the place in part through the production of Cidre, hard cider, which they will make from their own apples and pears. It is not unlike our apple cider, but more subtle and bubbly, with the alcohol content of beer. They also plan to distill and sell schnaps, also from their own fruit and berries. This is Joachim's idea. How did he learn to do it? Mostly from reading about the process. He would give Helen and Scott Nearing a run for their money. They also plan to do much of the finish work in the barn by themselves, and then to spend the winters in Thailand or some other warm place.