This section of Vagabonding describes a journey to Asia begun in February of 2008. It centers on a four month stint in which Nanette and I taught English in China, and was book ended by a tour of Indo-China (aka Southeast Asia), and northern India.

The idea for this excursion first germinated on a blue-bird day in the mountains near Lake Tahoe in California. We had taken a break from skiing and were hiking along a river bank not far from the Nevada border. It was one of the many picture perfect days days they seem to have out there, early Spring, temps in the 50's, but with a warm sun that made it possible to sit out on the rocks without being cold. This was the tail end of living out My Ski Bum Fantasy, as I like to call it. Following our Latin America trip described earlier in this blog, I got the idea that I wanted to spend a winter skiing out west, and I chose to do it in California because both of our kids were living in the Bay Area at that time. I began this particular fantasy by taking a demanding bar-tending course in Albany, somehow imagining that I would ski all day and then tend bar at night. Well that might have come to pass if I had lived out this fantasy in my 20's or 30's, but not in my late 50's. I hadn't reckoned on the fact that after skiing all day, I would be too exhausted to do much more than cook dinner for myself and crash into bed about 9 PM. And of course, no one wanted to hire an alta-cocker (aka old fart) like me to tend bar anyway. Especially in a ski town, they all wanted some young hunk, despite my perfect bar tending background as a psychologist.

But I digress. As we rested on those warm rocks by the stream we discussed what we might do the following year. I was ready to take off again on another big trip, my wanderlust having been ignited by South America. Of course, I was already off, as it were, having just spent the winter, as I said, skiing, but no matter, I was raring to go once again. China was actually Nanette"s idea, and so was the teaching thing. After all, we didn't speak a word of Mandarin, and how would we learn anything about the culture just by moving about constantly. When we got back home two weeks later we researched the idea, and found out that it was ridiculously easy to get jobs teaching English in China, complete with an apartment and a salary that would help finance our travels.

And so it was in February of 08 that we took off, first to Southeast Asia ,and then to Xiamen, China, to teach for one semester in a private English college known as WECL.

We began by flying into Hong Kong, courtesy of frequent flier miles. We stayed in Kowloon in a hotel that seemed to have few foreign tourists. It was mostly Asian and Chinese businessmen.

View from our Hotel Window 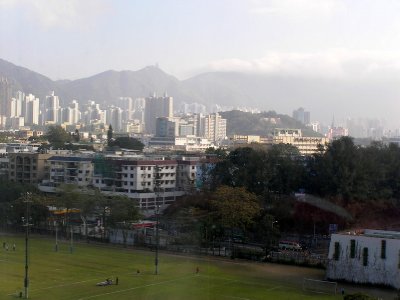 We only spent a a day and a half here, walking mostly, and gaping up at the enormous skyscrapers. The city surprised us with both how clean it was, and how green. It is built on a series of hills surrounding the harbor, and several of the outlying areas have been converted into large parks that have a wilderness feel to them. We didn't get much time to explore them given our time constraints, but just wandering around the downtown streets, taking the half mile long escalator, checking out the expensive shops with what were most likely pilfered antiquities, was an interesting experience. So was going to the noodle shops, one of the few inexpensive places to eat. Fewer people spoke English here than I would have thought, and our few, and I mean very few words of Mandarin we had painstakingly memorized, did us little good in Cantonese speaking Hong Kong. If we thought something looked good, we would point to it. The emphasis here is on thought, though we did manage to avoid the chicken feet, at least for a while. They also had pictures of dishes in the windows, but these too were often hard to decipher. We got quite good at the pointing technique over the next several months, as you might imagine. Overall, they were tolerant of us, though I don't know how many Brits and wealthy businessmen would frequent these local eateries.

And then it was on to Bangkok.